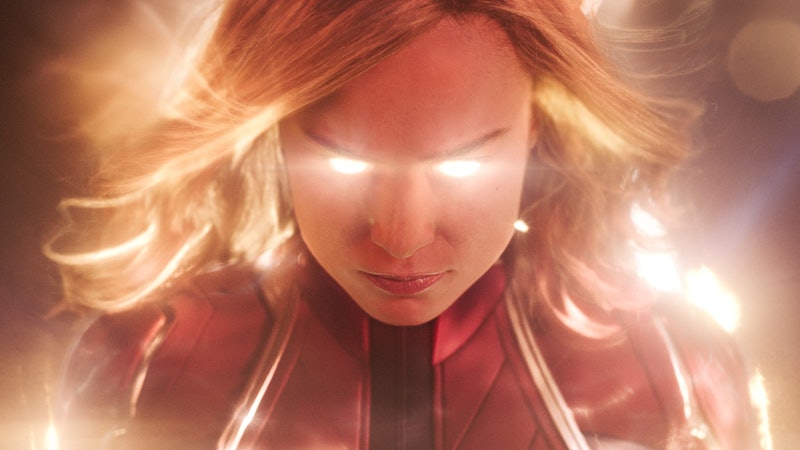 Major spoilers for Captain Marvel ahead. By now, you've probably seen Captain Marvel and fallen in love with Carol Danvers. But did you know that Captain Marvel actually had a different ending before the final cut that's now in theaters? And it's one that would have created an entirely different vibe for the hit film.

In a recent interview with Entertainment Tonight, the film's editor, Debbie Berman, discussed the choices and viewpoints that went into creating the film, as well as the different ending viewers almost got. "I did actually suggest some tweaks to the ending of this film," the editor said. "It used to end with Carol flying off into space alone, and I found that a bit jarring. Like, where exactly was she going? And what was she doing? It felt like we needed a stronger visual to assert a more specific justification for her leaving and disappearing for so many years."

After the final battle with the Kree and Yon-Rogg, Carol gives Fury the state-of-the-art intergalactic pager and says goodbye to Monica and Maria. She then heads off to outer space to finish the war between the Skrulls and Kree. As Maria gives Carol her pilot jacket, she flies off to meet Talos and his family in the spaceship. But that's the part Berman said was added in. "It gave her more of a sense of purpose and made it easier to believe that she left her newfound life on Earth because she was with a friend we knew she cared about, and for a more specific mission," Berman said. "It gave more resonance and closure to her final moment in the film."

The logic behind that move makes so much sense, it's almost sad to think about what it would have been like to see Carol leave with no destination in mind. As Berman pointed out, the feeling to that scene would have been pretty lonely and could have possibly left viewers with an incomplete feeling. Adding Talos, his wife, daughter, and other Skrulls is a perfect way to insinuate Captain Marvel's mission. This mission, along with other interstellar ones, is probably where she's been since leaving Earth in 1995.

In addition to that editorial change to an earlier cut of the movie, Berman also shared with ET that the music choices also had some tweaks, too. "I think almost every single scene originally featured a different song!" she told ET. "It's part of the process to try a variety of options, and see what was true to the era, but also what resonates the most in that moment — be it emotionally, tonally or comedically. It's through a lot of trial and error, and it took us, as a team, quite a while to get to the place where it ultimately landed, but I feel really happy with the end result."

Despite knowing there were music changes, it's hard to imagine major points in the movie with different songs now. With the lyrics and '90s rock vibe, "Just a Girl" brings Captain Marvel's end fight scene to life in a perfect way.

So whether you're going to see Captain Marvel for the first time soon or the fifth time, you'll find new things to notice or love with each watch. And the next time you see it, don't forget to say a silent thank you to Berman for making sure Carol got the ending she deserved.