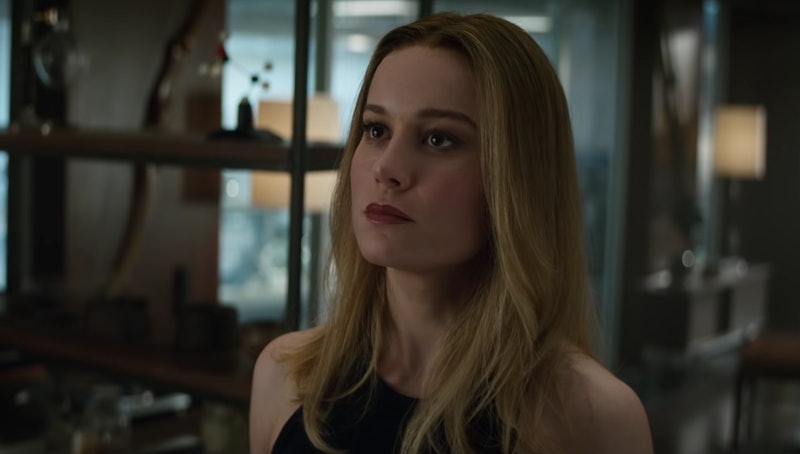 Over the past few weeks Marvel Studios has released a variety of teasers and trailers for Avengers: Endgame, which hits theaters on April 26. One of the most exciting reveals from these clips showed how Captain Marvel (Brie Larson) meeting Thor (Chris Hemsworth) and joining the team, but fans were quick to point out that Larson's character was wearing much more makeup than she did in the Captain Marvel movie. In a recent interview with /Film, co-directors, the Russo brothers, explained Captain Marvel's made-up in Endgame at a press junket. And, it turns out that her bright red lipstick has a pretty good explanation.

When asked about why Captain Marvel was suddenly wearing makeup in Endgame, the Russo brothers explained that the switch was, in part, due to scheduling. Joe Russo told /Film, "She [filmed Endgame] before she filmed Captain Marvel, and I think she was experimenting with what the character was. And those were the choices that she and her hair and makeup team had made." In other words: Larson hadn't settled on her final character's look when she filmed Endgame. He continued, saying, "And I think as she started to gain a deeper understanding of the character, especially as she approached her own movie. She started to make different choices and as an artist she should be afforded that right to make whatever choice that she wants to make."

It makes sense that Larson and the movies' respective makeup artists would approach Endgame and Captain Marvel differently, but it was still a shock for fans to see Captain Marvel's fresh face in her solo film replaced by a more heavily made-up look in Endgame.

Captain Marvel was the Marvel Cinematic Universe's first standalone female superhero movie. It was also the first movie in the MCU with a female director (Anna Boden and Ryan Fleck co-directed), so watching the Endgame trailers, fans were quick to notice any changes to the character that might indicate that she's more tailored to the male gaze. Captain Marvel's non-made up face seems to have resonated with fans who appreciated how Captain Marvel focused on Larson's character's superpowers, intelligence, and personality, rather than her appearance.

Some Marvel fans, like @evesvillanelle, theorized that the Russo brothers were to blame for the lipstick.

In their interview with /Film, though, the Russos claimed that they don't preside over the actors' makeup and hairstyles. Joe said, "We give all the actors ownership over there," referring to the hair and makeup departments. "Every hairstyle that Scarlet Johansson has had and every movie that we’ve done has come from Scarlet Johansson," he said.