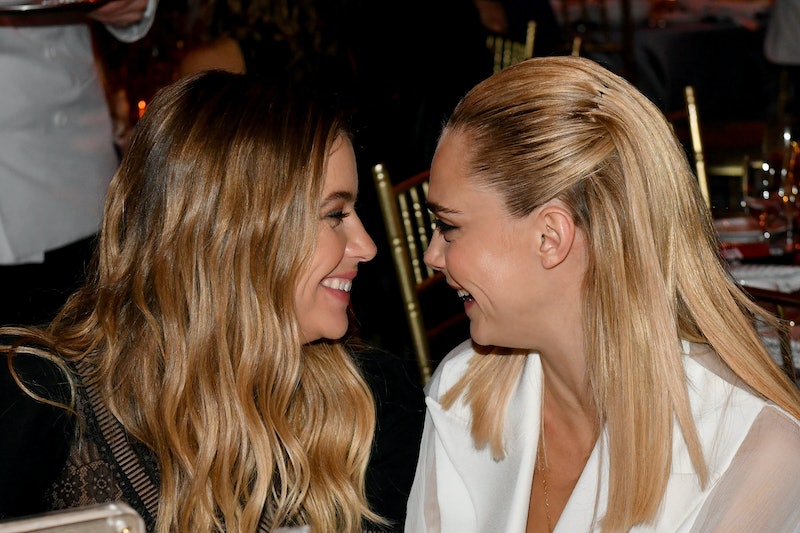 As Pride Month celebrations continue, here's one that is making the Internet flip with excitement. Cara Delevingne confirmed her relationship with Ashley Benson on Instagram Friday, June 14 with a super sweet video. In the post, Delevinge can be seen passionately kissing Benson. She captioned it, "#PRIDE (alongside several rainbow and heart emojis) @ashleybenson." Benson replied to the post with three black hearts, a comment which has been liked over 29,000 times. It was the first time the couple confirmed their relationship, since rumors swirled of their relationship just over a year ago.

At the TrevorLIVE Gala on Monday, June 17, Delevingne told E! News that she posted about her relationship with Benson to celebrate two major milestones: the 50th anniversary of the Stonewall Riots and the first anniversary of their romance. "I don't know because it is Pride, it's been 50 years since Stonewall happened and I don't know," Delevingne explained to the outlet. "It's been just about our one year anniversary so, why not?" However, the model resisted branding the move as going "Instagram official." "Sure, I don't like the official thing, but it's a little something," the Paper Towns offered, although it was a big deal for fans of the couple.

Benson also posted photos from the TrevorLIVE Gala in her IG Stories and shared several videos of herself hanging with Delevingne and pal Georgia May Jagger. At the event, Delevingne accepted the Hero Award for supporting The Trevor Project’s mission of ending LGBTQ youth suicide. On Benson's Instagram Stories, she posted a video of her girlfriend's speech and wrote, "Love you @caradelevingne Proud of you @trevorproject."

After Queer Eye's Jonathan Van Ness and Antoni Porowski presented Delevingne with the honor, she gave Benson an extra shoutout. "I also have another very special woman in this room to thank and you know who you are," Delevingne said, per E! News. "She's one of the people who help me love myself when I needed it most and I really needed it. She showed me what real love is and how to accept it, which is a lot harder than I thought. I love you, Sprinkles." (I'm not crying, you are.)

Speculation about a relationship between the pair dates back to August 2018 when they were spotted kissing at London's Heathrow Airport. Other hints found their way into pop culture ever since. In September 2018, Benson commented "mine" under a photo of Delevingne, adding fuel to the rumors of a romantic relationship. However, the comment was deleted shortly after, causing some confusion. Last month, Benson and Delevingne were seen with a suggestive piece of furniture in front of their L.A. home, causing fans to celebrate their rumored love.

Benson also opened up to People about why she's not down to discuss her relationship status. "I think it's the best way in any relationship," the Pretty Little Liars star explained. "I've always been very private about them, and I think it's just better."

But after one year of happiness, it seems Benson and Delevingne are ready to talk about their relationship a little bit more.