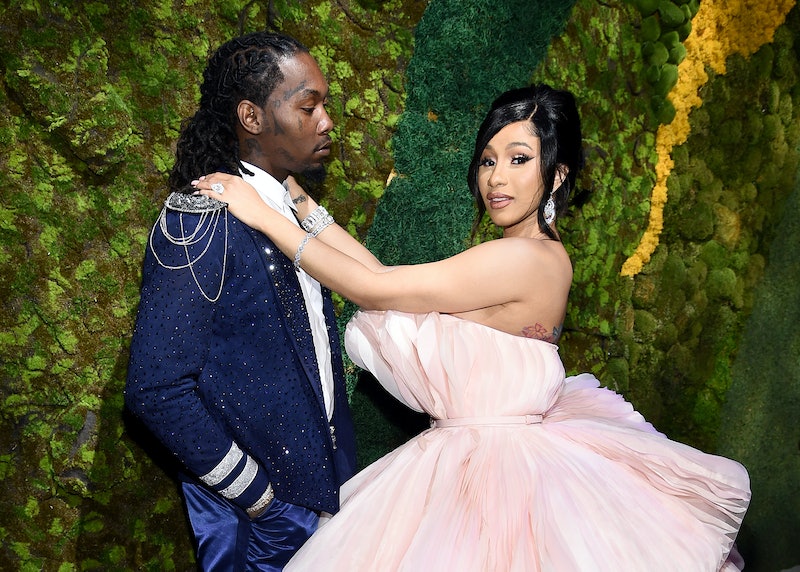 Cardi B has never been one to hold back, even if it involves her husband Offset. In a new interview with Vogue published on Monday, Dec.9, Cardi explained why she forgave Offset for cheating on her back in 2018. The star is the first female rapper to grace the cover of Vogue, and as per usual, she's holding nothing back in her new interview.

As fans may recall, the rap power couple were embroiled in a major celebrity scandal when Cardi announced that she was splitting from her husband in December 2018 after cheating rumors started to sprout on the web. After confessing to his betrayal online, Offset immediately orchestrated a huge campaign to win back her heart, even crashing her set at the Rolling Loud festival to publicly apologize and ask her to take him back — an action many onlookers criticized as invasive. Eventually, his persistence paid off, and a year later, the two are still going strong.

Though the rapper has been open about her relationship status on social media, Cardi opened up for the first time about how they got past the cheating. Speaking with Vogue, she acknowledged that Offset's infidelity was a huge issue in their marriage and that her eventual decision to stay with him drew some major backlash. “A lot of women felt disappointed in me,” she explained. “But it’s real-life sh*t."

However, she said that she had make the best decision for her family without relying on opinions from social media. "If you love somebody and you stop being with them, and you’re depressed and social media is telling you not to talk to that person because he cheated, you’re not really happy on the inside until you have the conversation," she explained. "Then, if you get back with them, it’s like, how could you? You let all of us down."

Even though she gave Offset the gift of forgiveness, Cardi made it clear that the decision to accept him again was a tough one, and vehemently spoke out against infidelity. "Me and my husband, we prayed on it. We had priests come to us," she explained. "He has my back for everything, I have his back for everything, so when you cheat, you’re betraying the person that has your back the most. Why would you do that?" After a lot of hard work, the rapper says the two came to an understanding: "For me, monogamy is the only way."

She ended her explanation with a stern warning: "I’ll beat your ass if you cheat on me.” As always, Cardi B isn't a woman to be messed with.