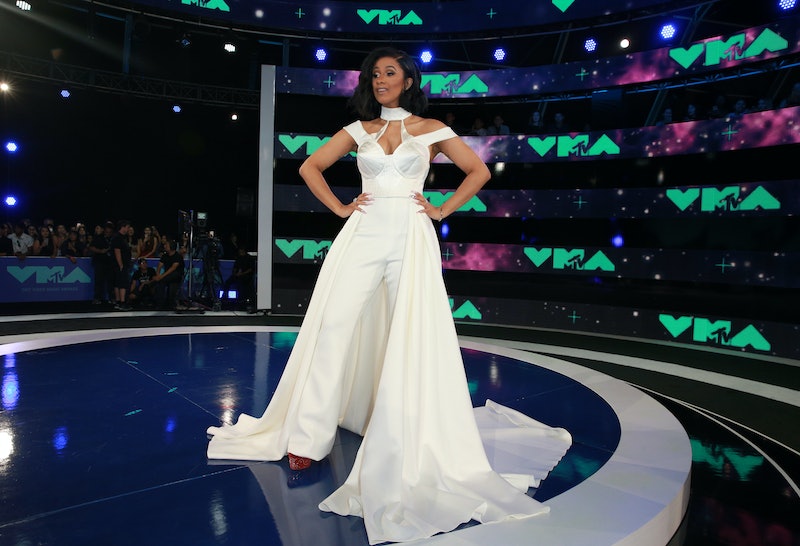 If you're only just getting to know who Cardi B is right now, thanks to her epic arrival to the 2017 MTV Video Music Awards, you're in for a treat. The hip hop artist didn't just come to slay her performance during the pre-show, she also came to slay the VMAs red carpet in custom Christian Siriano, no less. Cardi B's 2017 VMAs outfit pays homage to Madonna's iconic cone bra in the most badass, high fashion way ever.

Cardi B may have made waves in the sparkly, silver sequined bodysuit she wore when she rapped "Bodak Yellow" for the masses on Sunday evening, but all eyes were on the gorgeous white jumpsuit she arrived in, with its flowing skirt, choker detailing, and yes, cone bra accents.

Christian Siriano took to Twitter himself to express his excitement for Cardi B's ensemble, saying, "Love my girl @iamcardib wearing custom Siriano tonight at the #VMAS #chic #cardib." While he did not make mention of Madonna, it's obvious that the conical shape of the halter top was inspired by the Queen of the MTV Video Music Awards. How could it not?

Cardi B complemented her all white look with the perfect pop of color — red heels. She wore her hair in a simple, sleek lob and kept her makeup light and natural, with a winged eye and a nude lip.

Her badass stance really brings the outfit to the next level.