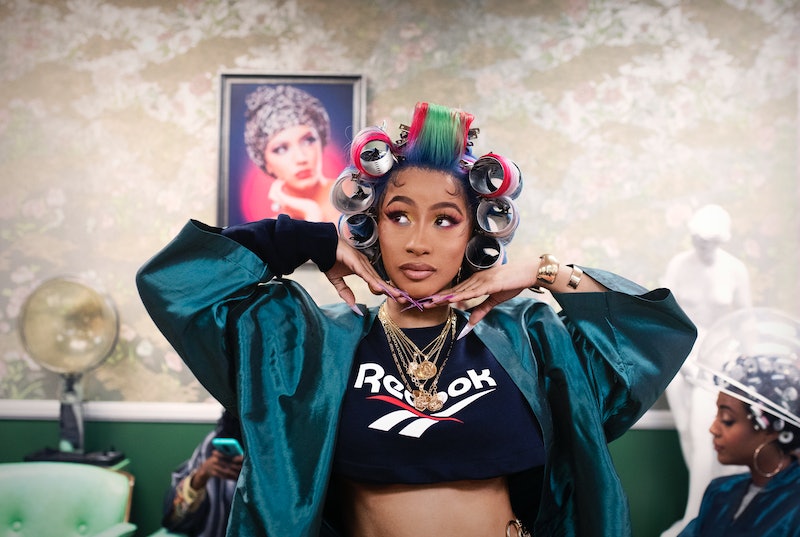 There’s something about a fresh set of acrylic nails that gives empowerment a whole new meaning. In Cardi B’s “Nails” Reebok ad, the magical powers in her three-foot long tips is the kind only manicure lovers like the rapper herself could dream up.

In the video ad, Cardi stars as her “regular degular shmegular girl from the Bronx” self before fame in her local salon where she and a group of salon-goers are chatting it up. As she debates with her neighbor under the hair dryer about the guy who’s “not cute enough not to call [Cardi] in two days,” her Reebok Classic Club C Vintage shoe laces come undone. Once the salon patrons side-eye her wardrobe malfunction, Cardi B lets her pink acrylic tips grow quadruple times its length to tie the '80s originated sneakers as fellow customers watch in amazement.

The campaign focuses on Cardi’s real-life experience (with a hint of majestic realness) rather than a celebrity placement. According to a press release from Reebok, the Reebok’s “Sport the Unexpected” platform celebrates the bold and fearless attitudes of people who exemplify the unexpected, hence Cardi's timely unapologetic personality in the short film.

The rapper has been one of Reebok’s brand partner since November 2018, with this fun and mystical ad being her third partnership. Needless to say, it'll be a fan favorite.

“Working with Cardi on 'Nails,' we aimed to create a moment that is authentic to Cardi while breaking convention and doing something more engaging than a typical celebrity cameo," said Inga Stenta, senior director of Reebok global marketing, in the release. "We took a different path putting her in an everyday-type situation that shifts in an unexpected manner, by spotlighting the iconic Reebok Club C in a completely unique way.”

Fans can actually shop the sneakers Cardi sports in the video. The Club C 85 Vintage sneakers that were originally released in the '80s as a performance tennis shoe are getting a relaunch. Plus, shoppers can nab these nostalgic kicks in the green logo (as seen in the video) or the blue shade logo.

Cardi has a thing for decades past when it comes to her Reebok campaigns. When she dropped her first Reebok campaign in February, the theme was a throwback to the '90s to bring one of the "dad shoes" of the decade back to center stage with the Aztrek sneaker. Photographed and filmed in her hometown of the Bronx, Cardi shot with a pair of orange Aztrek sneaks flexing like the unexpected should. In her previous campaign, Cardi played a round of '90s trivia, but didn't quite nail every question. Considering Cardi was born in the '90s, it makes sense.

Cardi B has once again made her Bardigang proud having brought together some imaginative ideas that combine her hometown with the nostalgia of a classic sneaker brand. Some say you can take the rapper out of the Bronx, but you can't take the Bronx out of this hustler.

More like this
This 'One Tree Hill' Wardrobe Error Is Going Viral On TikTok
By Brad Witter
30 Of Kendall Jenner’s Best Runway Looks To Date
By Dominique Norman
Looking Back At Kylie Jenner's Best Fashion Week Looks
By Allie Fasanella
All Of Doja Cat’s Wildest Paris Couture Week Looks
By Dominique Norman
Get Even More From Bustle — Sign Up For The Newsletter
From hair trends to relationship advice, our daily newsletter has everything you need to sound like a person who’s on TikTok, even if you aren’t.