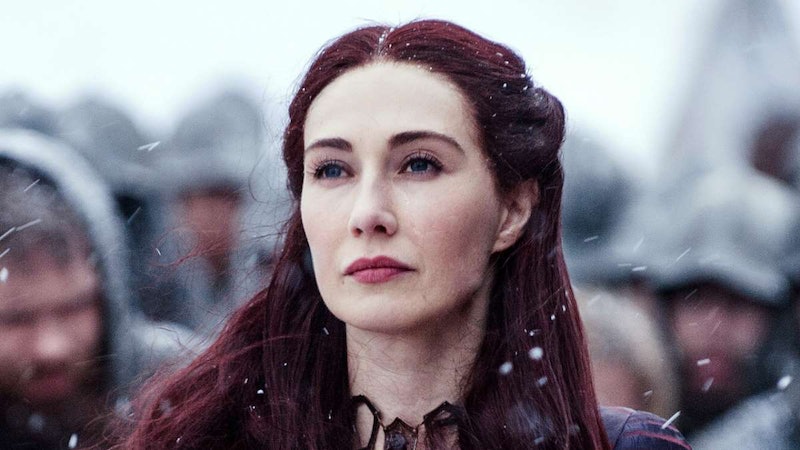 It feels like a million years since the finale of one of the most talked-about TV shows in history, Game Of Thrones, laid down its swords and finished forever. It was a final season that was controversial for a whole bunch of reasons. However, in its earlier seasons, the show courted controversy for an entirely different reason. Because of the level of female nudity throughout each episode, which some considered excessive in places. One female star from Game Of Thrones has spoken out about female nudity in the show.

Carice Van Houten, or the Red Priestess Melisandre to you and me, was one of the female characters who was frequently nude. From the very beginning of the show, her mysterious character was disinclined to cover up, which was not the best experience for Van Houten. She spoke to Deadline about the experience, saying her Dutch roots made her more comfortable in her skin but that it still wasn't her "favourite thing in the world at all." The actor explained:

"But it's never comfortable being the only one undressed on set. It was before I had a child. I would be more uncomfortable now. The times have changed in many ways. Back then, it was all a little overwhelming. No one forced me into anything, but in hindsight I might have been a little more cautious with it."

When asked if the #MeToo movement and more openness regarding sexual harassment in the showbiz world affected how much nudity was in the shows, she responded: "Yes. It also showed that you don’t need it."

However, not all female stars of the show feel quite the same. Another star who often had naked scenes was Emilia Clarke. Clarke spoke to The Sun about her nude scenes and said she regrets nothing:

"There's not one part of the show that I would go back and redo. People ask me the nudity question all the time. But the short answer is no, I would never change anything. You had to see those sex scenes, as they couldn’t just be explained."

From the get-go of the series, rape and nudity featured heavily in Game of Thrones, and, for some viewers, it became gratuitous at times. "[David] Benioff and [Dan] Weiss have gone out of their way, time and time again, to ramp up the sexual violence well beyond their source material," Christopher Orr wrote in The Atlantic back in 2015. Speaking specifically about the treatment of women in the show, Gabrielle Bruney wrote for Esquire:

"My breaking point had come ... with the second season episode in which then-King Joffrey both ordered Sansa half-stripped and beaten, and then demanded at the point of a crossbow, that prostitutes bludgeon each other for his enjoyment. For me, those scenes made it clear that Thrones was a show willing to mount its action upon the stage of women’s bodies. While the series’ treatment of women has improved in the wake of the outcry over Sansa’s Season Five assault amidst a media-spanning bar-raising for how fiction handles female characters, misogyny is Game of Thrones' original sin."

While some were critical of the violence against women, Sophie Turner, who played Sansa Stark, had a different point of view. Sansa's assault in season five, which Bruney points to above, was one of the most talked-about issues in the series, and even led some fans to boycott the show, as ITV reports.

However, for Turner, this scene was a turning point in terms of her engagement with issues raised on the show. "My active interest in women's rights and the fight against domestic violence only really became acute after one of my scenes from season five of Game of Thrones aired," she wrote in an article for Huffington Post. "To be completely honest, my initial reaction was satisfaction: That rape, domestic violence and systemic sexual inequality is something we are capable of talking about; that we are capable of creating and sustaining a visible public dialogue. I don't think it's easy to overstate the importance of that dialog; if, by seeing us tell that part of Sansa's story, 10 survivors of sexual violence felt empowered to talk about their experience, I'll happily put up with the Twitter storm in a teacup."