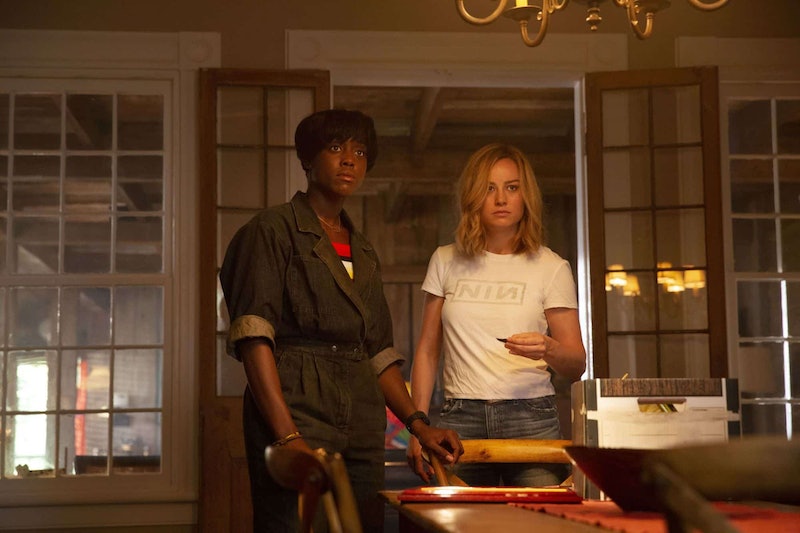 As the Marvel Cinematic Universe continues to increase representation of women and people of color, it's not just executives, directors, and writers who are pushing for more. Debbie Berman, who edited Spider-Man: Homecoming, Black Panther, and the MCU's latest blockbuster, Captain Marvel, has tasked herself with telling the richest stories possible. And with so many hours of raw footage, a film is nothing until an editor gets their hands on it. In her role, Berman isn't just constructing thrilling action films, but also helping to ensure that these massive movies are fairly and fully showcasing their female characters.

Finding the tone of Captain Marvel meant finding a balance of action and moments of intimacy, according to Berman. “On one hand, it is an exciting action-packed space adventure, and then there were moments were it is real and raw and grounded and emotional, and then other moments where it is laugh out loud hilarious," Berman says. To achieve the feeling she wanted, Berman says that she let emotion dictate her work.

“There are a multitude of narrative and performance options available, and I always lean into what engages me, whether it makes me laugh, cry, or cheer the most," she sums up.

This method made a particular impact on how Berman edited the footage of Captain Marvel's central female friendship. Partway through the film, Carol Danvers (Brie Larson) reconnects with her fellow pilot from her days in the U.S. Air Force, Maria Rambeau (Lashana Lynch). Carol doesn’t remember most of her past from before she was brought to the alien Kree planet Hala, but she senses that Maria was important to her, and the two hardly seem like strangers when they reunite. Berman initially says that all of her favorite scenes in the movie are Goose-related, but, after a moment of consideration, she brings up the scene where Carol and Maria first sit down and catch up with each other.

“As an editor, so many of your scenes change many times through the making of the film, but this one is almost identical to my original edit,” Berman says. “Part of that is because the moment is so real, and the performances are so raw and powerful, and I simply let the scene speak for itself, adding that she "enjoyed slowing down to feel this very real moment of human connection.” For this scene, she made the unusual choice of holding the scene on a wide shot, which she anticipated getting some pushback on. “But everyone loved it, and to my delight supported the idea of just holding on the wide, letting the scene breathe, watching the two of them interact, and feeling the space between them, and then allowing it to become more intimate. It's a very powerful moment," she says.

And setting up Maria and Carol to shine in Captain Marvel is not an isolated incident. Berman has a history of making sure Marvel women get their due onscreen. While editing Spider-Man, Berman got that spidey-sense that something was off about Liz Allen (Laura Harrier) and Peter Parker’s (Tom Holland) relationship. She understood why Peter liked it-girl Liz, but what attracted Liz to Peter? Who was Liz, really? Berman’s infamous persistence reared its head again, and she sat down to write a long email to director Jon Watts and other executives arguing her point.

“We ended up reshooting her side of a few of her interactions with Peter, and it made her character feel more genuine and their connection more real,” the editor says. “Also, if you don't buy their romantic connection, the twist at the end with her father being the Vulture doesn't have as much impact. So I thought that served not only her character, but also the film overall.”

Spider-Man isn’t the only film where Berman pushed for reshoots for story reasons. “On [Black Panther] we were given the absolute gift of a phenomenal ensemble of powerful women,” says Berman. She remembers that originally, in the scene where the Jabari Warriors save the surrounded Dora Milaje, all of the Jabari performers were male. "I went to [director] Ryan Coogler and spoke about how we had these females be so kickass throughout the film, but when they are ultimately saved by the all male warriors at the end, it really undercuts so much of the work we did building them up," she says. Even though it meant reshooting a portion of a major battle sequence and making new costumes at the last minute, Coogler made sure Berman’s vision was carried out.

Despite her recent success, before Spider-Man, Berman didn’t have the credits that would normally get an editor considered for a Marvel movie; most of her previous work was in indies, such as Space Chimps (2008) and the meta-slasher flick The Final Girls (2015), as well as some television. But she didn’t let that deter her. Luckily, she had people backing her up. Her agent as well as Dan Lebental, her mentor and eventual co-editor on Spider-Man, pushed Marvel to meet with Berman. “Once that door was slightly ajar, I fought like hell not to let it close,” she says. “I was relentless in my passion and persistence pursuing Spidey, and I was lucky that at some point they decided it was easier to give me a shot than to have to keep listening to me arguing to get on the film," she says.

Berman started her career in her home country of South Africa, eventually moved to Canada, and then, finally, to America to take on Hollywood. And to get her first big blockbuster, she had to be persistent as hell. “People said ‘no’ a lot,” Berman recalls. “But I didn’t let that bother me. I felt like it was an annoying part of the conversation we had to get through to get to the ‘yes.’ I Googled every single detail I could find about Spider-Man and used every piece of data I acquired for an intellectual argument as to why I was the best fit.”

The editor had a different approach when she was trying to get hired for Captain Marvel, but one which was no less impassioned. Knowing that she wanted the job from the moment the movie was announced, she hatched a plan and set it into motion while still working on Spider-Man. She bought a Captain Marvel T-shirt and proceeded to wear it every time she knew Marvel Studios’ president, Kevin Feige, and the other Marvel executives were coming into the bay, in the hopes of creating a subconscious association.

She eventually met with the co-directors, Anna Boden and Ryan Fleck, and got hired for the film. “The day after they wrapped the shoot we were all in editorial together, and I was wearing the same Captain Marvel shirt. Kevin Feige came over, and one of the directors looked at me and said, 'Wow, this looks really old. Is it vintage?'" Berman says. "I replied, 'No, it's just really well worn'. And then Kevin Feige piped up, 'Oh yeah, she wore that on Spider-Man ALL THE TIME.' I guess I wasn't as subtle as I thought I was."

And now that she's in this position at a major studio, Berman is committed to helping more women up the ladder, as her champions did. “One of the problems, I feel, is that even when women do get hired, they are usually at the lower levels, and not the higher positions, and it becomes a cycle of not having ever done the job, and therefore not ever getting the job," she says.

Berman took steps when hiring her Captain Marvel team to help break that cycle. “I hired Kimberly Boritz who at that time had mostly smaller credits, but I could tell she was an absolute rockstar and hungry to prove herself, and bumped her up to the primary first assistant editor on the film, which is a massively important and stressful job on a project of this size," she says, adding that Marvel was impressed with Boritz's work. "In fact, on Captain Marvel both of our first assistants were female, which is pretty much unheard of.” Berman also says that she sometimes lets a first assistant edit a scene so that they can get their first editor’s credit, and can then build their career on that.

It’s the little things that loom large for Berman, though she's on a streak of shaping huge tentpole movies. Where would Captain Marvel be if Carol’s relationship with Maria wasn’t emphasized? Would Black Panther’s trumpeting of female warriors mean anything if men saved them in the end? These details are what make these films more than just fluff — and Berman is paying strict attention.