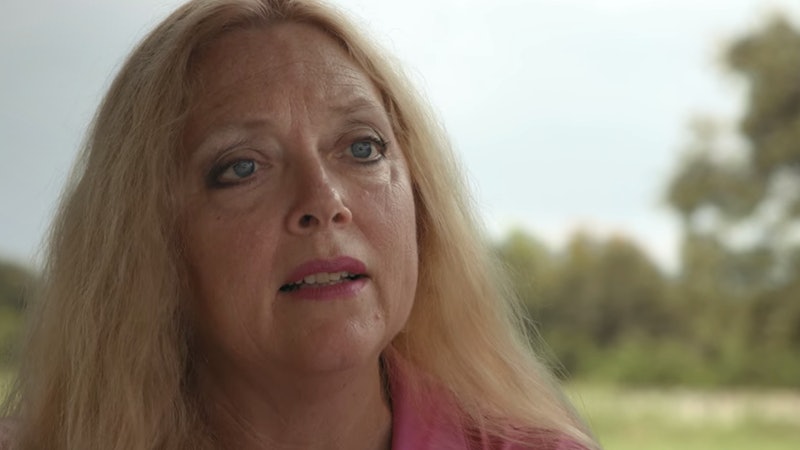 The story surrounding Carole Baskin's second husband, Jack Donald Lewis, is only getting weirder. The will of Baskin's missing husband was allegedly forged, according to Hillsborough County Sheriff Chad Chronister. During a June 2 interview with Tampa Bay's WTSP, the local Florida sheriff declared that Lewis' will is "100 percent a forgery." (Baskin has yet to respond to the forgery claims.)

"We knew that before," Chronister said about the will potentially being forged, before adding, "The problem was the statute of limitations had already expired. The will had already been executed at that point." As for why no legal action has been taken, the sheridff explained that the will had been originally ruled as valid. "A judge deemed it valid, so the civil side of it would be execution of the will, the disbursements of the funds is one thing," Chronister explained. "But then you have the criminal side of it, it's unable to be prosecuted because of the statute of limitations."

In May, Lewis' friend and former lawyer Joseph Fritz told Fox News he believed his client's signature was "traced" on the will that ultimately rewarded Baskin up to an estimated $10 million at the time. Also in May the Clarion-Ledger reported that neither the notary on the will and power of attorney remember authenticating the documents. The newspaper also revealed that two different handwriting experts said Lewis' signature appeared to be "traced" from his 1991 marriage record. Now, Chronister is confirming these reports.

Lewis disappeared in 1997 and was declared dead in 2002. His disappearance was a big part of Netflix's hit documentary Tiger King, which featured claims that Baskin was potentially involved in Lewis' disappearance. Baskin's rival, Joe Exotic, even claimed that she may have killed Lewis and but his body in a meat grinder to feed it to her tigers. There are also other claims that Lewis' body is buried under a septic tank on the Big Cat Rescue property. Baskin has repeatedly denied that she had anything to do with Lewis' disappearance, calling the allegations "the most ludicrous of all the lies" in a March 22 blog.

In April, Chronister revealed they were reopening Lewis' case. He also previously told WTSP that he thinks Lewis was "murdered." In his latest interview with WTSP, he gave an update on the case, saying that they are currently working on some "great leads" regarding Lewis' disappearance.