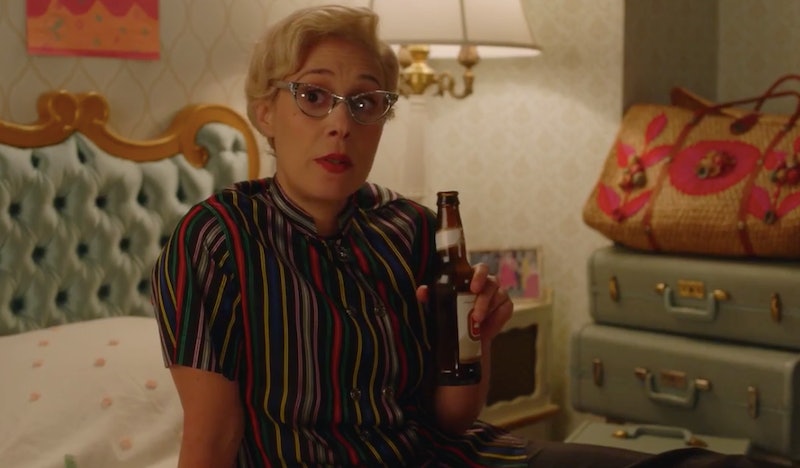 Light spoilers ahead for Season 3 of The Marvelous Mrs. Maisel. It may not be entirely clear if The Marvelous Mrs. Maisel's Shy Baldwin is based on a real person, but there's no question that his bassist Carole (Liza Weil) is meant as a stand-in for Carol Kaye — aka the First Lady of Bass. According to The New York Times, she played for celebrated artists including Sam Cooke, Ray Charles, Johny Mathis, and Nancy Sinatra, and remains one of the most recorded musicians in history.

Everything from Weil's cat-eyed specs to her matter-of-fact demeanor matches up to Kaye's life as a musician in the '50s and '60s. In the show, she pulls Midge aside to tell her the rules of the road as a woman, and she had a similarly frank approach IRL. "Some guys would get macho," she told Louder in 2018. "Tommy Tedesco would toss a few cuss words my way, but I'd throw them right back at him. After that, he was OK. Hal Blaine loved to swear a lot, and he was quite proud of that. So I learned to out-swear him, which I'm not proud of, but I was doing what I had to do."

As Kaye explained to the outlet, she grew up poor and started playing the guitar at 13. By 18, she was playing paid gigs at clubs in Los Angeles. That's how she landed her first studio session — a producer known as Bumps Blackwell approached her to play on a record with Sam Cooke, and things snowballed from there.

Most of the time, Kaye was the only woman in the room, but it didn't bother her. "In the studios, it didn't matter. I didn't get attitude from anyone for being a woman," she told LA Weekly. "It didn't matter if you were a zebra if you could help make a song a hit.”

It wasn't until 1963 that Kaye actually picked up a bass, and it was only because the bassist at her gig didn't show up. But she was a natural. "I became the number one call for electric bass, which was a brand-new instrument," she continued. "I invented most of the bass lines on the records, plus I innovated the teaching style for electric bass — a brand-new style."

Later, Kaye moved on from jazz and began playing for rock artists like Phil Spector, Sonny and Cher, and The Beach Boys; she brought the literal vibrations to "Good Vibrations." She also worked in the film and TV industry, contributing to movie scores for In The Heat Of The Night and In Cold Blood as well as the theme songs for shows like M.A.S.H., Mission Impossible, and The Brady Bunch. Full lists of her TV and film scores as well as her studio work are featured on her website.

Now, at 84 years old, Kaye sells a catalog of instructional books and videos on how to play bass and guitar, and she also books Skype lessons. "I might be old," she told LA Weekly. "But I'm not done yet."

More like this
Grammys Host Trevor Noah Made Adele's Dream Of Meeting The Rock Come True
By Brad Witter
Linda Ronstadt’s “Long Long Time” Plays A Pivotal Role In The Last Of Us
By Brad Witter
Taylor Swift Visited The 'Glee' Set For This Bizarre Season 5 Episode
By Grace Wehniainen
All The Best Celebrity Reactions At The 2023 Grammys
By Brad Witter
Get Even More From Bustle — Sign Up For The Newsletter
From hair trends to relationship advice, our daily newsletter has everything you need to sound like a person who’s on TikTok, even if you aren’t.