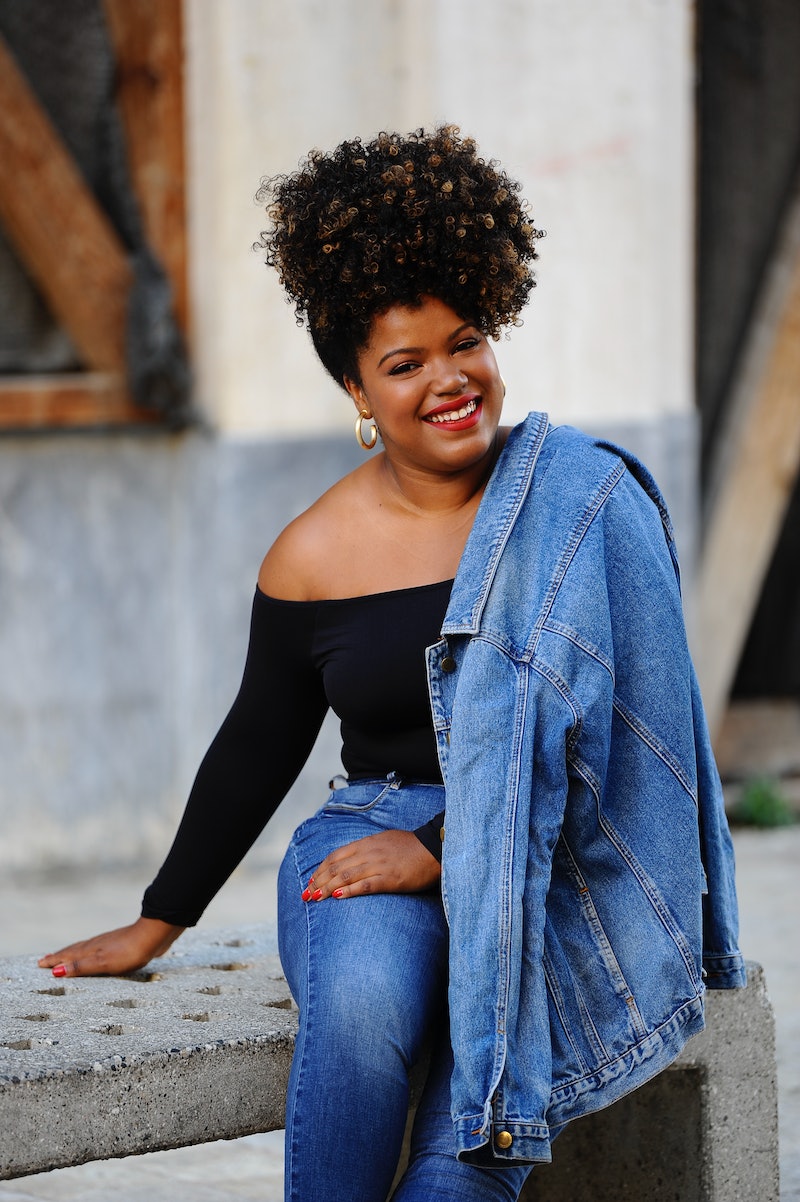 The sun is beaming on down on me as I wait for Carolina Contreras, widely known as Miss Rizos, in Harlem, New York. Once I spot her approaching our meeting spot, Bodega Pizza, the first thing I notice is her pajón — or big hair — styled into a perfect pineapple, not a single strand out of place. After settling into the legendary uptown venue-turned-eatery, it becomes clear how full circle this moment is for the 32-year-old beauty entrepreneur and natural hair advocate.

“This used to be Apt. 78, where I had my first event in New York City in 2012, I believe,” Contreras tells me. "I am so thankful for the people in New York City who have supported me from day one. That’s definitely a reason why I want to come here.”

Contreras, who was born in the Dominican Republic and raised in Boston starting at the age of four, has spent the majority of this decade in her native country teaching Black Dominicans, and those visiting the island, how to care for and style their natural hair. Her advocacy started with the launch of her self-titled blog, Miss Rizos, in 2011, where she still publishes hair tutorials, lists of resources, and empowering messages for those with afro-textured hair in English and Spanish. It was birthed out of Contreras’ decision to stop relaxing her hair, finally big chop after six attempts, and the journey to fully embracing her own curls during her return to the DR in 2010.

Then in 2014, after raising $10,000 through her first Indiegogo campaign, coupled with her savings and generous donations, Contreras opened the first all-natural hair salon in La Zona Colonial, Santo Domingo. She originally started with just a team of two, but today, she’s scaled Miss Rizos Salón to 20 employees and sees over 500 clients every month. Contreras says that approximately 18% of her clientele are little girls, and notes how impactful it is that they’re learning alongside women who look like them to love their natural hair.

“Once girls leave the salon you can see them skipping," says the entrepreneur. "They’re standing a little taller, they’re swaying their hair side to side ... seeing them own their hair and own their power as they’re walking out, and stepping out, it’s just a very beautiful sight to see.”

But despite the natural hair movement becoming more and more mainstream, continuously encouraging customers to build good relationships with their hair is still vital, Contreras explains. Hair discrimination is still a global issue, even across the African diaspora. The Dominican Republic, for example, has one of the largest Black populations outside of Africa, but anti-Blackness, anti-Haitianism, and white supremacy are all prevalent in the country. This racism also manifests in beauty ideals on the island, as people with kinkier textures and darker skin are often seen as less desirable.

The discrimination has become so prevalent that in March, the Ministry of Education (MineRD) in the Dominican Republic released a video showcasing various hair textures and skin tones, and promoting equality for students. It was in response to a student named Omara Mia Bell Marte, 11, being denied access to her classes after coming to school wearing her newly big chopped natural hair. Even Contreras, whose brand was mentioned in the PSA, has faced discrimination on the island for her hair (for example, she and her friends were denied access to a bar by a bouncer because of her curls), but views her work educating her clients on natural hair as a viable solution to the problem.

With the same issues lingering stateside, within the black community, the hairstylist has decided it's time to expand. At NYC Beautycon this past April, she officially announced that the second Miss Rizos location would be coming to New York City by early 2020. Much like before, she once again launched an Indiegogo campaign to raise funds for her new venture, generating a whopping $29,330 before closing. With plans to open in Washington Heights, the future salon will offer a bevy of services that range from $45 to $150, including cuts, transition styling, and protective styles. And, of course, it’ll also reflect Miss Rizos’ personal approach to customer care: provide the resources to help clients discuss and positively affirm their natural hair.

“Through the techniques and knowledge that I’ve learned throughout the years, I can bring [it all] together to help cause change in this space,” she says.

It’s been eight years since Contreras started both her personal hair journey and her empire, but the content she publishes on her original blog still continues to reflect her goal of making other women with natural hair feel great about their curls. But it doesn't just stop there — she also wants to show them it's possible to create their own platforms, too.

“Now, as an entrepreneur, I feel like I have this extra layer of responsibility to show the world that women that look like me can be successful entrepreneurs,” says Contreras, who adds doesn’t see nearly enough Afro-Latina women featured in the business magazines she regularly reads. But she does see visibility increasing in online spaces, especially among her staffers, who’ve advanced professionally, and with the women she engages with at events and through her Instagram account, which boasts 61K followers.

Social media aside, it’s clear that she’s making a major impact on a much more personal level as well. Back in 2015, during a trip to Colombia, Contreras met a woman named Rosi, who traveled from Chocó — one of the poorest areas of the country — to Cartagena in hopes of meeting her at a speaking engagement to gift her some coconut oil from the company Contreras inspired her to start. A year later, the Miss Rizos founder shared the story on Facebook and received a message from Rosi, informing her that she started a collective of Afro-descendant entrepreneurs in Chocó.

It’s a story that still brings Contreras’ to tears.

“A lot of people want to look externally for ways to change the world,” she says. “Often times the answer to how we can change the world is how we’re living in the world, and what we are doing with our own time and resources, and our existence in the world and our power. When we’re doing what we love and we’re walking in our truth, and we’re living life in a very purposeful way, we can inspire other people. We can change things. I think that has been my secret formula.”