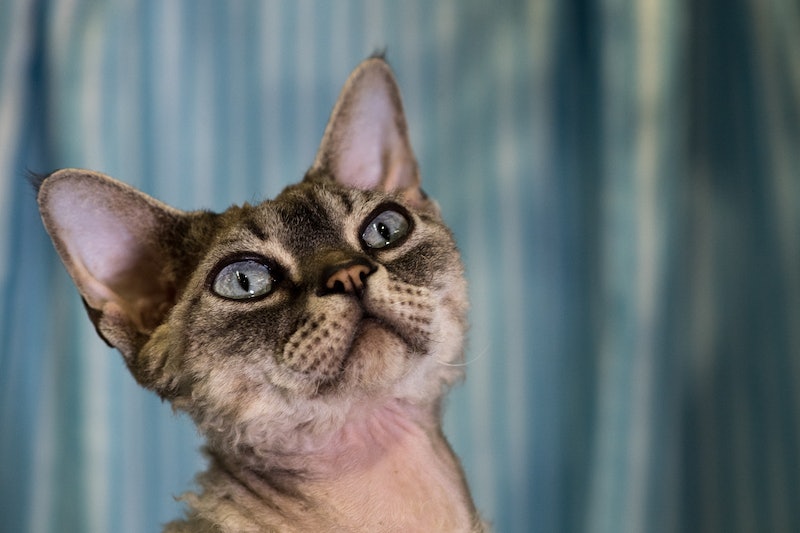 When it comes to smart animals, dogs get all the credit. This is mostly due to their ability to engage with their humans, and their desire to listen, learn, and please. But what about cats? It turns out that cats are as smart as dogs, but felines have been studied far less because they're sooo not into participating in scientific experiments. Any person owned by a cat knows that cats tend to ignore their humans, and are often not interested in learning to sit, stay, and fetch. Frankly, it's beneath them.

I don't know about you, but IMO, independence smacks of smart. Blind obedience is certainly easier when it comes to pets, but it doesn't necessarily mean your dog is any smarter than your cat. According to previous research in Science Magazine, the antisocial nature of cats has led many to believe that cats aren't as smart as dogs — however, a recent study published in the journal Behavioural Processes found that cats scored just as high as dogs on certain memory and behavior tests.

I have two cats and a dog myself. While my dog is whip smart, my cats are equally as intelligent but much more manipulative. Dogs want to please their humans while cats seek to please themselves. My cats know that if they shun their food because they're tired of fish giblets, I might try another one. My dog accepts whatever's being offered without question.

A recent study published in Scientific Reports backs up the research that cats are indeed pretty smart. The study focused on whether or not cats could distinguish their names from other words. It turns out that they can. However, sometimes they don't come when called because they just don't want to. They are, for all intents and purposes, actively choosing to ignore you. While this behavior is certainly rude, it doesn't mean they don't hear or understand you.

"Cats are a highly intelligent species that can be trained to respond to not only their name but also basic commands," Dr. Michelle Matusicky, assistant professor of practice at the College of Veterinary Medicine at The Ohio State University, told PetMd.

According to Dr. Michael Nappier, an assistant professor of community practice in the Virginia-Maryland College of Veterinary Medicine’s Department of Small Animal Clinical Sciences, "A simple way to get along with your cats is to recognize that it’s all about them." He added that when your cat ignores you, kitty might not be in the mood to socialize.

But don't take it personally. "It’s not spiteful behavior so much as the cat simply saying, 'I don’t feel like it right now, so I just won’t do it,'" Nappier told PetMd. "I put it on the same level as someone asking if I want pizza for dinner, but I’m just not in the mood for pizza."

Dogs get all the glory because they're easy to study. Most dogs are food motivated and compliant. Cats on the other hand tend to be uncooperative. You know, maybe they don't want to participate in dumb experiments they haven't signed up for. "I can assure you that it’s easier to work with fish than cats," Christian Agrillo, a comparative psychologist at the University of Padova in Italy who has studied cats, told David Grimm for Slate. "It’s incredible."

While it's true that cats can be frustrating — why won't Fluffy just eat that organic pâté and be happy?! — going your own way hardly means you're not smart. In fact, separating from the herd is often a pretty smart thing to do.

Consider that if a cat ends up homeless, it has a far greater chance of adapting and surviving than a dog. Cats don't need human contact to thrive, they can successfully hunt for food, and they are skilled at finding shelter and evading predators. In fact, in many experiments researchers found that cats will continue to try to solve a puzzle long after dogs have given up.

What's more, an indoor/outdoor cat always finds its way back home no matter how far it roams. Because being studied is not their jam, the minds of cats might forever remain a mystery. Being difficult gives them the upper hand, and I suspect that's just the way cats like it.