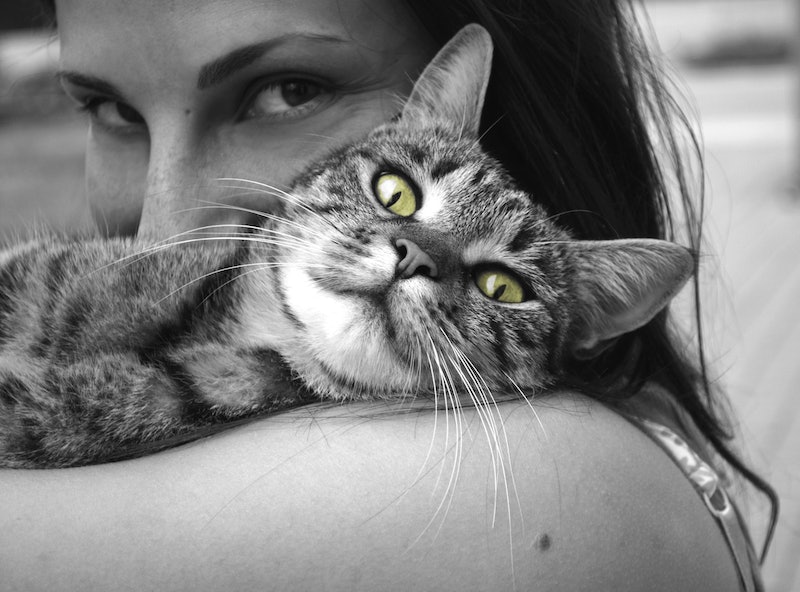 So it turns out there might actually be some truth to the "crazy-cat lady" cliché, and it's all the cat's fault, according to science. An article in the Scientific American reported that cats may cause humans to behave strangely. Not everyone who peppers their social media feed with cat pictures (guilty) is being secretly manipulated by their cat, but new neuroscience research suggests that some cat collectors could be influenced by a protozoan that lives in cats' stool, called Toxoplasma gondii — Toxo for short.

Before you freak out and start trying to re-home Fluffy and Whiskers, not all cats have Toxo in their stool. If you have an indoor cat who never ventures out to stalk prey or riffle around in the garden you likely have nothing to worry about. However, if you have an outdoor cat your little furry feline friend could be at risk.

"This parasite completes its life cycle in cats, and they are the only mammals in which this parasite is passed through the feces and into the environment as part of the life cycle," an article on PetMD noted.

So, just how can your cat pass Toxo onto you? The short answer is by cleaning the litter box and then not washing your hands (you can also get Toxo from eating undercooked meat). The Scientific American advised that while severe symptoms can include brain abscesses and blindness, more subtle symptoms are harder to detect.

How The Cat Gets Control Of Your Brain

While many people are superstitious of cats, felines are not actually deliberately controlling humans. But, if a cat gets Toxo, and transfers it to you, you could start behaving strangely due to the the way the Toxo affects your brain. Oh goody!

"The bug contains an enzyme that creates dopamine, a neurotransmitter. Humans given dopamine pills are at an increased risk of impulsive and risky behavior. Excess dopamine activity is also involved in schizophrenia," Jack Turban wrote in the Scientific American. "Immunologists point out that the known genetic risk factors for schizophrenia include many immune-related genes that could affect the way one's body reacts to Toxo. Theoretically, a strange Toxo-induced immune response in the brain could cause psychosis."

Now, excessively posting photos of your beloved cats on social media does not qualify as psychosis, no matter what anyone tells you. Perhaps what could qualify as strange behavior is someone who hoards hundreds of cats. A simple Google search returned dozens of results for news stories about cat hoarders. And, I personally know a friend who got her cats from a rescue that removed the animals from a cat hoarder in Los Angeles. Apparently each time the woman's cats are taken away she just goes out and gets more.

The stereotype of the crazy-cat lady has a long and storied history, according to a recent article in the Boston Globe. As far back as the 1700s unmarried women were often associated with cats.

"By the late 1700s the modern version of the cat-lady stereotype began to emerge. At the time, as many as a fifth of women didn’t marry. This presented a crisis for households in Georgian England — the Protestant Reformation of the 1540s dissolved convents, so patriarchs couldn’t pack their unmarried daughters off to the nunnery," Linda Rodriguez McRobbie wrote in the Boston Globe.

"Working for a living was frowned on. So unmarried women often became dependents in their relatives’ households. In her book, “Behind Closed Doors: At Home in Georgian England,” Amanda Vickery recounts the trials of one such spinster, Gertrude Savile, who lived on her baronet brother’s charity and died in 1758. In her journal, the embittered Savile wrote, 'Entirely confine myself to my room. . . . That, and my Cat all my pleasure.'”

The aforementioned spinster — whose only company was her beloved cat — was just 30 years old.

If you were raised with cats or have cats now, and you're not experiencing any bizarre symptoms, you're probably going to be just fine. While many doctors advise pregnant women not to clean the litter box, a study published the journal Psychological Medicine found that sharing your life with cats does not increase the likelihood of psychotic behavior anymore than sharing your life with a toaster.

"Scientists from University College in London examined 6,705 adolescents and 4,676 young adults to see if early exposure to household felines contributed to the risk of developing psychotic episodes," Truban reported in the Scientific American. "In the largest and best-controlled study to date, the researchers showed that those exposed to cats were at no increased risk of psychosis."

The study did advise that pregnant women should still get someone else to clean the litter box just to be safe. If you still don't feel safe around your cat, PetMD lists the symptoms of Toxo in cats, just to put your mind at ease. Because, your cat is cute, and they probably aren't trying to kill you.

More like this
The 5 Best Blankets For Puppies
By Jenny White
Picky Eater? Sensitive Stomach? This Vet Nutritionist-Designed Dog Food Has A Plan For That
By Maria Cassano
The 8 Best Crystals For Meditation, According To A Healing Energy Practitioner & Meditation Teacher
By Lauren Moison
Savannah Guthrie Got Her First-Ever Tattoo With This Former Wild Child
By Suzanne Zuckerman
Get Even More From Bustle — Sign Up For The Newsletter
From hair trends to relationship advice, our daily newsletter has everything you need to sound like a person who’s on TikTok, even if you aren’t.