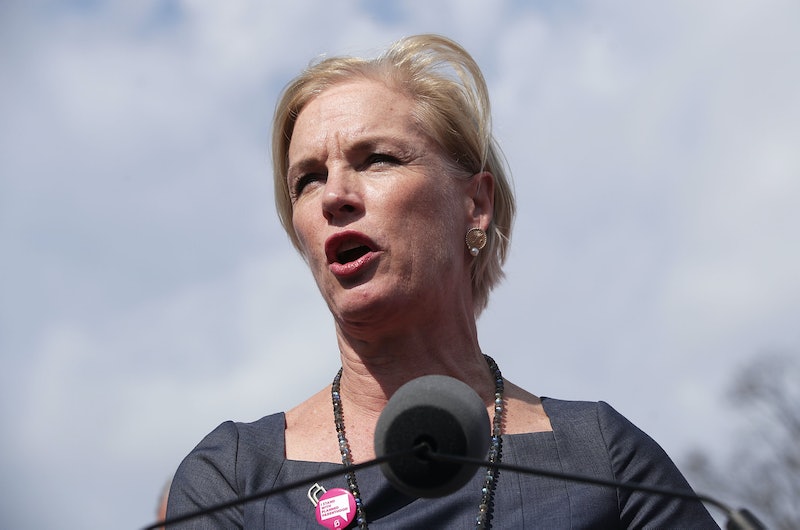 On Tuesday, Planned Parenthood President Cecile Richards joined a round-table discussion of reproductive rights leaders and clinic patients in Kingston, New York, to talk about the potentially devastating health care effects of a bill recently signed by Donald Trump. Last week, Trump signed into a law a new measure targeting Title X grants, which are funds from the government allocated for family planning and preventative health care. Now, Planned Parenthood is at serious risk of losing those grants — and the organization is making it clear just how detrimental that could be for many Americans.

Trump and his fellow Republicans initially tried to cut federal money from going to Planned Parenthood in their attempt to repeal and replace Obamacare. The American Health Care Act included a provision that would have blocked Medicaid reimbursement coming from the government from covering Planned Parenthood services. When the repeal and replace failed, that concern died. However, a new one has arisen.

The legislation that Trump signed last week overturned a rule Obama signed near the very end of his presidency. That December 2016 rule effectively forced states to allocate Title X funds to organizations, such as Planned Parenthood and other health care organizations, and only deny them based on poor service — and not for, say, providing abortions. As ABC News reported in light of Trump's new law, "Overturning the rule means that states will more likely be able to change funding or withhold Title X funds from clinics if they provide abortion."

"My health care is not a political game. ... Every single person should be able to make their own decisions about their health care."

"If Planned Parenthood hadn’t been there for me, I might not be here today."

Jasmine Shea from Albany, New York, said, "As someone who has insurance through Medicaid, my ability to continue seeing the health care provider I know and trust is on the line." She added, "My health care is not a political game. It should not matter who you are or where you live or what kind of insurance you have. Every single person should be able to make their own decisions about their health care."

Heather Kamin from Middleburg, New York, made one of the most powerful declarations of the evening: "If Planned Parenthood hadn’t been there for me, I might not be here today."

Moreover, Kamin said she was confident many others across the country share her sentiment. "I know I am not the only woman who can say that," Kamin said. "There is no dedicated women’s health practice in my county — and we need access to timely, affordable, and expert care. We need Planned Parenthood.”