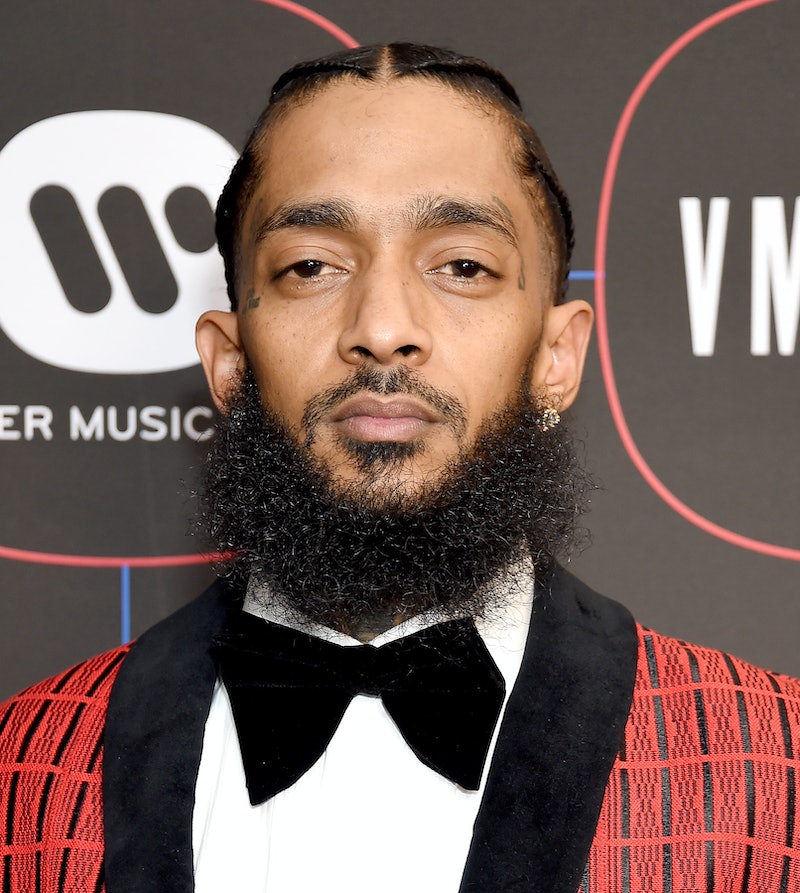 On Sunday, March 31, fans were shocked when news broke that rapper Nipsey Hussle had died at age 33. According to the Los Angeles Times, police confirmed that Hussle was shot outside of his Marathon Clothing store around 3:20 p.m., and he was rushed to the hospital, where he was pronounced dead. Two others were reportedly injured in the gunfire, and it seems the shooting suspect still has not been arrested. And although it hasn't been long since word of Hussle's death has spread, celebrities and his fellow musicians have already come forward to share how much he meant to them.

It makes sense that Hussle made a mark on so many people; although he was only 33, he was already an accomplished rapper. His debut studio album, Victory Lap, earned him a Grammy nomination for Best Rap Album this year, and he was known for his work helping underserved communities. Last year, Hussle opened Vector 90, a STEM center for families and children's organizations that will help them get interested in science and math. And on Sunday night, Los Angeles police commissioner Steve Soboroff tweeted that he and police chief Michel Moore had planned to meet with Hussle on Monday to talk about how they could work together to stop gang violence and help children.

It's already clear that Hussle will be missed, because so many celebrities are sharing tributes to the late rapper that show what an impact he made on them and on music.

Legend tweeted about seeing Nipsey Hussle just a few days earlier, sharing that they'd worked on a song together.

Pharrell brought up the positive impact that Hussle had on his community in his tweet about the rapper, quoting a tweet that included an article reporting his death.

Rihanna shared photos of and with Hussle, as well as a few sweet words for his loved ones.

Posting a tribute to Hussle on Instagram, Drake wrote:

"F*ck. My whole energy is just at a low right now hearing this. We just linked for the first time in years and said we were gonna do a new song this summer cause it had been too long. You were having the best run and I was so happy watching from distance fam nobody ever talks down on your name you were a real one to your people and to the rest of us. I’m only doing this here cause I want the world to know I saw you as a man of respect and a don. Rest easy my g."

On her Instagram Story, Kim Kardashian sent "so much love & prayers" to Hussle's girlfriend, Lauren London, sharing a photo of the couple together.

Jada Pinkett Smith shared a photo of Hussle on Instagram and wrote, "Rest in Love Nipsey. I am an admirer of your wisdom which will now be part of your legacy. My heart bleeds for all those who love him. Stay strong @laurenlondon. He’s an angel on your shoulder now."

Snoop Dogg shared a video on Instagram, along with a caption about remembering the good times they spent together.

Jordan shared a photo of Hussle on Instagram, writing, "Just spoke to you, always kept it 1000. Always was real. Rest up young KING. RIP Nipsey."

It's obvious that Hussle's death will be felt for a long time to come, but if these tweets and Instagram posts are any indication, he definitely will not be forgotten.