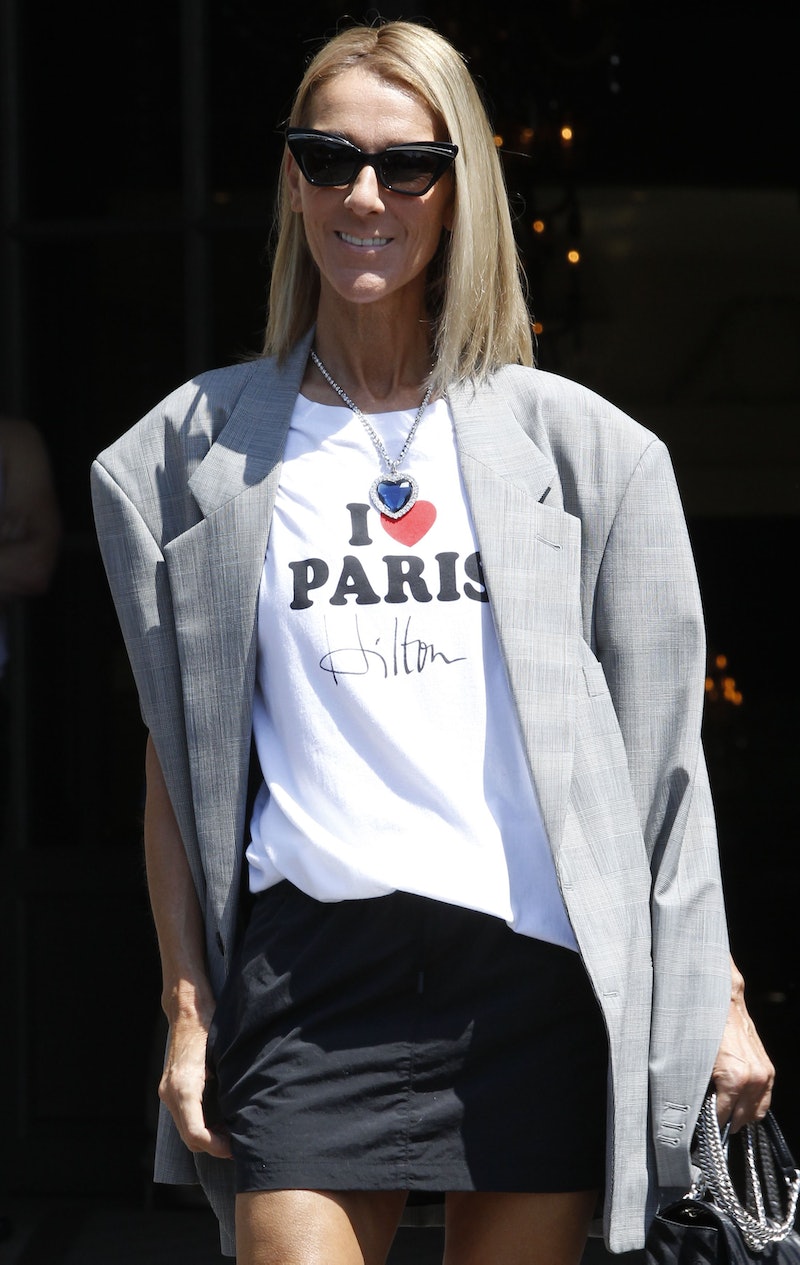 Accessories can make or break an outfit. A statement necklace or a stack of chunky bangles piled high on the wrist can elevate a low key glamsual OOTD into the sartorial stratosphere. That's exactly what happened when Céline Dion wore a Heart of the Ocean Titanic necklace while out and about during Paris Fashion Week. It was the Titanic tribute that you totally needed and the singer rocked it like it was NBD.

As fans are well aware, the Titanic theme song "My Heart Will Go On" is one of Dion's biggest hits and most signature songs. The jewelry was also a critical plot device in the film, as it was eventually tossed overboard and into the sea by protagonist and star-crossed lover Rose DeWitt Bukater. Therefore, it makes total sense for Dion to wear such an accessory. It was a supremely glamorous finishing touch to her street chic ensemble.

According to PEOPLE, Dion wore a costume replica of the infamous necklace, which features a massive blue heart surrounded by lots of smaller stones. Edgy fashion brand Vetements used a similar version in its 2020 runway show, proving that the Heart of the Ocean is indeed a classic piece that is experiencing a resurgence.

Dion's ensemble was anchored — ahem— by two hearts worn in very unique and clever ways. Her OOTD brimmed with late '90s and early '00s pop culture references and she owned it top, bottom, left, right, and center. Perhaps Hilton will return the favor and crush a Dion concert tee!

This isn't the first time that Dion has worn a Heart of the Ocean necklace. She wore Asprey & Garrard's sapphire and diamond necklace, which was modeled after the film prop version, while performing "My Heart Will Go On" at the 1998 Academy Awards. The New York Post reports that the necklace featured a 171-carat stone and was sold for $1.4 million at a charity auction.

Dion has sported other Titanic-themed fashions. In 2016, she wore an oversized Vetements' Jack and Rose hoodie that celebrated the doomed supercouple.

Whether worn in a film that was set in 1912 or IRL in 1998 or in 2019, the Heart of the Ocean necklace is a statement piece. It's iconic on the red carpet but can be dressed down for the streets. Each of Dion's looks is proof of that.

If you want to rock a Heart of the Ocean bauble this summer, here are three options in various price ranges.

This big 'n' blue heart is less than $13 on Amazon. It's a great choice for Titanic Halloween costumers or just 'cuz.

If you want a long-lasting and lab-sourced Heart of the Ocean that you can wear for years, Kay offers this lovely option. You can wear it to prom, a wedding, or on date night.

You really can't go wrong with a bold and beautiful replica that's less than $8. It can be the only accessory you rock this summer and it makes a bold statement.

There are plenty of Titanic-inspired Heart of the Ocean necklaces available if you want to copy Dion's look. Your heart will go on.