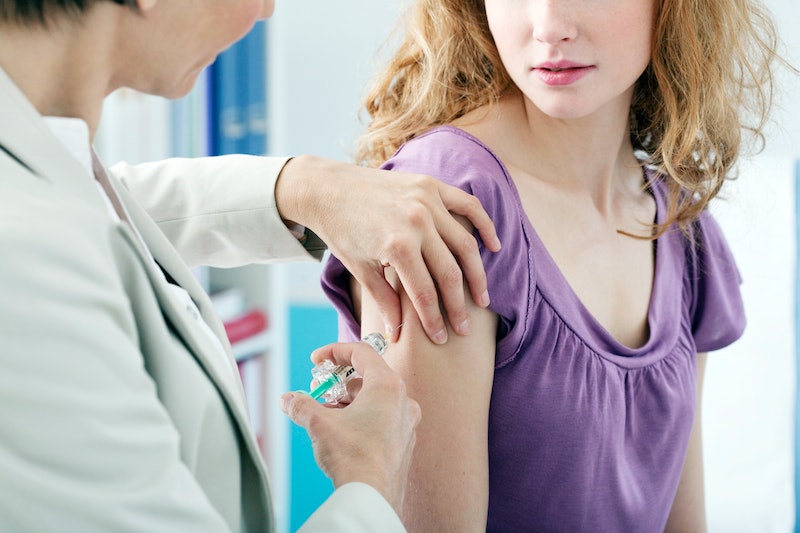 Cervical cancer can be a deadly disease, but the vaccine for human papilloma virus (HPV) has helped reduce the number of people who develop it. New research published in The Lancet now predicts that thanks to the vaccine and routine screenings, cervical cancer could be eliminated in the U.S. in as little as 20 years. This forecast can only happen, however, if everybody has access to the HPV vaccine and regular Pap screenings for cervical cancer. And that, experts say, might be easier said than done.

The new research is based on a study published earlier this year, also in The Lancet, that modeled how HPV vaccines and cervical screenings have affected cervical cancer rates in 78 countries around the world. The scientists took those findings and used two different statistical models to see how long it would be, based on current trends, before cervical cancer was basically a thing of the past in this country. One model predicted that cervical cancer would decrease to less than four cases per 100,000 women by 2038; the other said it would happen by 2046. Considering that the American Cancer Society estimates that 13,800 new cases of cervical cancer will be diagnosed in 2020, the idea that the disease could be wiped out is pretty staggering.

Cervical cancer is easier to eliminate than other cancers, experts tell Bustle, because the combination of the vaccine and screenings is so effective. "All cervical cancer is associated with the high-risk HPV virus, which we can vaccinate for," Dr. G. Thomas Ruiz M.D., lead OB/GYN at MemorialCare Orange Coast Medical Center, who was not involved in the study, tells Bustle. "Pap screenings can also detect pre-cancerous cells long before they ever become malignant." When screenings and the vaccine are combined, they form a one-two punch that keep people from ever getting the disease.

Right now, the HPV vaccine is recommended for boys and girls between 11 and 12, and for anybody who's never had the vaccine up to the age of 26. The study found that 75% of girls and 62% of boys in America will have the vaccine by the age of 21. That's one of the main reasons that cervical cancer is on the verge of being defeated.

However, there are a few factors that might complicate things. One is the anti-vaccine movement in the U.S. "We have to get past the fear of vaccines in this country," Dr. Alix Casler M.D., a pediatrician at Orlando Health Physician Associates who was also not involved in the study, tells Bustle. "Look at Australia, where HPV vaccination is routine; they have seen a 77% reduction in cancer-causing HPV types in the past 10 years, and have one of the lowest cervical cancer rates in the world." In the U.S., she says, vaccination rates have suffered from a combination of fear, lack of understanding, distrust, and paranoia. That prevents kids and adults from getting the vaccine.

Access to Pap smears is also crucial, according to the researchers behind the Lancet study. Dr. Ruiz tells Bustle that cervical screening needs to be available to everybody. "We have challenges in some lower socioeconomic and rural areas in getting women the access to screenings that they need," he says. Research by the Center for Disease Control & Prevention (CDC) has found that poor women were far less likely than wealthy women to have had a Pap test in the past three years. The CDC also suggests that the higher rates of cervical cancer among Black and Hispanic women are partially explained by lower access to Pap tests and follow-up treatment.

A country without cervical cancer is increasingly possible, but there are some hurdles to clear. "With routine vaccination of all children prior to any risk of exposure to HPV, safe and informed sexual practices, and use of routine cancer screening," Dr. Casler says, "HPV cancers could become a thing of the past."