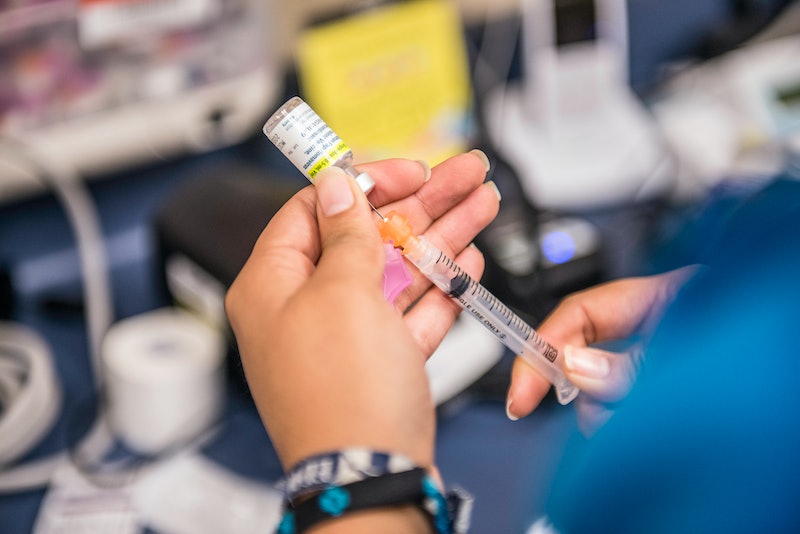 A report released by the American Cancer Society in January found that 2016 to 2017 saw the sharpest single-year decline in cancer deaths ever recorded. The World Health Organization believes eradication of cervical cancer, in particular, is “within reach,” but patients in remote areas with limited access to healthcare services still face greater risk of developing the disease than people in urban areas. That’s why Dr. Meghan Huchko, an OB/GYN and director of the Center for Global Reproductive Health at Duke, has been working in places like Kenya to make sure patients get tested and treated before cancer develops. She says the methods she’s learned could apply to remote U.S. communities, too.

In the communities she’s worked in, a lack of basic resources meant doctors conducted pelvic exams with headlamps and used basic tools like vinegar to test for abnormal cells. “When I first went to Kenya, I focused on developing a cervical cancer screening program because women who have HIV have an increased risk of cervical cancer,” Huchko says, “and they were not turning any attention to cervical cancer prevention.”

Over 10 years into Huchko’s work in Kenyan communities, the Kenyan government announced in October 2019 that it would add the human papillomavirus (HPV) vaccine, essential to preventing cervical cancer, to their routine immunization program. The development came after Huchko’s models for care in western Kenya proved effective; in regions where her teams worked, screening rates went from 5% to 70%.

“The bigger risks in underserved populations is lack of organized screening programs,” Huchko tells Bustle. “Almost all the disparities [in diagnosis] are due to lack of access to incredibly effective preventive care.”

Cervical cancer is very treatable when detected early; when caught, the survival rate is 92%, according to the American Cancer Society. Screenings like the Pap smear, which is recommended every three years for people with cervixes, are essential to prevention because they can flag abnormal cells before they become cancerous. However, HPV, the most common STI in the U.S., is often a precursor to cervical cancer. That’s why, according to the Centers for Disease Control, screening and the HPV vaccine could prevent up to 93% of cervical cancer cases entirely. “We know in the U.S. since the pap smear was introduced, the rates of invasive cancer dropped dramatically,” Huchko says, “and over half the cases we see in the U.S. now are due to lack of screening or lack of follow up for screening.”

In places like western Kenya, where Huchko and her team set up a health-care clinic, the risk of developing cervical cancer is much higher due to lack of resources and higher prevalence of HIV, which has also been linked to the cancer. Cervical cancer is also deadlier in Kenya than it is in places like the U.S.; it’s the second most common cancer among women in less developed areas, according to WHO.

Huchko says the lack of attention on screening and prevention in certain countries is caused by a host of factors, including lack of resources and awareness, but also fears related to stigma and privacy. That’s why her clinic started offering self-testing kits, which research has shown leads to increased screening rates. The kits, which include sample collection materials that can be sent off for testing, allow people with cervixes to test themselves with more autonomy and privacy. “Having a swab for testing that women can use on themselves has really allowed screening to impact a much wider population,” Huchko says.

Models like these could also be beneficial in rural parts of the U.S., which also face issues of limited healthcare access. While Healthcare.gov lists the HPV vaccine as one that should be free with most insurance plans, it also includes a caveat that coverage may vary by population and age. Those who aren’t insured at all might have to pay up to $250 per dose. In many states, parents can also decline the HPV vaccine for their children; some parents have concerns that being protected from this STI will lead to their kids having sex.

Huchko says that a community-oriented model like ones she’s used abroad could help increase the United States’ rate of screening and HPV vaccination. In Australia, she notes, an accessible and widely implemented HPV vaccination scheme for children of all genders helped lower cervical cancer rates dramatically. Australia is now set to be the first country to eliminate the disease. “Some of these more decentralized models could potentially bridge the screening gap for the under-screened populations that are at risk for developing cancer in the U.S.,” she says.

Huchko is hopeful that making sure fewer people around the world get the disease is doable. But it ultimately comes down to ensuring equitable access to healthcare — a challenge that depends largely on governments dedicating more resources to women’s health, which may be a long ways out.