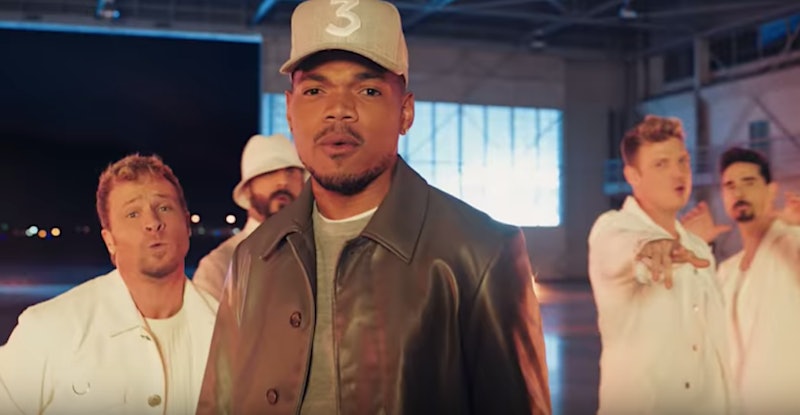 Backstreet's back, alright! Those in need of quenching their boy band thirst will definitely want to check out the new Doritos Super Bowl commercial, which features Chance the Rapper and the Backstreet Boys teaming up for a sizzling hot remix to one of the group's classic hit songs. The one-minute spot opens with Chance the Rapper sampling Doritos' new flamin' hot nacho flavor while the iconic single "I Want It That Way" plays on in the background. “They made the original, hot?” he inquires before taking a bite. That's when the two genres of music collide for an epic music video that'll make you want to dance around your living room for days on end.

You wouldn't normally think to pair Chance the Rapper and Backstreet Boys together, but it's a dynamic that works surprisingly well and now we all need them to collaborate on an album together as soon as possible. Not only does Chance the Rapper dance alongside the likes of AJ McLean, Howie Dorough, Nick Carter, Kevin Richardson, and Brian Littrell (mimicking their iconic boy band moves and all), but he also adds a new verse to the song as well, making it a truly must-see (and must-hear) event. Eat your heart out, N'SYNC!

Unfortunately, the full 60-second clip won't be shown in its entirety during the actual Super Bowl on Sunday, Feb. 3. Doritos will air a 30-second version of the ad during the game, according to AdWeek, so be sure to check out the complete video now or face missing out on some of the magic this commercial encapsulates. Whether you were a BSB fan back in the day or not, it's impossible not to appreciate this callback to the '90s music we all know and love.

Of course, this isn't the first time Doritos has delivered an entertaining Super Bowl ad. Last year the brand partnered with Mountain Dew to create a lip sync battle face-off between actors Morgan Freeman and Peter Dinklage with a little help from Missy Elliot and Busta Rhymes.

Needless to say, Doritos knows how to get the public's attention, and this year is clearly going to be no different. In addition to the ad itself, the brand will also have a Snapchat lens debuting on Super Bowl Sunday, which will allow users to "go full Backstreet, creating dynamic content of themselves in iconic '90s accessories inspired by the Backstreet Boys," according to a press release as reported by AdAge. Additionally, the Doritos "NowItsHot" campaign plans on including even more remix collaborations in the coming weeks, so this team up between Chance the Rapper and Backstreet Boys is only just the beginning.

As the week progresses, more and more Super Bowl ads will come out of the woodwork, and while some of them are sure to make a lasting impression, it seems safe to say that this Doritos creation is definitely one of the best ones yet. One could even go so far as saying that it's larger than life.

More like this
The Spice Girls Just Dropped A Brand New Music Video
By Sam Ramsden
Kate Bush Revealed The Real Meaning Behind 'Running Up That Hill' Lyrics
By Darshita Goyal
Everything To Know About Taylor Swift’s 10th Studio Album, 'Midnights'
By Grace Wehniainen and Jake Viswanath
Twitter Is Freaking Out Over Rihanna’s 2023 Super Bowl Halftime Show Announcement
By Stephanie Topacio Long
Get Even More From Bustle — Sign Up For The Newsletter