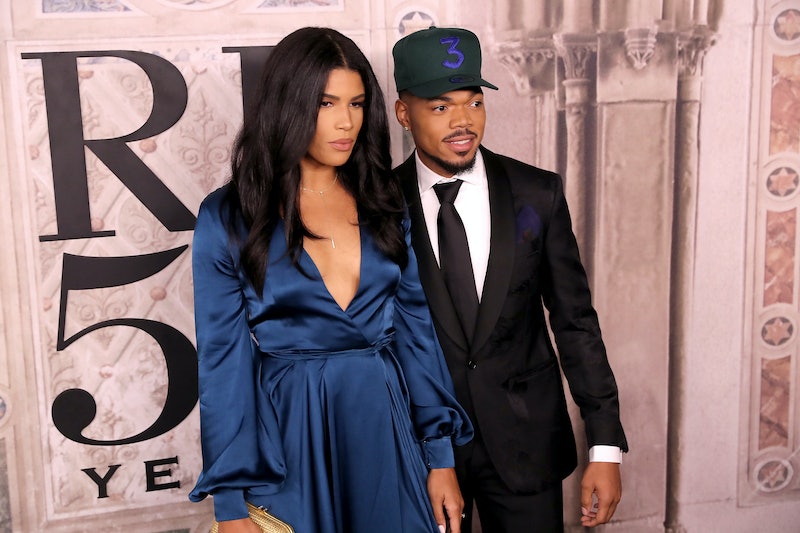 In an adorable thread he shared on Twitter, Chance the Rapper revealed how he met Corley. When he was 9 he attended his mother's office party where three other kids broke out in an unforgettable Destiny's Child performance. One of them would one day be his wife. "Now I'm locking eyes with the prettiest girl I ever seen in my almost-a-decade of life on earth," he wrote. He went on to say his dad, knowing Chance's performance ability, nudged him to join the dance. He said he couldn't. "Not just because it wasn't my party, not because it was their moment to dance, not even cause I was nervous about dancing in front of folks," he wrote. "Its cause I knew I was gonna marry that girl. And I ain't wanna jump the gun."

He went on to say that he would finally join the dance on their wedding night, which happened on Saturday, Mar. 9. According to an eyewitness report from E! News, the couple got married at Pelican Hill resort in Newport Beach, California in front of about 150 guests.

"The decor was all white, with big arrangements of white roses lining the aisle and scattered white petals where the bride walked down to meet her groom," E!'s source said. "The bride, Kirsten, wore a strapless white dress and Chance wore a white tux with a black bow tie. It was a romantic ceremony and a string quartet played as they entered. In the middle of the ceremony, their little daughter Kensli ran up and Chance picked her up and held her. It was very sweet and loving to watch."

Guests reportedly included Kim Kardashian, Kanye West, and Dave Chappelle, who "watched the ceremony intently and cheered for the bride and groom at the end of ceremony as they kissed passionately," per the source.

According to the Chicago Tribune, the couple actually married officially two months before their formal ceremony at the Cook County clerk's office in Chicago on December 27. The rapper proposed to Corley on July 4th last year at a family barbecue. Although the two split for a short period of time following their 3-year-old daughter Kensli's birth, their dedicated companionship could never be denied.

"From the beginning beginning to the end end. You are my oldest and best friend," Chance wrote on Instagram on Corley's birthday in May 2018. "You are responsible for everyone [sic] of the most wonderful things in my life. I'm forever grateful that God made me find you, and even more grateful that you made me find God. Forever and ever babe."

Congratulations to the happy couple, and the happy family.

More like this
Who Is Camila Cabello Dating? She's Getting Cozy With Lox Club CEO Austin Kevitch
By Radhika Menon
Who Is Bad Bunny Dating? Gabriela Berlingeri's Vocals Are Featured On His Song "En Casita"
By Radhika Menon
Demi Lovato's New Song "29" Hints At Their Age Gap From Ex-Boyfriend Wilmer Valderrama
By Jake Viswanath
Beyoncé & Jay-Z's Relationship Timeline Proves They're Still "Crazy In Love"
By Jake Viswanath
Get Even More From Bustle — Sign Up For The Newsletter