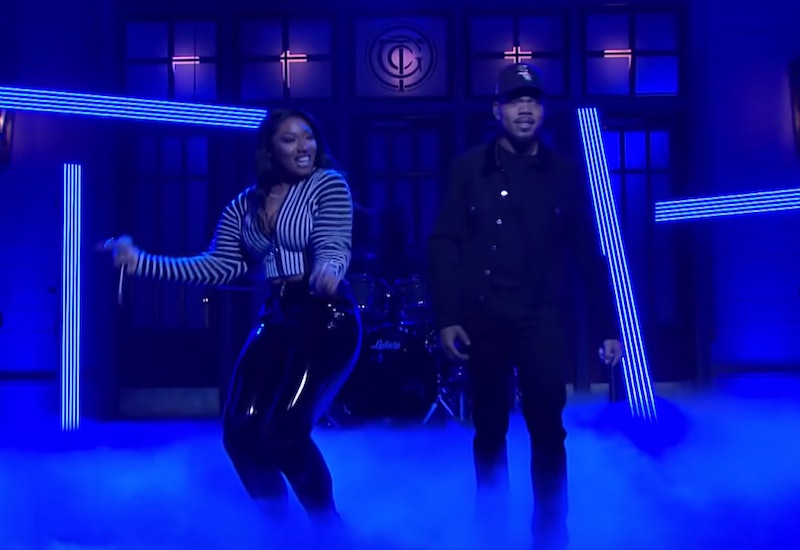 Chance the Rapper pulled Saturday Night Live double duty with a little help from his friends. Live from Studio 8H, Chance the Rapper’s SNL performance included a surprise cameo from Megan Thee Stallion. The rapper took the stage on Oct. 26 to perform a rendition of “Handsome” during his second set, a track from his recent album The Big Day that features vocal stylings from Megan. As such, the “Hot Girl Summer” rapper joined Chance on stage to bring her verses from the album to life.

In the performance, Megan and Chance perform their verses against the backdrop of flashing marquee boards that spell out the song’s lyrics. The second set, introduced by Game of Thrones alum Jason Momoa, who also made a surprise cameo in the episode, followed Chance’s first performance of “Zanies and Fools.”

While “Zanies and Fools” collaborators Darius Scott and Nicki Minaj were not on hand to join the rapper on stage, the performance opened with a home video of Chance’s daughter Kensli singing the Rodgers and Hammerstein track that served as a foundation for the song, “Impossible.” Remaining true to its Cinderella roots, the clip saw Kensli in an illustrated crown and horse-drawn carriage.

Saturday’s episode marked Chance’s second time hosting the NBC sketch comedy series. During his monologue, the Chicago-native wore a red Chicago Teachers Union sweatshirt and voiced support for their ongoing strike to reach an agreement in contract matters. “I just wish that when I was in school, my teachers had gone on a strike,” he joked before launching into a musical number praising Chicago and its “Second City” nickname.

Elsewhere in the episode, the rapper displayed his comedic chops. He reprised his role as e-sports reporter Lazlo Holmes, appeared as a judge to declare Momoa as “guilty” for stealing money as a live-in nurse, and served skeptical schoolmates some Tasty Toaster Tarts snacks. In line with his musician roots, the episode also took on musical numbers in the “Spooky Song” and “‘80s Drug PSA” segments.

Chance’s SNL double duty comes after the rapper announced in September that his 35-day North American tour would be pushed back to 2020 due to the birth of his second child, whom he welcomed in September with wife Kirsten Corley. “This year has been one of the greatest of my life; Marriage, new baby, first album etc,” he wrote on Instagram. “But with it being so eventful it has also been very strenuous having to divide my time and energy between family and work.”

He continued, “At this point as a husband and father of two I realize that I can’t make that mistake again. I need to be as helpful and available as possible to my wife in these early months of raising Kensli and Marli.”