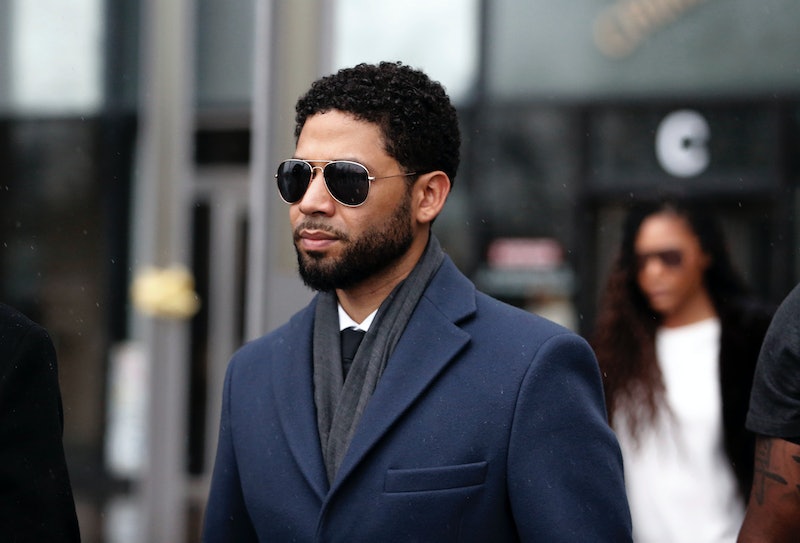 On Tuesday, the Cook County State’s Attorney’s Office dropped all charges against Jussie Smollett, according to the actor's lawyers. Smollett had been arrested on disorderly conduct charges for an allegedly staged attack that he said was a hate crime.

"Today, all criminal charges against Jussie Smollett were dropped and his record has been wiped clean of the filing of this tragic complaint against him," Smollett’s lawyers said in a statement to BuzzFeed News. "Jussie was attacked by two people he was unable to identify on January 29th."

In a statement provided to Bustle, the Cook County State's Attorney's Office called it an "appropriate resolution to the case." The statement said Smollett forfeited his bond — he had paid $10,000 (10 percent of the total $100,000) to be released in February — and noted his "volunteer service in the community."

"After reviewing all of the facts and circumstances of the case, including Mr. Smollett’s volunteer service in the community and agreement to forfeit his bond to the City of Chicago, we believe this outcome is a just disposition and appropriate resolution to this case," the statement from the Cook County State's Attorney's Office read.

According to CNN, Smollett was called into a Chicago courthouse on Tuesday morning for an emergency hearing. The Chicago Tribune reports that after the judge dropped the charges, records of the case were sealed "for unclear reasons" and the case was expunged from Smollett's record.

"He was a victim who was vilified and made to appear as a perpetrator as a result of false and inappropriate remarks made to the public, causing an inappropriate rush to judgment," attorneys Tina Glandian and Patricia Brown Holmes' statement continued.

At a Tuesday press conference, Holmes further criticized the Chicago Police Department (CPD) for how it handled the case — jumping ahead "to utilize the press to convict people before they are tried in a court of law," as she put it. Bustle has reached out to CPD for comment.

Smollett also spoke to the media after leaving the court house. "I want you to know that not for a moment was it in vane," Smollett told reporters. "I've been truthful and consistent on every single level since day one. I would not be my mother's son if I was capable of one drop of what I've been accused of." He added that he would not want to bring "the movement" or his family "through the fire like this."

The version presented by Smollett and his lawyer was challenged by at least one prosecutor who said Smollett was "absolutely not" to be considered a victim of a crime. Speaking with the Chicago Sun-Times, First Assistant State’s Attorney Joseph Magats said that the decision to drop the charges "should not be viewed as some kind of admission there was something wrong with the case, or something wrong with the investigation that the Chicago Police did."

20th Century Fox Television and Fox Entertainment, the studio that makes the TV show Empire that Smollett stars in, issued the following statement:

Jussie Smollett has always maintained his innocence and we are gratified on his behalf that all charges against him have been dismissed.

The producers of the show had removed Smollett from the final two episodes of the season. In his comments to reporters on Tuesday, Smollett said he wants to "get back to work and move on with [his] life."