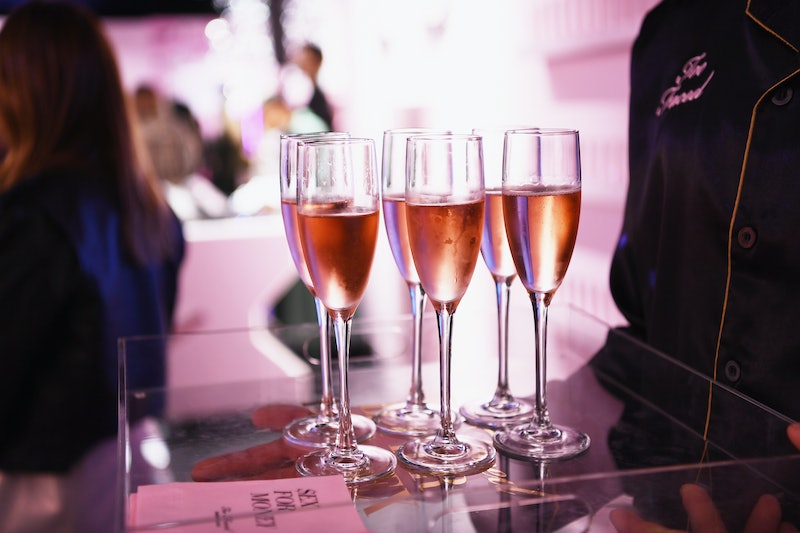 If you're on a budget, then affordable wine in definitely your jam. But, that could be a thing of the past because cheap wine is about to get more expensive thanks to erratic European weather patterns, according to Reuters. Sigh. What's more, a study from The Florida House found that 47 percent of millennial women spend $5 or less on a bottle of wine, because let's face it — a lot of us are broke AF. Well, goodbye to all that my lovelies. I'll give you a minute to console yourselves. OK, here's the quick and dirty about why you're going to have to shell out more cash for your favorite wine. Because of weather in Europe not being nurturing to vines, wine production is at its lowest point since 1957, which might be before your parents were born.

"The French government said last year production had hit a record low due to a series of poor weather conditions including spring frosts, drought and storms that affected most of the main growing regions including Bordeaux and Champagne," Reuters reported. Production has also slowed in South America. OK, now it's time to cue the tears. However, before you panic, growing conditions in the U.S., China, and Australia have been favorable, so you can still celebrate wine time on the cheap as long as you're OK with taking a break from your favorite European varietals. And, hey, if you don't believe climate change is real, this is all the evidence you need.

While wine consumption had decreased during the 2008 economic downturn, the International Organization of Vine and Wine noted in a press release that people are drinking wine again. The U.S. is the country drinking the most wine while France and Italy are the biggest wine exporters. Therein lies the problem. High demand and low production is a perfect storm from steady price increases. And, while wine producing regions have adapted growing practices to their environments, changes in those conditions can damage vines, which results in a reduced grape harvest.

This creates a chain reaction that eventually hits you where it hurts, in your wallet. "For all agricultural enterprises climate plays a dominant role in influencing whether a crop is suitable to a given region, largely controlling crop production and quality, and ultimately driving economic sustainability. In viticulture and wine production, climate is arguably the most critical aspect in ripening fruit to achieve optimum characteristics to produce a given wine style," the website GuildSomm explained. Changes in weather patterns also means that growing conditions are not ideal to produce the taste you're familiar with.

"For wine drinkers the most easily identifiable differences in wine styles come from climate: the general characteristics of wines from a cool climate versus those from a hot climate," GuildSomm noted. "Varieties that are best suited to a cool climate tend to produce wines that are more subtle, with lower alcohol, crisp acidity, a lighter body, and typically bright fruit flavors, while those from hot climates tend to be bigger, bolder wines with higher alcohol, soft acidity, a fuller body, and more dark or lush fruit flavor." And, while a lot of millennial women prefer to spend $5 or less on their favorite vino, The Florida Center's study found that the average bottle of wine costs more than that.

"There’s no denying drinking can be an expensive habit — particularly for those that are cash strapped. According to wine retailer Vivino, the cost of an average bottle of white wine averages $14.41, while an average bottle of red wine costs $15.66." Personally, I usually spend less than $10 unless I can get a bottle of Cabernet Franc, my fave, at Trader Joe's for under $7. And because this wine is French, I'm likely going to have to start paying more for it. So, what's the solution? If you want to keep drinking wine on the cheap, you're going to have to embrace U.S.-grown wines, which isn't necessarily a bad thing. Some of them are more than satisfying. Cheers!