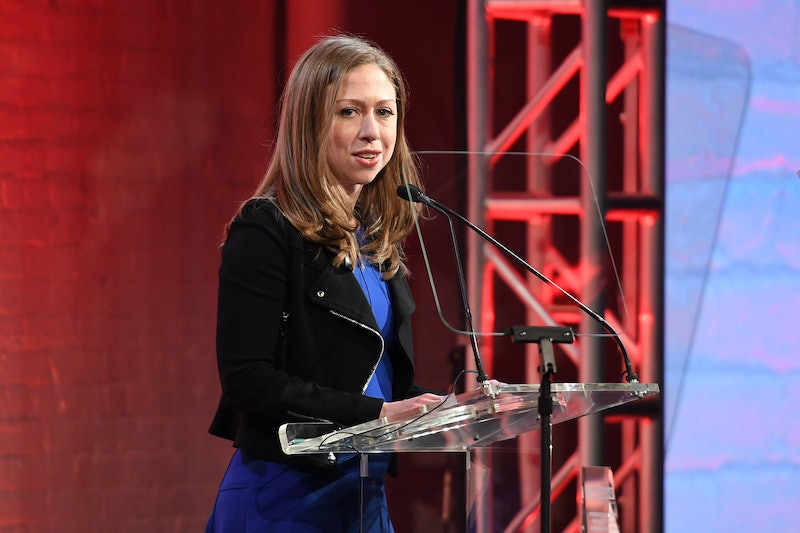 First thing Monday morning, Donald Trump voiced his fervent disagreement with some observers' opinions on Ivanka Trump sitting in on a G-20 summit meeting. Mid-tweetstorm, Trump dragged Chelsea Clinton into the mix, writing, "If Chelsea Clinton were asked to hold the seat for her mother, as her mother gave our country away, the Fake News would say CHELSEA FOR PRES!" Shortly after that, Chelsea Clinton responded to Trump's jab on Twitter.

Clinton retweeted Trump's tweet mentioning her and wrote, "Good morning, Mr. President. It would never have occurred to my mother or my father to ask me. Were you giving our country away? Hoping not." The response arrived after Trump also stated that it was "standard" procedure to ask for him to ask Ivanka to sit in his place if he had to leave temporarily. "When I left Conference Room for short meetings with Japan and other countries, I asked Ivanka to hold seat. Very standard. Angela [Merkel] agrees," Trump tweeted in the morning.

The entire incident concerning Ivanka sitting in Trump's place occurred at the meeting on "Partnership with Africa, Migration, and Health" at the G-20 summit. Trump had reportedly stepped away to meet the leader of Indonesia, Joko Widodo.

It is worth noting that temporarily leaving one's seat at such a convention is not entirely out of the normal. However, according to former NATO ambassador Nicholas Burns, the secretary of State should be the one to step in for the president in case he needs to step away for a moment, not an advisor.

Burns worked as a diplomat under Bill Clinton and George W. Bush. He told the Washington Post that Trump's incident can be seen as a breach of diplomatic protocol. According to Burns, conferences like the G-20 summit are critical events where it is necessary for the president to send a clear and concise message to the world about who is in charge.