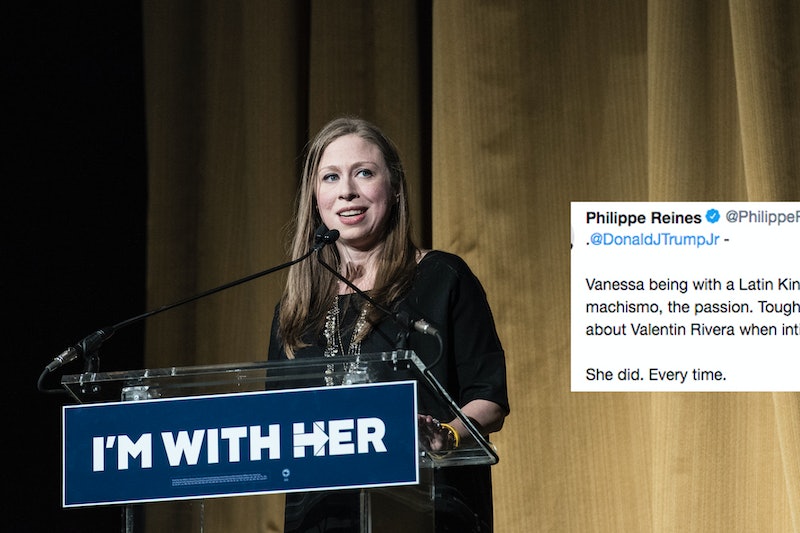 When it came to choosing between siding with her mother's former employee or defending her own values, Chelsea Clinton stuck to the latter on Wednesday. When Hillary Clinton's former press secretary posted a tweet about Vanessa Trump, Chelsea Clinton responded to condemn it.

The tweet in question came from Philippe Reines, who worked as a press secretary and senior adviser for Hillary Clinton's 2016 presidential bid. Reines tweeted a link to an article from Page Six entitled "Vanessa Trump's first love was member of violent street gang." Things then took what Clinton called a "vile" turn.

Reines addressed his tweet to Donald Trump Jr., who is currently in the middle of a divorce with Vanessa Trump. He wrote, "Vanessa being with a Latin King must’ve driven you insanely jealous. The machismo, the passion. Tough act to follow. Did you wonder if she fantasized about Valentin Rivera when intimate with you?" Reines answered the question. "She did. Every time."

Yikes. Robby Starbuck — owner of production company RSM Creative — tagged Chelsea Clinton in a tweet and asked her how she felt about "this tweet from Philippe?" Starbuck also noted Reines is a former spokesman for Chelsea Clinton herself.

Chelsea had two words: "It's vile."

Reines responded to criticism of the tweet hours later, writing:

With time to think: I regret the Tweet. But I wrote it, I own it. So leaving it. Friendlies: I’m sorry to disappoint. It’s a learning moment. Vanessa/Valentin: Wrong to include you. MAGATs: Take your vitriolic hypocrisy & shove it. Jr: You ain’t seen nothing yet

In wondering why a political consultant would publicly tweet something like this, Reines' Twitter bio may provide some explanation. It's a quote from Democratic strategist John Podesta: "Phillipe [sic] is the only person about whom you're torn between patting him on the back and trying to get him committed to Bellevue."

It's not the first time a former Hillary Clinton campaign official has made headlines for behavior towards women deemed sexist or inappropriate. In January, the New York Times reported that Clinton's 2008 faith adviser Burns Strider had been accused of sexually harassing a female staffer on multiple occasions. Clinton's then-campaign manager made the recommendation that Strider be fired, but the Democratic candidate decided otherwise. Instead, Clinton had his pay docked and required him to attend counseling. The female staffer who filed the complaints was switched to another job away from Strider.

It's also not the first time Chelsea Clinton has come to the defense of a person, regardless of the political alliances involved. In August, Clinton tweeted in support of Barron Trump, whose clothing choices had been critiqued in an op-ed at the conservative site The Daily Caller. She wrote, "It's high time the media and everyone leave Barron Trump alone & let him have the private childhood he deserves."

Clinton also called out the media on behalf of Malia Obama. After a video posted to Instagram in November of 2017 purported to show the former first daughter smoking, Clinton exhorted the media to leave her alone. "Malia Obama’s private life, as a young woman, a college student, a private citizen, should not be your clickbait. Be better," Clinton wrote.

As a former first child, Clinton is familiar with the ways innocent parties can become targets of political invective. When she was just 13 years old, conservative commentator Rush Limbaugh compared the young Clinton to a dog.

So it's not really surprising that Chelsea Clinton is willing to call out a former employee of her mom's campaign. In her view, Reines' "vile" tweet stepped over the line — and Clinton has not problem speaking her mind on such occasions.