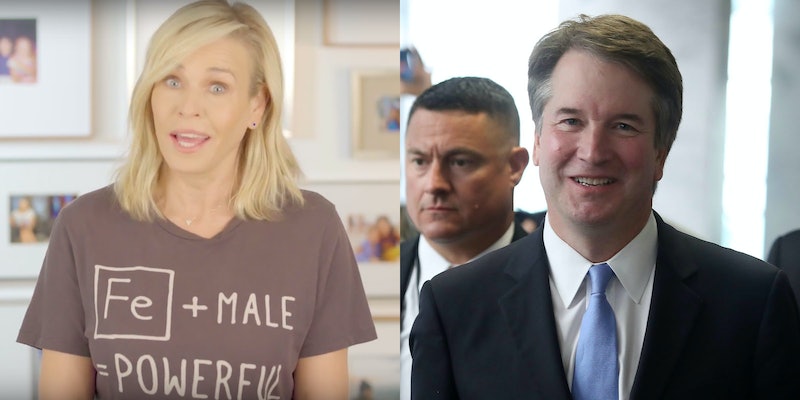 Comedian and activist Chelsea Handler wants to warn you about the threat to abortion access in the country. In a video with NARAL Pro-Choice America released on Monday, Aug. 20, Handler gets real about what could happen to Roe v. Wade if President Donald Trump's Supreme Court nominee Brett Kavanaugh is confirmed. In it, Handler discusses how Kavanaugh could vote to gut Roe v. Wade, thus leading to abortion being criminalized in many states.

"Roe v. Wade — which for the past 45 years has protected our right to make our own choices about our own bodies — it's in danger of becoming history," Handler says in the video. She argues that Kavanaugh's lifetime appointment to the highest court in the land could have serious consequences for women.

“Donald Trump repeatedly promised to only appoint Supreme Court Justices that will overturn Roe v. Wade, criminalize abortion and punish women. He has found his man in Brett Kavanaugh,” Handler said in a NARAL press release. “Let’s be crystal clear: abortion rights, and by proxy, women’s ability to be equal partners in society, is on the line in this fight. Brett Kavanaugh will turn back the clock on decades worth of progress for women.”

The video was released in the run-up to the “Unite for Justice” day of action on Aug. 26. There will be at least 92 events in 42 states, according to a NARAL press release. During the events, people from across the country will protest to demand that their senators vote against Kavanaugh’s confirmation.

“What could be more important than fighting for the rights of our daughters, mothers, and sisters not to be thrown in jail for making decisions about their own bodies and futures?” Handler said. “We need to do everything possible to defeat this nomination. We need to speak out. We need to call our senators. We need to take to the streets. Every single voice matters, and it’s a fight I know we can win."

If the Supreme Court does decide to either overturn or weaken Roe v. Wade, states would have the power to get tougher on abortion regulations. "Weakening" could mean, for instance, changing laws around when in a pregnancy women can have abortions and what the rules about informed consent are, without actually overturning the Roe ruling. According to NARAL, 26 states have anti-choice legislatures and governors that could take action to criminalize abortion if Roe v. Wade is overturned.

One of NARAL’s main concerns about abortion access has to do with trigger laws. In the video, Handler explains that trigger laws would automatically put a near-total criminal ban on abortion, going into effect immediately if Roe v. Wade is overturned. Four states already have these laws in place: Louisiana, Mississippi, North Dakota, and South Dakota. According to Mic, the laws in these states were passed between 2005 and 2007 and make performing or prescribing abortion a felony.

All of this may sound like a big “if,” but there’s reason to believe that confirming Kavanaugh would put Roe v. Wade in jeopardy. In past statements, rulings, speeches, Kavanaugh has signaled that he would personally vote to at least weaken the ruling, Vox reported.

But not everyone believes Roe v. Wade would be overturned just because Kavanaugh is added to the bench. Trevor Burrus, a research fellow at the Cato Institute's center for constitutional studies, tells Bustle he believes it's unlikely that a court including Kavanaugh would overturn Roe.

While the justices' votes certainly aren't about getting their approval ratings up, Burrus notes that the court generally won't vote against the tides of public opinion on social issues. Right now, the public doesn't necessarily want to overturn Roe v. Wade. A poll released this summer from NBC News and The Wall Street Journal found that 71 percent of American voters said they believed Roe v. Wade should not be overturned. Support for the 1973 court decision was at an all-time high, NBC News reported.

"I think it’s important to note that the court is very aware of what the people think, especially when it comes to social issues," Burrus says.

Burrus also notes that the Supreme Court generally doesn't like to overturn big precedents. However, he says that doesn't mean they won't make more narrow rulings about abortion.

"It is more likely that the court will adjust some of its abortion jurisprudence without overturning Roe," Burrus says. "Part of the problem is that Roe is a very broad and kind of a foundation, but everything we’ve been fighting over in Roe v. Wade is about waiting periods and informed consent laws and things like that. They’re not all answered by Roe... I think they might take more of those cases."

Even that could change the scene for women's rights. As things are, Handler points out in the video that safe and legal abortion has already been compromised for women in rural and low income communities — especially for many women of color. For example, in Mississippi and North and South Dakota — three of the four states with trigger laws in place — there is only one clinic where women can access abortion.

NARAL president Ilyse Hogue pointed out that now is the time to take action. “We are seeing unprecedented energy for this fight — NARAL members across the country have sprung into action, calling their senators, organizing their friends and neighbors, and planning for the largest progressive Supreme Court mobilization in recent history" Hogue said in a NARAL press release. "We are organized, we are engaged, and we intend to fight this like our lives and the lives of our children depend on it, because they do.”

In the video, Handler bluntly states that it's important to get involved and call your senator if you don't like the way things are being done, or could be done in the future.

"This is not a drill. Someday, a woman you love may need to end her pregnancy," Handler says in the video. "So, I know everybody's sick and tired of calling your senators, but you have to keep doing it. We have to work and fight for each other."