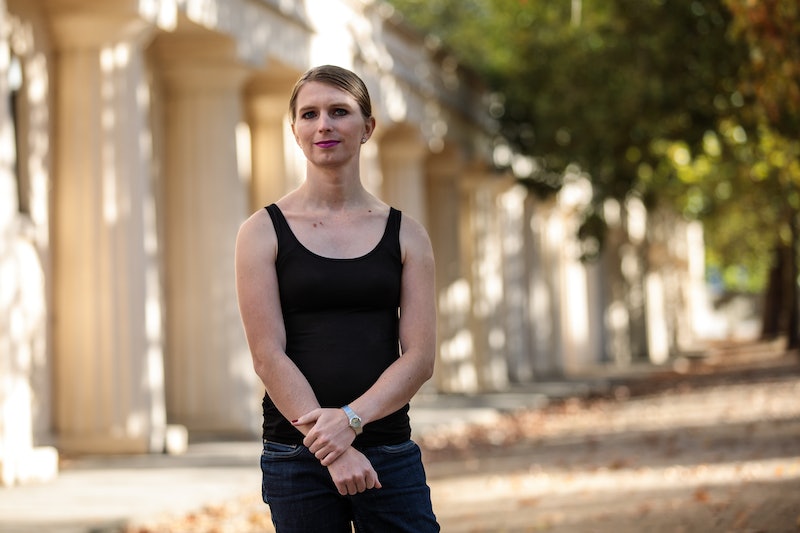 On Thursday, two months after a federal judge in Virginia found her to be in contempt of court and ordered she be detained for refusing to testify in a grand jury investigation pertaining to WikiLeaks, Chelsea Manning was released from jail. But according to her legal team, the expiration of the grand jury's term doesn't mean Manning's legal issues are over. The former Army intelligence analyst and whistleblower was served with another subpoena prior to her release. Manning, who has said she will never be convinced to cooperate with a grand jury, has been ordered to appear before a new grand jury next week.

"Today marked the expiration of the term of the grand jury, and so, after 62 days of confinement, Chelsea was released from the Alexandria Detention Center earlier today," Manning's legal team said in a statement released Thursday. "Unfortunately, even prior to her release, Chelsea was served with another subpoena ... It is therefore conceivable that she will once again be held in contempt of court, and be returned to the custody of the Alexandria Detention Center."

According to her legal team, Manning is expected to appear before a new grand jury on May 16, at which time she may be found in contempt of court and ordered back to jail. "Chelsea will continue to refuse to answer questions, and will use every available legal defense to prove to District Judge Trenga that she has just cause for her refusal to give testimony," her legal team said.

Manning, who leaked classified military documents to WikiLeaks in 2010, was found in contempt of court and subsequently detained on March 8 after she'd refused to answer questions about the organization or its founder, Julian Assange. According to the Associated Press, an investigation into WikiLeaks has been ongoing for quite some time.

Shortly after Assange was ejected from the Ecuadorian Embassy and arrested in London in April, the United States unsealed an indictment against him, charging him with conspiracy to hack into a Pentagon computer network, The New York Times has reported. According to the paper, the indictment alleged Assange not only published classified information Manning supplied but helped her hack into and download the documents. Assange has denied that charge, The Times reported.

Although she has reportedly been offered immunity for her testimony, Manning has repeatedly said that she would not cooperate with a grand jury subpoena. "After two months of confinement, and using every legal mechanism available so far, I can — without any hesitation — state that nothing will convince me to testify before this or any other grand jury for that matter," Manning said in a court declaration filed earlier this month as part of a motion for her release.

Manning went on to say her detention had only reaffirmed her refusal to testify. "This experience so far only proves my long held belief that grand juries are simply outdated tools used by the federal government to harass and disrupt political opponents and activists in fishing expeditions," she said in her declaration. "The way I am being treated proves what a corrupt and abusive tool this truly is."