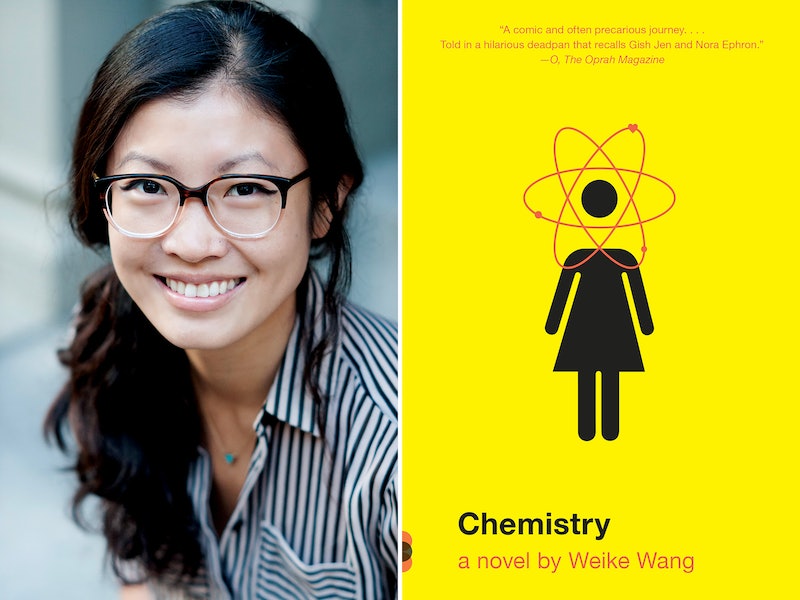 Debut author Weike Wang has a lot to celebrate — even if you don’t include her recent PEN/Hemingway Award win (which recognizes a distinguished first book of fiction and comes with a sizable $25,000 prize and two writer’s residencies.) That first book of fiction is Wang’s debut novel, Chemistry, a 2018 Whiting Award for Fiction winner, an NPR Best Book of 2017, and one that landed Wang a place on the National Book Foundation’s 5 Under 35 honoree list. It’s also slated for an Amazon adapted feature by playwright Ming Peiffer, and, if you haven’t had a chance to check it out yet, Chemistry is now out in paperback. That’s a lot for one debut novel.

But a worthy debut it is. Chemistry tells the story of a quirky, matter-of-fact, intensely overworked, list-making unnamed narrator who is facing intense pressure. It comes from her Chinese-American immigrant parents, from her boyfriend who is patiently waiting for a response to his marriage proposal, and from her doctoral adviser. Finally, she cracks, leaving her university, disappointing her parents, and sending her boyfriend (literally) packing. It’s a journey that, at least in terms of the narrator’s education, Wang herself has taken; she earned first a undergraduate degree in chemistry and then a doctorate in public health from Harvard University, before completing her MFA at Boston University.

“I don’t find that fields of science or social science talk much with humanities,” Wang says, of her own educational experiences. “In all the sciences, you are encouraged to tell a story with your work so writing helps there. But you are not encouraged to write ‘creatively’ as that would be akin to lying about your results. The reason I think the transition for me was hard, and is still hard, is that I often miss using the quantitative side of my brain. However, perhaps here is a similarity. When I write, I usually have no concrete idea where the story is going. I might have a loose outline but usually I just write it out, follow intuition. When I do research, I also don’t know where it is going. The latter sense of unknowing is the whole point. If you are doing good research, you shouldn’t know too much. If you did, that would mean you were doing something that has already been understood. If you are trying to understand something new, you would be unsure of yourself, but here is where intuition and a level head kick in.”

"When I write, I usually have no concrete idea where the story is going. I might have a loose outline but usually I just write it out, follow intuition."

Wang’s narrator spends much of her story in this place: unsure where her own story is going. She has torn herself away from a life of relative predictability and entered wholly uncharted terrain — becoming an after-school tutor for college undergrads and spending an obsessive amount of time at home with her equally-quirky dog. People magazine called Chemistry “the funniest novel ever written about living with depression,” and in many ways it is. Even though the narrator is clearly struggling to forge a new identity after her life veers off course, she never loses her wry humor.

“I liked what People magazine said! It actually made me laugh,” Wang says, when I ask if she’d intended to explore depression alongside her narrator’s contagious sense of humor. “But it wasn’t something I had thought about. I hadn’t consciously set out to write about a depressed narrator. It just naturally happened. I didn’t study brain chemistry, although in college, there was a cool neuroscience lab that had an amazing imaging technique called brainbow where individual neurons could be distinguished using fluorescence proteins — just Google ‘brainbow’; it is beautiful. So, I am not sure about the neurological connections between humor and depression but I imagine that those who have been depressed or are going through it, or who have had difficulties in the past, develop humor as a coping method.”

"But it wasn’t something I had thought about. I hadn’t consciously set out to write about a depressed narrator."

(For anyone wondering, I did Google “brainbow,” and found myself lost in image after image of Georges Seurat-style mouse hippocampi.) Interestingly, the images of these brainbows speak to the way Wang’s narrator often sees the world — despite her background in science, she often describes her life in a language of both chemicals and bursts of color, particles and shades of light.

But Chemistry isn’t all brainbows and humor. Much of Wang’s novel deals with Asian and immigrant stereotypes — and especially those stereotypes held against the female narrator and her mother. I ask Wang about this, and whether or not she encounters readers who assume Chemistry is a veiled memoir, rather than a novel.

“I don’t consider Chemistry a memoir,” Wang says. “Nothing in the book actually happened. I think when I write, I start with a skeleton or a shadow of something I have heard and then I just build, imagine, build. A lot of readers do assume it is a memoir and are disappointed when I say it’s not. But isn’t it more exciting that it’s not a memoir, as that would mean I have some imagination? Regarding the stereotypes, I encounter them every day. I think about them every day. Which is part of the burden — that I think about them every day, sometimes unwittingly.”

Chemistry also dives deep into parent/child, and specifically mother/daughter, relationships. The narrator’s mother has sacrificed immensely — her home, her language, her education, her career — in order to move to the United States with her husband; a decision that affords her daughter the opportunity to complete all the achievements she herself had to abandon in China. The two have a distant, at times tumultuous relationship. When Wang’s narrator beings attending therapy, as a result of her medical leave from her university, much of her conversations revolve around her mother, her mother’s past, and their subsequent mother/daughter relationship.

"I think when I write, I start with a skeleton or a shadow of something I have heard and then I just build, imagine, build."

“Our parents completely form us,” Wang says. “I don’t think any child is an independent product; even the absence of parents forms us. With immigrants and their children, the bond can be deeper. You feel so much debt to your parents. But then you feel that you should not feel this way as they chose to bring you here. But then you still felt the debt. Children of immigrants do not ask their parents to sacrifice as much as they do. The parents do it because they are parents and they want the child to surpass them. When you are an immigrant, there is such a drive to succeed because you arrive in this country on the bottom. I don’t always mean bottom financially. I mean socially, culturally. I came here when I was 12. I had no idea who Michael Jackson was. How would I? Who would have taught me? For years, I was relentlessly made fun of for how much I didn’t know. My parents couldn’t help me. So, I tried my best to catch up. But here is where I think I can pay homage to my parents’ good work — by writing and becoming a voice myself.”

The unique challenges faced by immigrant parents and children is a prominent theme in Chemistry as well. Even though the immigrant experience is different for Wang’s narrator than it is for her much-older, less-adaptable parents, they all still experience varying degrees of displacement — are at home nowhere. Even when Chemistry’s narrator returns to China with her parents, as a teen, she describes not fitting in there any longer either — critiqued by her cousin for seeming out-of-date.

“Another dynamic of the immigrant family is that when you uproot, there is not a large extended family to fall upon,” Wang explains. “The family shrinks. When the family shrinks, it is not just love governing a need to stay together, but reliance and preservation, as so much has already been endured.”

"When the family shrinks, it is not just love governing a need to stay together, but reliance and preservation, as so much has already been endured."

“This is a complicated question. I wonder who is doing the placing [of expectations, on women.] I sometimes think women set incredibly high, yet impossible, standards for themselves and each other. The line I wrote for the narrator is one of my personal beliefs. Who wouldn’t want to be smart and beautiful? However unattainable that is, who wouldn’t want to be both? When a women of color, or not of color, immigrant or non-immigrant, in science, not in science, scoffs at beauty and considers the pursuit of beauty to be vain, I have trouble believing. Of course, I know women who do, but do they really? Or is it also a coping mechanism from years of being told that if you are smart, then you must not be pretty? And if you are pretty, you need not be very smart. The standards for women and men are different. But instead of just focusing on these differences — and there are such differences — awareness of the expectations we place upon ourselves is also necessary.”

"Of course, I know women who do, but do they really? Or is it also a coping mechanism from years of being told that if you are smart, then you must not be pretty?"

Throughout much of Chemistry, Wang’s narrator is dealing with her feelings about her boyfriend and his repeated marriage proposals. Does she love him? How much love is enough love? Is there ever enough love to justify throwing your entire life or career or education away for another? Near the end of the novel, Wang writes, "Einstein wrote that love is the only energy in the universe that man has not learned to drive at will. He posited it to be the universal force that scientists have overlooked." In many ways, perhaps it’s that uncontrollable energy of love that has thrown Wang’s narrator for a loop: It can’t be distilled down to a science.

“I love that Einstein said that,” Wang says. “It seems so unscientific. I don’t think science can or should grasp love. Love is not a force in the sense that E/m or gravity is a force. Love is a feeling. Metaphorically, it is a force. Just not one that can be measured in newtons. In the novel, the narrator is dealing with love from so many sides. The love for Eric, her parents, the dog, her shrink, her best friend. She is learning how to see the gradients in feelings, however unquantifiable that is.”