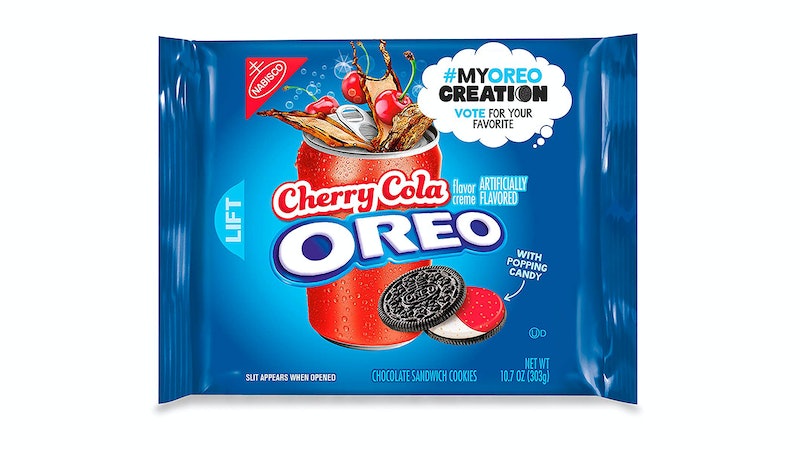 In this the 2018th year of our lord and savior Rihanna, anything is possible. At least when it comes to weird flavored Oreos. The latest blessing/abomination (depending on your taste) comes thanks to the winner of the #MyOreoCreation Contest: Cherry Cola Oreos. The flavor truly sounds like a period craving come true.

Earlier this year, Oreo launched its #MyOreoCreation contest. The contest, as its name implies, offered Oreo lovers the chance to compete in creating the next great Oreo cookie flavor. In April, the top three flavors were announced: Kettle Corn, Piña Colada Thins, and Cherry Cola. On April 30, the new Oreos hit stores nationwide, allowing us to pay actual human money to eat cookies that taste like popcorn and soda. What a time to be alive!

Today, in an exclusive announcement with Delish, Oreo declared Cherry Cola the winning flavor, as voted by fans as part of the campaign. In addition to bragging rights and the chance to see their original flavor on shelves, the winner of the #MyOreoCreation contest also receives a $500,000 grand prize. I’ll say that once more: the idea for Cherry Cola Oreos is worth half a million dollars. What! A time! To be! ALIVE!!!

Eden F. is to thank/blame for the prize winning Cherry Cola Oreos. Apparently, she was something on a soda-flavored cookie streak. As she told Delish, “I think my first entry was actually orange soda!” If I’m being honest, I wouldn’t say “no” to an orange soda, Creamsicle-esque Oreo. And if you would say “no” to that, cool fine more Oreos for me.

Newly minted half a millionaire Eden F. also told Delish the inspiration for the winning flavor taps into nostalgia. “I started to think about sweet sodas and popsicles and fresh fruit. All of those sweet juicy flavors like orange, grape, lime, and cherry,” she said. “I was trying to capture flavors that reminded me of happy summers when I was a kid in the late ‘70s and ‘80s.”

So, what exactly does soda-centric nostalgia taste like? The Cherry Cola Oreos feature the classic chocolate cookie. However, the cherry soda-esque quality comes from the red and white creme. In addition to being cherry cola-flavored, the creme is loaded with popping candy to mimic the fizziness of soda. So, to recap: it’s cookies AND soda AND Pop Rocks all in one Oreo. My six-year-old self is weeping sweet, sugary tears of joy.

After the #MyOreoCreation finalists hit shelves, there was some controversy around who actually created the Cherry Cola Oreo flavor. According to Grub Street, Lauren Young from Denver claims she submitted Cherry Cola Oreos months before the Oreos hit the shelves. Young reached out to the company but says she was told she wouldn’t be credited with the idea or, more importantly, the cash prize.

“As expected, many consumers submitted the same flavor suggestions, including ‘cherry cola,’ but did so in different and creative ways,” Oreo told PEOPLE. “Knowing that this would happen, the winning submission was based on more than just identifying the flavor (as this Denver Colorado entrant has done), but also on the creative way in which the entrant presented the flavor along with other details about the flavor creation, as outlined in the official rules.”

Hence why there is only one winner instead of dozens of Cherry Cola submissions splitting the $500,000.

If you want to try Cherry Cola Oreos for yourself, you’ll need to get to the store ASAP. Oreo tells Delish that the flavor is a limited-edition only for now. They say “only time will tell” if the new flavor becomes a part of its regular line-up. If you can’t make it to the grocery store, Amazon is selling Cherry Cola Oreos exclusively to Prime members for $2.98.

Be warned: the reviews are...mixed. Some love the flavor and the addition of the popping candies. However, others are less than impressed. One five-star (yes, as in the most stars) review reads: “Easily the worst tasting Oreo I’ve ever had. Everything about it is bleh. WITH THAT SAID, I love these because I can make people try them and watch them hold back the vomit. It's hilarious. 5 Stars.”

So, you’ll either love them or love hating them.