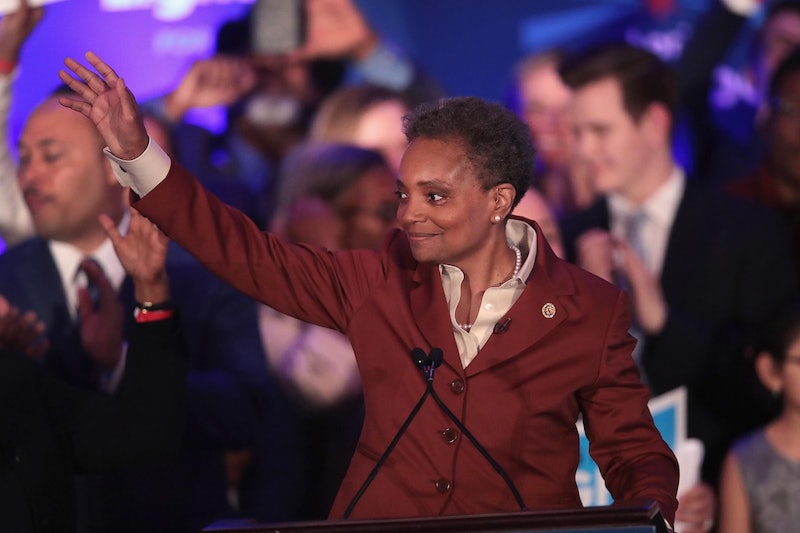 Chicago just elected its first black woman and LGBTQ mayor, two historic firsts. But what Mayor-elect Lori Lightfoot said about her historic win might surprise you. She focused on another aspect of the win completely when speaking with CNN on Wednesday, and said her "most historic" win was beating the Chicago establishment by a three to one margin on Election Day.

"This is something obviously that we've been talking about, the historic nature of the election, for some time," Lightfoot told CNN, "but I think the most historic thing was beating the old, entrenched Chicago machine and getting such a resounding mandate for change."

Lightfoot beat the current Cook County Board president and Cook County Democratic Party chairwoman, Toni Preckwinkle. She was elected to the county-wide position in 2010, 2014, and 2018, and was painted in the media as an establishment candidate.

In her interview with CNN and in her victory speech, Lightfoot still made clear that her victory would mean something to young people. She said it would have been "remarkable" when she was growing up to see a black lesbian running the country's third-largest city. "It would've been something that I talked about with my parents and my classmates, and I hope our children are watching," she said.

Lightfoot continued, "I want to make sure that I am the leader that respects the fact that kids all over the city and hopefully all over the country really understand that they can do anything that they want to do, that they set their minds to do, as long as they've got good, strong support from adults and love to support them."

In her victory speech, she said Chicago is a place where it doesn't matter "what color you are" and "where it doesn’t matter who you love, just as long as you love with all your heart."

There were some LGBTQ Chicagoans who opposed her candidacy and explained why on the website StopLightfoot.com. It essentially came down to two key issues: rent control, which Lightfoot opposes; and her views on the Chicago Police Department (CPD), which historically has a bad relationship with many in the city's LGBTQ community.

Those opposing Lightfoot's candidacy wrote that rent control was necessary to reduce homelessness among queer youth. But the much bigger issue seemed to be her views on police — particularly that she plans to keep Chicago Police Superintendent Eddie Johnson on the job, at least through the summer. An idea she floated to repurpose old, shuttered schools and turn them into police academies (instead of spending $95 million on a new academy) was also criticized.

In an ACLU candidate questionnaire before the election, Lightfoot was specifically asked about the relationship between the police and the LGBTQ community, and she had one of the most detailed answers of all the first round contenders. She said she would work to "protect [her] community and build trust and relationships with CPD."

Lightfoot plans to have three regional "LGBTQ+" liaisons who would work with the police department to "heal the deep scars that so many feel from years of oppression under the law." That would include tracking hate crimes and ensuring that detectives with sensitivity training investigate those crimes. If a cop were to commit a hate crime, a different city agency would investigate.

Most in the LGBTQ community, though, were excited to see Lightfoot win, and social media was filled with prominent LGBTQ politicians and activists congratulating her.

"This victory is historic, and It is also an undeniably proud moment for the LGBTQ community," Equality Illinois, the largest LGBTQ advocacy organization in the state, tweeted Tuesday night.