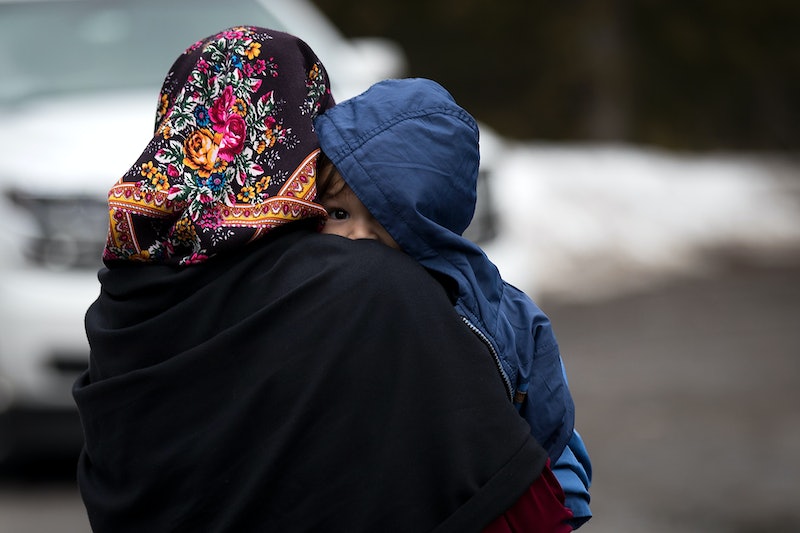 It's been established for a while that some mental health issues have genetic causes, but a new study has found that trauma may impact your genes — and this could impact future generations of your family. The effects of childhood trauma can be passed down to future generations, according to a new study published on Nov. 29 in the medical journal JAMA Psychiatry. The study was conducted by researchers at the National Institutes of Health (NIH), as well as researchers at the Uppsala University in Sweden, and Helsinki University in Finland.

The researchers studied the mental health of children whose parents were evacuated as children from Finland during World War II, and found the trauma the parents experienced as youth directly impacted their children — especially their daughters. They also studied the children of Finnish people who were not evacuated during World War II, but instead, remained in their homes. According to the study, female evacuees and their daughters were at a much greater risk of being hospitalized for psychiatric mood disorders when compared to Finnish women who were not evacuated and their children. In fact, daughters of the Finnish evacuees were over four times more likely to be hospitalized for mental health issues — whether or not their mothers were hospitalized themselves. Interestingly, the study found no increased risk for the sons of evacuees.

Between 1941 and 1945, thousands of children were sent to live in Sweden and neighboring countries to escape wartime hazards like bombings, malnutrition, and other potential danger. However, while the evacuees escaped those physical dangers, they faced even greater psychological trauma from having to leave their parents, learn a new language, and adapt to a new culture. While a 2013 study confirmed Finnish children who were evacuated actually faced greater hardships and psychological trauma than the kids who stayed, the NIH study shows that trauma could have consequences that span generations. “Many studies have shown that traumatic exposures during pregnancy can have negative effects on offspring,” said study author Stephen Gilman, ScD. “Here, we found evidence that a mother's childhood traumatic exposure — in this case separation from family members during war — may have long-lasting health consequences for her daughters.” The co-author of the NIH study, Dr. Torsten Santavirta, added, “Our observation of long-term psychiatric risk that reached into the next generation is concerning, and underscores the need to weigh benefits as well as potential risks when designing policies for child protection."

Though the researchers were unsure why the increased risk of mental illness was passed down from mother to daughter, the study cited two possibilities: First, the researchers believe the parenting style of the traumatized Finish evacuees could have negatively impacted their daughters. Additionally, the researchers also believe their findings could have been caused by epigenetics. Simply put, epigenetics is a branch of science that examines our genetic markers, and the way our surrounding environments, cultures, and lifestyle choices can affect psychological and physical development. Epigenetic inheritance specifically looks at the way our parents’ traumas can be passed down from generation to generation.

Epigenetics is still a fairly new field, but many scientists believe it may help determine the intergenerational effects that systemic racism and xenophobia have had on marginalized communities, especially in the United States. A 2013 study showed that health disparities among Black Americans — such as chronic stress, higher rates of infant mortality, and low birth weight — have persisted, in part, due to the negative impact of racial discrimination. Moreover, another study published in 2013 examined the way in which adverse childhood experiences (ACEs) altered the DNA sequence in Native Americans that help regulate stress, and led to higher risks of psychiatric issues in future generations. Notably, a study in 2016 found children of Holocaust survivors were more susceptible to mental health issues and chronic stress due to the same changes in DNA that Native Americans experienced.

While the researchers at NIH concluded more research needs to be done to support their findings, they hope their study will encourage others to discover ways to halt transgenerational mental health issues. It’s safe to assume your family’s history could play a direct role in your mental health, so now may not be a bad time to study up on your ancestry.

More like this
The Millennial “Queen Of Manifesting” On Turning Jealousy Into Inspiration
By Faith Xue
Ashley Benson Revealed The Whole-Body Effects Of Her Anxiety On TikTok
By Stephanie Topacio Long
Dyson Is Dropping Futuristic, Air-Purifying Headphones
By Rachel Lapidos
14 Easy Ways To Find Joy During The Holidays
By Carolyn Steber
Get Even More From Bustle — Sign Up For The Newsletter