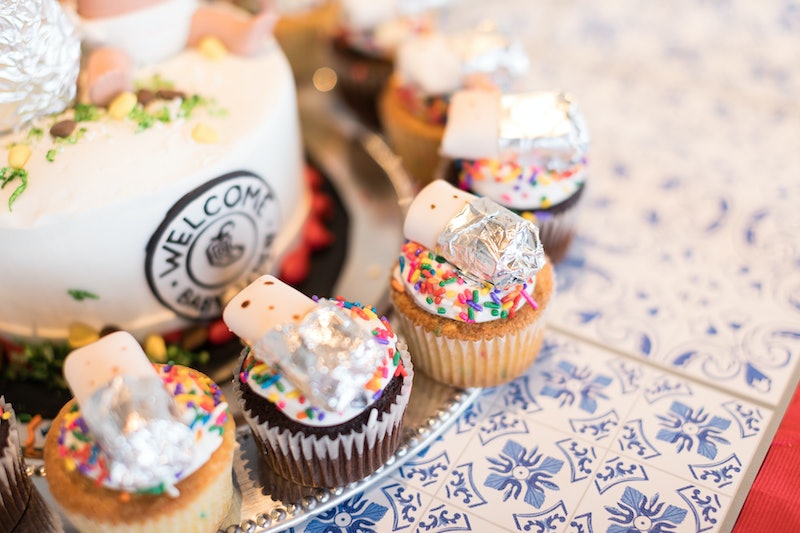 Cody Sowa, Courtesy of Chipotle
By Ayana Lage
May 9, 2018

Most soon-to-be parents have birth plans and an idea of how the labor and delivery process will happen, but things don't always go according to plan. Just ask the Colorado woman who gave birth in a Chipotle parking lot in April, Food & Wine reported. The story takes a twist when the fast casual chain responded by throwing her a baby shower — a really, really, really cute one.

It's all a lot to handle, but I'm slightly envious of the whole thing — especially the baby who is now destined to love Chipotle for the rest of his life. According to Denver station 9News, Adriana Alvarez realized she was going to give birth while en route to a hospital, so the couple called 911 and a dispatcher told them to pull into the nearest parking lot, which happened to be Chipotle. (The couple also met at a Chipotle and have worked at the store, according to 8 News NOW, so it's basically fate.) According to 9News, the dispatcher coached Alvarez's partner through delivery, and the 911 call includes the dispatcher helpfully saying, "Remember, the baby will be slippery, so don't drop it." The baby, named Jaden, was not dropped.

Alvarez gave birth to a healthy baby boy in the parking lot and continued to the hospital. A few days ago, the restaurant invited her back for a burrito-themed baby shower. Chipotle PR and communications manager Quinn Kelsey tells Bustle via email that the company is "always looking to make our customers happy by going above and beyond. We hope they enjoyed their Chipotle-themed baby shower as much as we enjoyed throwing it for them."

Kelsey tells Bustle that the restaurant came up with the idea after learning about the birth. "When we heard that baby Jaden was born in our parking lot, and the amazing teamwork between the family and the dispatcher, we were excited to do something special to celebrate them all," Kelsey says.

When I heard that Chipotle threw a baby shower for a family, I expected it to be over-the-top and completely extra, and I was not disappointed. The company has a history of incredible stunts, like the time it faked a Twitter hack to celebrate Chipotle's 20th anniversary, so the bar was set relatively high. After all, if you're going to have a baby shower at Chipotle, you have to make it worth everyone's time.

The restaurant gave Alvarez and her family a chance to meet the dispatcher who helped deliver the baby over the phone, and the entire party was Chipotle-themed. Not only did the restaurant cater the meal, but there was a cake topped with a decorative burrito and baby, along with cupcakes with burrito toppers. The baby was even wrapped in a tortilla blanket.

While Alvarez and her husband had probably planned to deliver their son at a hospital, I now have questions for myself. Am I tempted to deliver a hypothetical future child at a place that I love in hopes of getting an elaborate sponsorship? It's a possibility. Does giving birth in a car sound like an objectively awful experience? Definitely. I'm not envious of Alvarez's labor and delivery experience, but she made the most of it and now has a very cute baby as a result.

A Chipotle-themed baby shower actually sounds like a dream, but I don't think I'd actually have the fortitude to give birth in a parking lot and take it in stride. Regardless, I have an pretty easy idea for the baby's first meal once he's old enough to eat solid food — after all, the guac is still extra.