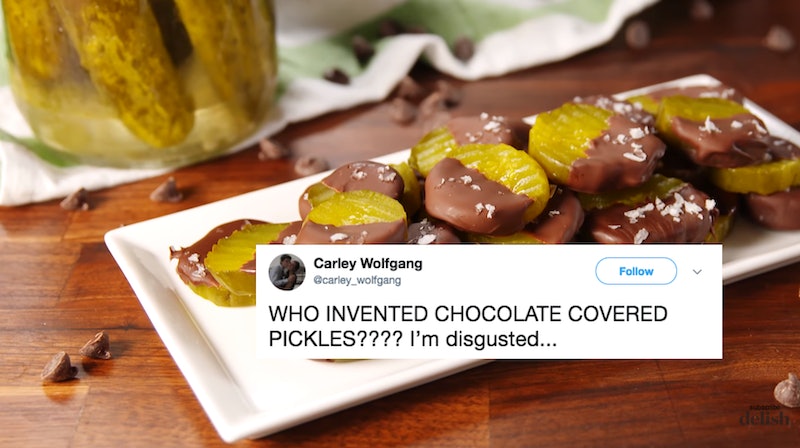 And today in Things I Just Learned About, But Kind Of Wish I Hadn’t, we have this: Chocolate-covered pickles are a thing that actually exist. To be fair, the idea of dunking a pickled cucumber in chocolate isn't new — not by a long shot — but due to the natural ebb and flow of the internet, it's trending again. (Whenever we tiny humans stumble upon something we simply can’t wrap our brains around, we have a tendency to want to yell about it to as many people as possible.) This time, the resurgence is due to a piece by Lena Abraham for Delish; originally published in July of 2017, it’s currently making the rounds again, and, well… people have thoughts about it.

Like many, Abraham was skeptical of the idea initially. “When I first heard about this bizarre combination of pickles and chocolate, I let out a totally involuntary grown,” she wrote in her piece, tantalizing titled, "You'll Never Guess What We Did To Pickles This Time..." “There is absolutely no way these two ingredients could go together! It sounded like a freaky Fear Factor-style dessert some demented state fair booth dreamt up in a nightmare.”

She did, however, start to come ‘round to the whole thing when she considered how well salt and chocolate go together (“I mean, what tops a good salted caramel chocolate?” she asked) — so she gave it a go and made some of her own. And apparently, Abraham’s version were actually something of a hit with her taste testers. “The good news: No one was totally disgusted by them,” she wrote. “In fact, most people liked them! The combination of salty and sweet did work, though some people were turned off by the pickle’s texture.”

And, I mean, that’s fair; mouthfeel is a major factor when it comes to how we taste, experience, and flat-out enjoy food. As James Hadfield put it at the Japan Times in 2017, “The tactile experience that food evokes helps tell our brains whether something is OK to eat, and also whether it conforms to our expectations (think of soggy potato chips). This somatosensory input combines with our senses of taste and smell to create an overall impression of the food.” Crunchy chocolate and soft pickles aren’t a combination with which many of us are familiar, so we don’t totally know what to expect when we’re faced with actually eating them; in fact, I imagine that negotiating the mouthfeel of a chocolate-covered pickle might actually be similar to negotiating that of a soggy potato chip.

However, although some folks out there in Internetland are about as on board with the idea of a pickle dipped in chocolate as Abraham and her friends were, others… aren’t. Chocolate-covered pickles, it turns out, are quite a divisive food item. They’ve made their way onto lists ranging from “15 Surprising Foods Dipped In Chocolate” to “11 Foods That Should Never Be Dipped In Chocolate” — and folks elsewhere in the online world are also happy to regale us all with their thoughts and feelings on them.

Rhett McLaughlin and Link Neal of the web series Good Mythical Morning made taste-testing chocolate-covered pickles the focus of the aftershow for their March 23, 2017 episode. Rhett was a fan, describing the combination “an immediate chocolate burst at the beginning that quickly goes away and is replaced by pickle”; the key, though, he noted, is the fact that the flavors are “complementary as they transition.” The duo’s social media manager, Jen Matichuk, was also a fan, despite some initial skepticism. Link, however, was… less convinced. Interestingly, the problem for him was the very thing Rhett liked so much: “The transition was a problem for me,” he said.

On Twitter, meanwhile, plenty of people are pro-chocolate-covered pickle:

Some are cautiously doubtful about them:

And many are outright disgusted by the idea:

For the curious, the “Malley’s” pickles referred to in some of those tweets were a limited-edition item that was available in the Cleveland area for St. Patrick’s Day this year; the result of a collaboration between Malley’s Chocolates and the Cleveland Pickle Co., these chocolate-covered pickles were available in boxes of four cocoa-coated spears for $9.99 on March 16 and 17 only, according to Cleveland.com. So, uh… sorry if you live in Cleveland, wanted them, and missed out them. There's always next year, I suppose.

But hey, the good news is that making chocolate-covered pickles yourself is pretty simple; according to Abraham’s recipe, all you need to do is toss some pickle chips in sugar, leave them to macerate for a few minutes, melt some chocolate chips and coconut oil together while your pickle-and-sugar mixture is doing its thing, dunk your pickle chips in the melted chocolate, and then let them harden for a bit. You can also use store-bought Magic Shell chocolate sauce instead of making your own if you want, according to a similar set of instructions on Instructables. Additionally, food blogger and recipe creator Molly Yeh of My Name Is Yeh, who has her own take on the sweet-and-salty snack, recommends freezing your pickle chips before you dip them in the chocolate (although admittedly, I’m not totally sure why — maybe they’re easier to dunk if they’re frozen? Who knows).

Me? I’ll be skipping this one, but if it sounds like it might be your jam, go forth. You do you. Chocolate-covered pickles and all.

More like this
I Tried The $20 TikTok Viral Oishii Strawberries — Here's What I Thought
By Sophie Hanson
On TikTok, A ‘Snackle Box’ Is The Best Way To Pack Charcuterie On-The-Go
By Meguire Hennes
The Best Memes & Tweets About The Discontinuation Of The Choco Taco
By Alexis Morillo
What Does POV Mean On TikTok? The Popular Acronym, Explained
By Emma Carey
Get Even More From Bustle — Sign Up For The Newsletter