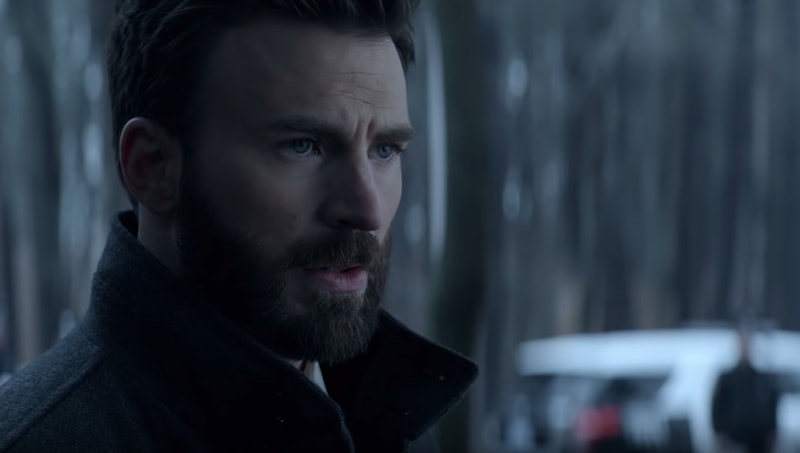 The world may seem like a lonely and scary place to be right now, but thanks to Chris Evans' new Defending Jacob trailer, we can take comfort in his extreme hot dad energy. Captain America may be a thing of the past, but Evans and his glorious beard are still here to save us all — only this time it's in the form of an Apple TV+ crime drama. A murder mystery and Chris Evans as a hot dad — what else could one want for entertainment in the middle of a pandemic?

Defending Jacob, based on William Landay's best-selling 2012 novel of the same name, stars Evans as dedicated father and dutiful lawyer, Andy Barber, who finds himself at a crossroads when his 14-year-old son, Jacob, is arrested for murdering one of his classmates. Convinced of their son's innocence, Andy and his wife, Laurie — played by Downton Abbey's Michelle Dockery — set out to clear their son.

But the closer they get to finding out the truth about what really happened, the more complicated things become. In fact, it could very well push Andy to his limits and force him to realize that he'll stop at nothing to protect his son — even if it means turning his back on the justice system he's sworn to uphold.

Along with Dockery and Evans, who is also an executive producer on the show, the eight-episode series features Cherry Jones, Pablo Schreiber, Betty Gabriel, and former CW stars Paul Wesley, Leighton Meester, and Kat Graham. And It star Jaeden Martell stars as Jacob.

On Wednesday, Evans took to Twitter to share the trailer, addressing the current coronavirus crisis. "I know it’s tough not leaving the house right now, so hopefully this helps a bit," he wrote. "A lot of wonderful people worked very hard on this project and I’m proud to be a part of it."

It's not easy to incorporate a heartfelt message while promoting a murder mystery, but if anyone could do it, it's Evans.

Defending Jacob is slated to premiere the first three episodes on Apple TV+ on Friday, April 24, with the following episodes premiering weekly on Fridays.

More like this
'The Queen’s Gambit' Season 2 Tweet Wasn’t From Anya Taylor-Joy
By Mary Kate McGrath, Jack Irvin and Grace Wehniainen
'Ted Lasso' Season 3 Might Be Its Last
By Zosha Millman and Grace Wehniainen
Netflix Shut Down 'Bridgerton' S3 Rumours About A “Very Dark” Storyline
By Bustle
Everything To Know About 'Only Murders In The Building' Season 3
By Gretchen Smail and Kadin Burnett
Get Even More From Bustle — Sign Up For The Newsletter
From hair trends to relationship advice, our daily newsletter has everything you need to sound like a person who’s on TikTok, even if you aren’t.