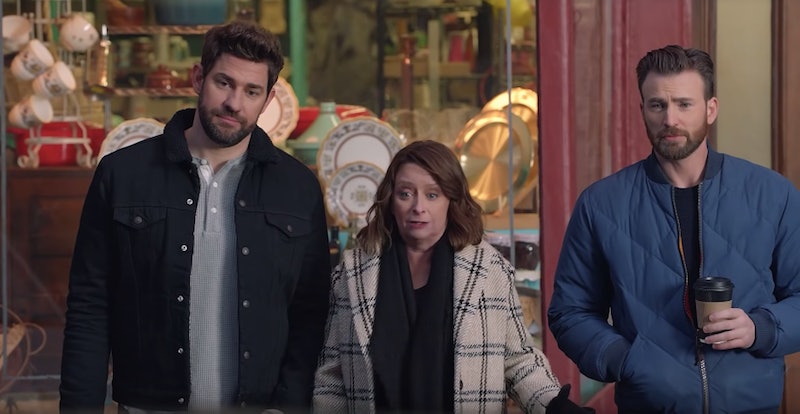 Have you ever wondered what would happen if Captain America and Jim Halpert ever crossed paths and developed very thick, over-the-top Boston accents? Now that question can finally be answered thanks to the release of Chris Evans and John Krasinski's new Super Bowl commercial, which features the two actors promoting Hyundai Sonata's Remote Smart Parking Assist. Or, as the Boston locals refer to it, “Smaht Pahk.”

Evans and Krasinski, who both hail from Boston, are accompanied in the commercial by fellow Massachusetts natives Rachel Dratch and David Ortiz — all of whom can't seem to get over how effectively Hyundai's Smaht Pahk seems to work. Evans initially has doubts that Krasinski will be able to fit his new Hyundai Sonata into such a tight parking space. But Krasinski pays no attention to Evans' "Smahty pants" remarks and proves them all wrong with the help of Hyundai's Smaht Pahk clicker. All he has to do is step out of the car and press the button, and the car automatically parks itself, allowing him to basically park anywhere. It is, as Ortiz notes, "wicked smaht." That Boston accent sure is contagious, isn't it?

Evans and Krasinski have always been beloved among the general public (this is Captain America and Jim Halpert we're talking about here, after all), yet the two of them have never starred in anything together before.

Though, funny enough, Krasinski did audition for the role of Steve Rodgers (also known as Captain America) prior to Captain America: The First Avenger's 2011 release. “My agent called and said, ‘They’re going to go with Chris Evans,’” Krasinski told Variety during an interview back in 2019. “And I remember I said, ‘Yeah, look at him. He’s Captain America.’”

Now, thanks to this commercial, though, the world can now fully see what a great team these two make. (Seriously, give these guys a buddy comedy ASAP or we riot.) But in the meantime, Marvel and Office fans can just relish this masterpiece for the true treasure that it is. The premise of the commercial may see a little ridiculous, but somehow these two manage to make it work in the best way possible. When it comes to Super Bowl car commercials, we can all agree it's not going to get much bettah than this.