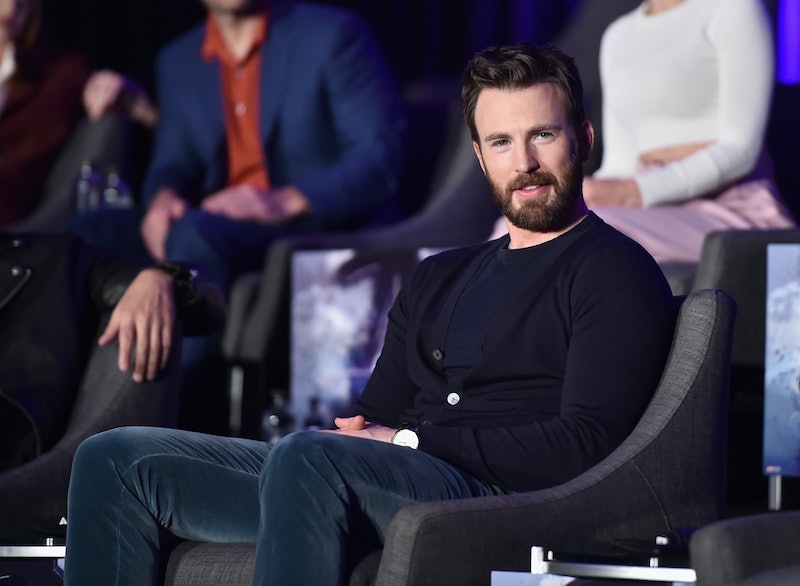 James Dean is making a return to the big screen in a brand new role — over 50 years after his death — and Captain America is not happy about it. After news broke that that Dean was posthumously cast in the upcoming action film Flying Jack, Chris Evans responded to James Dean's new movie on Twitter. And basically, he's saying what everyone is really thinking.

On Wednesday, Nov. 6, The Hollywood Reporter announced that Dean, the iconic film heartthrob who died in a car crash in 1955 at the young age of 24, would be brought back to life onscreen in Flying Jack, an upcoming action-drama that takes place during the Vietnam War. His character Rogan, who the outlet describes as a "secondary lead character", will be constructed with "full body" CGI using actual footage and photos of Dean — but another actor will voice the role.

Evans responded to the new developments by retweeting THR's announcement and making his feelings very clear. "I’m sure he’d be thrilled," he quipped, followed by an eyeroll emoji. He then took on a more serious tone, calling the news "awful," noting that an artist like Dean simply cannot be replicated with new technology. "Maybe we can get a computer to paint us a new Picasso. Or write a couple new John Lennon tunes," he said. "The complete lack of understanding here is shameful."

Unfortunately, it's possible that Evans' disapproval will be ignored. Directors Anton Ernst and Tati Golykh told THR that they searched "high and low" for the perfect actor to play Rogan, who "has some extreme complex character arcs." But despite "months of research," they chose Dean, claiming they have the blessing of his family. "We feel very honored that his family supports us and will take every precaution to ensure that his legacy as one of the most epic film stars to date is kept firmly intact," Ernst continued. "The family views this as his fourth movie, a movie he never got to make. We do not intend to let his fans down."

The use of holograms and digital technology to bring deceased celebrities back to life for fans' entertainment has, in the past, drawn major criticism. And it seems like this instance is no exception. Twitter users largely agreed with Evans, whether they know it or not.

Whether the rising backlash will make the filmmakers reconsider using Dean in the film remains to be seen. But right now, fans should plan to see Dean one more time on the big screen — or completely ignore that this is all even happening.

More like this
Alicia Silverstone Revives Her 'Clueless' Character In This Super Bowl Commercial
By Jake Viswanath
At 28, Rosie Perez Risked Her Career To Stop Playing Stereotypes
By Gabrielle Bondi
12 Years Ago, Austin Butler Manifested His Oscar Nom In This Disney Movie Scene
By Jake Viswanath
Sandra Bullock’s Razzies Speech Proves She’s The Ultimate Miss Congeniality
By Sam Ramsden
Get Even More From Bustle — Sign Up For The Newsletter
From hair trends to relationship advice, our daily newsletter has everything you need to sound like a person who’s on TikTok, even if you aren’t.