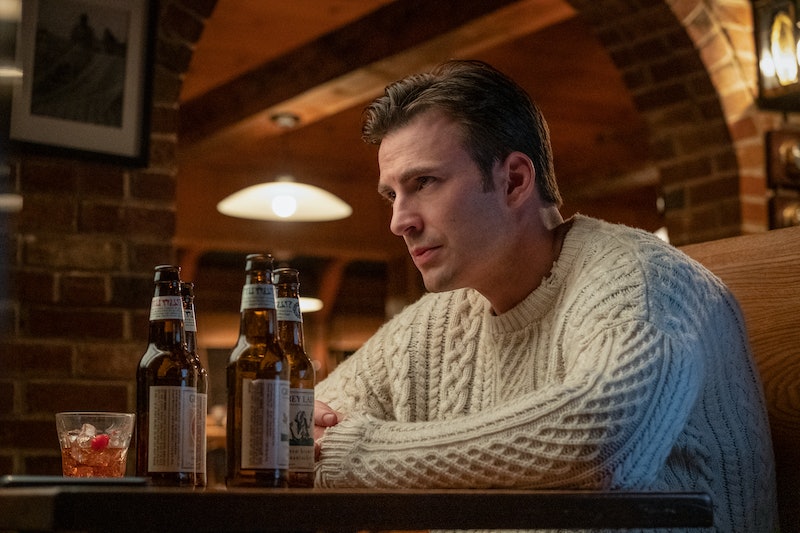 Knives Out, the Oscar-nominated "whodunnit?" thriller, may be getting a highly anticipated sequel, but don't expect to see many familiar faces on screen when it actually gets released. Chris Evans will not be in the Knives Out sequel, as confirmed by the film's writer-director Rian Johnson on Friday, Feb. 28. Sadly, this means that his chunky knit sweaters will not be around either.

Evans isn't the only Knives Out star who won't be seen again in the sequel. Johnson confirmed that none of the original cast will return, except for Daniel Craig, who is set to reprise his role as the annoying, but scarily on-point, detective Benoit Blanc. "Think of it just like another Hercule Poirot novel from Agatha Christie, so a whole new location, whole new cast,” Johnson explained.

Ironically, Craig almost didn't star in the first movie at all. Although the James Bond actor was Johnson's top choice, Craig only signed on after production for the latest Bond film, No Time to Die, was pushed back for logistical reasons. "It was a very serendipitous moment when the Bond movie pushed three months," he told THR. "He suddenly had a window open and we got in there right away and he said yes right away, and we were making the movie right away."

The sequel will focus on Craig's character Blanc as he investigates yet another new case. Details on the exact plot are slim — Johnson has just started writing — and no new casting announcements have been made, but whoever does star in the sequel will have large sweaters to fill.

More like this
Kukulkan From 'Wakanda Forever' Has A Surprising Connection To Marvel History
By Grace Wehniainen
Netflix Shut Down 'Bridgerton' S3 Rumours About A “Very Dark” Storyline
By Bustle
'The Queen’s Gambit' Season 2 Tweet Wasn’t From Anya Taylor-Joy
By Mary Kate McGrath, Jack Irvin and Grace Wehniainen
Rupert Grint Just Shared A *Major* Update About Ron Weasley’s Future
By El Hunt
Get Even More From Bustle — Sign Up For The Newsletter
From hair trends to relationship advice, our daily newsletter has everything you need to sound like a person who’s on TikTok, even if you aren’t.