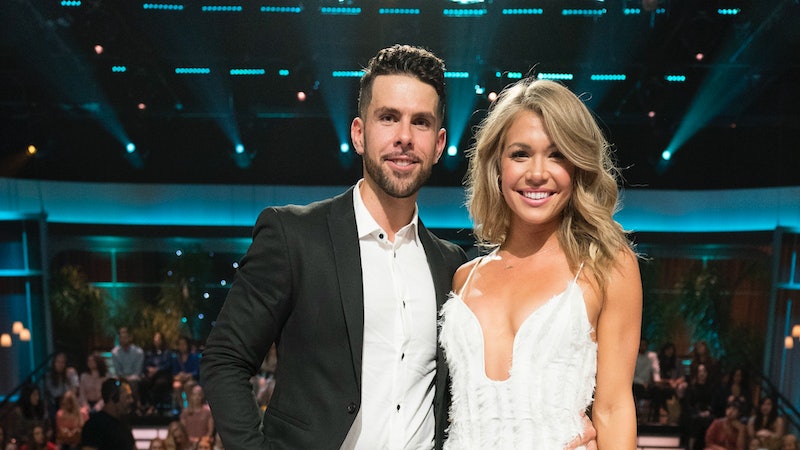 Watching The Bachelor franchise can lead to a lot of heartbreak for fans, but once in a while, these shows hand us a fairytale — and honestly, it's hard to imagine this couple with anyone else. It's official: Chris Randone and Krystal Nielson got married on Sunday, June 16, a year after meeting for the first time on Bachelor in Paradise last summer. And it sounds like their wedding couldn't have been more perfect — especially since host Chris Harrison was involved.

According to People, Chris and Krystal tied the knot at the Vidanta Hotel in Puerto Vallarta, surrounded by fellow Bachelor stars like Becca Kufrin, Ben Higgins, Ashley Iaconetti, and Jared Haibon. Best of all, Chris Harrison officiated the ceremony, which was filmed for the premiere of the upcoming season of BiP, which means fans will get to watch them say their vows when the show is back on August 5. People also shared a photo of Chris and Krystal on their wedding day, and of course, they both look awesome — and so happy.

So far, it sounds like these two couldn't be looking forward to be spending the rest of their lives together more. “We are so excited to start this new chapter of our lives together. We will have each other’s backs forever," Krystal told the outlet.

“I’ve always dreamed of being a husband and a father, and I have the perfect partner by my side.” Chris added.

Chris also told People that he knows they've moved fast, but he attributes BiP to helping them find out quickly that they were the right match. That's not surprising — love happens fast in the Bachelor bubble.

“It was fast, but in that environment, it’s equivalent to months of dating," he said. "We accomplished a lot more in a shorter amount of time.”

So far, Chris and Krystal have yet to share any more updates on their wedding on social media, but there's a good chance they'll keep it under wraps until the episode featuring the ceremony airs.

Chris and Krystal aren't the first BiP success story to get married on the show after meeting there on the beach in Mexico the season prior. Marcus Grodd and Lacy Faddoul got married on the Season 2 premiere, although they split a year later. In 2017, Carly Waddell and Evan Bass got married on the show, and their story has a much happier ending: today, they're still married and expecting their second child.

Last month, the couple celebrated their engagement with a party held in Escondido, California. They were joined by friends, family, and several Bach alums — including Ashley and Jared as well as Jade Roper and Tanner Tolbert.

"It means the world to us to have so much love and support as we prepare for our upcoming wedding," Krystal told Bustle at the time.

Congrats to the newlyweds! It will be fun to look back on their relationship together and see them walk down the aisle when BiP is back in August. Is anyone more suited for each other than these two?