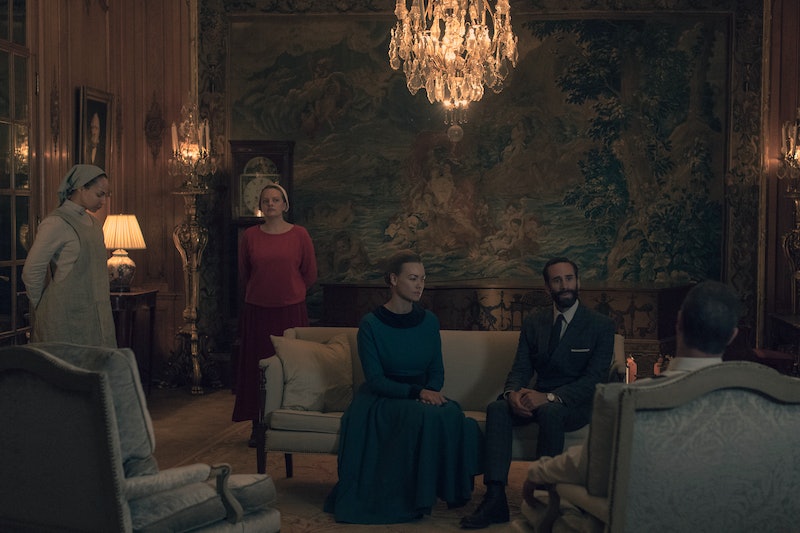 Everything about The Handmaid's Tale is mysterious and uncertain these days, including a few newcomers to Gilead. Law & Order fans will be excited to know that Chris Meloni is playing Commander Winslow on The Handmaid's Tale, Variety reports, who is a "powerful and magnetic commander who hosts the Waterfords on an important trip." There are a few different ways the situation with the SVU alum's character could shake out — new commanders in June's life have spelled disaster in the past, but she's also found strange alliances with them, too.

In a clip of the show published by CBS affiliate WTKR, Meloni's character is shown discussing strategy with Serena and Fred, telling them that they need to carefully curate the image they put out to the rest of the world in their mission to get Nichole back.

Even more worrisome, another clip from Good Day D.C. shows Winslow and Fred toasting to Fred's "bright future" in Washington. That suggested alliance with the Waterfords certainly doesn't bode well for June receiving any help from Winslow, but perhaps it's a facade — just look at Commander Lawrence.

Meloni confirmed to WTKR that Winslow is operating out of Washington, D.C., where the Waterfords and June are headed in the next episode to deal with the controversy surrounding Nichole, and that he's no one to be trifled with.

"He's kind of one of the main centers of power," Meloni said. "I think he wields his power effortlessly, with good cheer." And in comments to Good Day D.C., Meloni hinted even more at what his character's function might be. "He is a man of infinite appetites, and I think he is unafraid of expressing those appetites. I think he's a character that ... some of the main characters need to get through, go through, in order to get what they want."

Hmm.. the more that's revealed about Winslow, the more worried it seems like viewers should be for June.

Handmaid's Tale producer Warren Littlefield told Entertainment Tonight that Winslow opens up some interesting doors for the Waterfords, so that toast he shares with Fred definitely means something. "There’s a great trajectory for that character," he said. Does that mean the Waterfords will start to take more control on a national scale? Fred is already pretty high up in Gilead's government, but their efforts to get to Nichole might put them on a national spotlight like never before.

If June was still able to pull the strings behind the scenes in an alliance with Serena, a greater national platform for the Waterfords might have had its perks. But after last week's betrayal, in which Serena flip-flopped on her desire to have Nichole stay in Canada, it seems clear that June can't rely on her anymore.

It's easy to hope that this isn't what it looks like, and that Meloni's character will have some kind of hidden compassion for June and the other handmaids. We've seen before in Commander Lawrence that sometimes the people who helped build this terrible society have regrets, and want to redeem themselves by helping to destroy it. But we can't know anything about Winslow's true motives just yet, and honestly, it doesn't look good.

We'll just have to wait and see which way Winslow's moral compass swings. But he's shaping up to be a big player in June's story, for better or for worse.