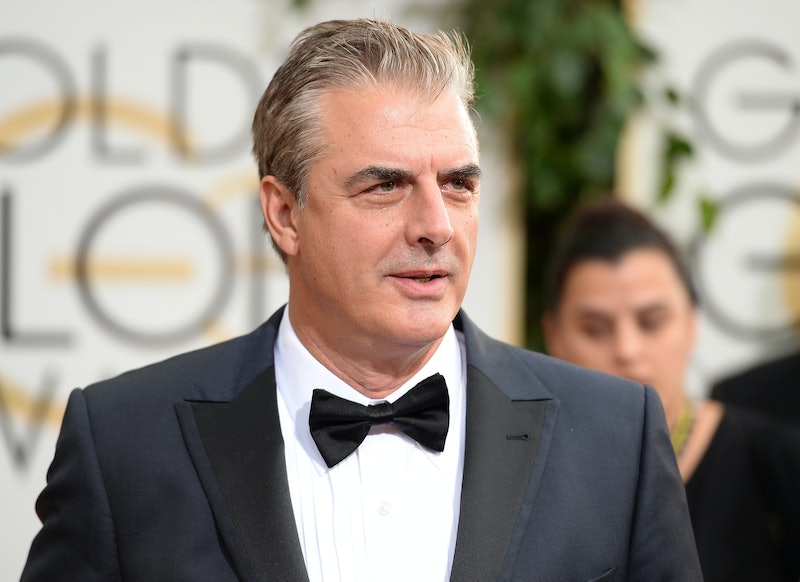 So, um, about that third Sex and the City movie. Yeah, it sounds like it's definitely not happening — like, for real this time. During a recent interview with UK tabloid The Sun (as per Page Six), Chris Noth, aka Mr. Big shut down any Sex and the City 3 possibilities with a few choice words, and responded to the rumors about his character, Mr. Big, getting killed off as well.

When asked by the outlet about the status of the franchise, Noth replied, "There’s no drama there’s no movie there’s nothing going on with it, it’s over it’s gone."

Not even a "maybe," or an "I don't know" with a wink and a smile or something? No? It's just straight-up over and gone? Damn. There goes fans' hopes and dreams. So, Sex and the City 3 is probably dead for good, according to Noth, but what about the arc his character would have had in a hypothetical third movie?

On the Nov. 19 episode of the Origins podcast, host James Andrew Miller revealed that Mr. Big was reportedly going to be killed off in the once-possible Sex and the City 3. Miller spoke with writers and actors from the franchise about the third film's script, and explained,

"They point to the fact that it calls for Mr. Big to die of a heart attack in the shower relatively early on in the film, making the remainder of the movie more about how Carrie recovers from Big's death than about the relationship between the four women."

Well, according to Noth, that's a bunch of nonsense. "[Mr. Big] wasn’t going to die," he told The Sun. "There’s no way he was dying that was all a lie."

Interesting. So, what would Mr. Big be up to then, you ask? "[He would be] smoking a good cigar and drinking my tequila," Noth told the publication, "which I suggest you all do." Alrighty then. Tequila it is.

Of course, this isn't the first time Sex and the City fans have heard of the third film's demise. Last fall, Sarah Jessica Parker (aka, Carrie Bradshaw, duh) spoke to Extra, and admitted that the franchise was pretty much gone for good. She said:

"It's over… we're not doing it. I'm disappointed. We had this beautiful, funny, heartbreaking, joyful, very relatable script and story. It's not just disappointing that we don't get to tell the story and have that experience, but more so for that audience that has been so vocal in wanting another movie."

The whole thing is truly a blow to fans. First they got our hopes up, then they pull the rug out from under us, then they drop all these reported plot twists for us to pine and mull over — at least one of which wasn't ever going to happen in the first place, according to Noth. The journey of Sex and the City 3 has been an emotional roller coaster not unlike Big and Carrie's relationship.

That said, if there is a silver lining, it's the fact that Noth said Mr. Big wasn't going to die. The thought of that happening was kind of too much to bear in the first place. It's much better that we can remember him the way he was meant to be remembered: living life, smoking cigars, and drinking Chris Noth's tequila.

More like this
All The Sneaky Lindsay Lohan Movie Easter Eggs In Her New Ad, Explained
By Stephanie Topacio Long
Anne Hathaway’s ‘The Devil Wears Prada’ Anniversary Post Turned Political
By Brad Witter
The 'Hocus Pocus' Sequel Finally Has A Release Date & It Makes Total Sense
By Shannon Barbour and Radhika Menon
Everything To Know About 'My Big Fat Greek Wedding 3'
By Grace Wehniainen
Get Even More From Bustle — Sign Up For The Newsletter