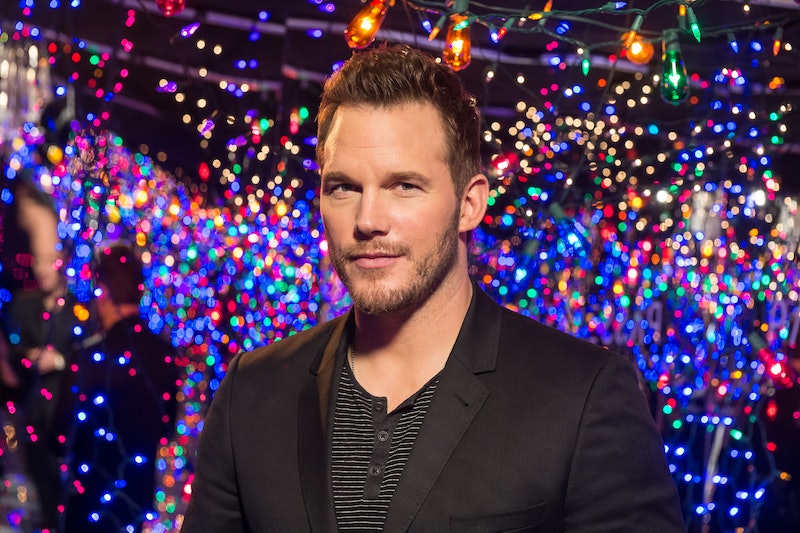 Never did I think I'd see the day where Star-Lord himself would be criticized for his body. You heard me. Chris Pratt is now slamming body shamers, because apparently people think he looks "skeletal." Who am I kidding? Of course this doesn't surprise me, because most celebrities experience some kind of negativity about their looks. Their physical appearance is under constant scrutiny and people can't help but send negative comments their way. Unfortunately, we live in a society that puts way too much focus on outward appearance, and that needs to change.

For those who follow the former Parks and Recreation star on Instagram, then you've most likely noticed that he's been sharing fun videos about the different snacks he's been eating while filming Jurassic World 2. He's even dubbed the segments, "What's My Snack?" To be clear, based on the snacks he's had, it does seem like Pratt is dieting. However, if he's receiving negative body comments, that's still not OK. (There are a ton of comments on his posts, many positive, but some noted that he looks "awful" or "tired.") What should've been taken as something fun and entertaining for his fans was turned, at least by some, into something negative. Why do people have to ruin goodness?

The Marvel actor took to Instagram Thursday and said he was reacting to someone who called him "skeletal." "So many people have said I look too thin in my recent episodes of #WHATSMYSNACK," he wrote. "Some have gone as far as to say I look 'skeletal.'" And here is where Pratt makes an important statement, "Well, just because I am a male doesn't mean I'm impervious to your whispers. Body shaming hurts." Preach.

It's easy for people to forget that body shaming doesn't happen to only women. Men face it too, and it's something that's come up before in Pratt's career. It's not OK to make anyone feel badly about their bodies. Just because Pratt is a huge action star, who is also known for his ripped abs after getting into shape for Guardians of the Galaxy, doesn't mean it hurts any less when someone insults him.

Pratt also decided to put a comedic spin on his response to body shamers. He shared an image of a T-Rex skull and said, "So to prove my security in the way I look I'm posting a current selfie of me at what I consider a very healthy weight. 500lbs. Zero percent body fat. Totally JK guys. This is a T Rex skull. Nailed you so bad. Omg." Boom. Mic drop.

When it comes to Pratt's body, I think some people forget that his weight has come into play throughout his career, which is unfortunate. So this isn't the first time he's dealt with body shaming. In fact, he almost lost out on the lead role in Guardians because of his body. Can you imagine anyone else as Star-Lord?

In December 2014, it was revealed to GQ that people thought he was too overweight for the role of Peter Quill. Director James Gunn admitted, "I thought it was an insane idea to cast the fat guy from Parks and Rec as the lead of our superhero movie. I didn't really even want to see him." Gunn also said, "I thought, 'Well, hell, he's overweight, but if that means we have the world's first overweight superhero, I'm OK with it.'" Pratt didn't see anything wrong with his weight and told GQ, "You can make a talking raccoon that looks real. Why can't I just be fat?"

Obviously, he got the part, mainly because Gunn was "blown away" by Pratt's acting abilities. What does that prove? That nobody should ever be judged by their appearance. Plus, who says a superhero has to look a certain way?

Please remember that words hurt. Pratt's message, even if he was joking in it, serves as an important reminder that men are body shamed, too, and it also affects them. Pratt's body doesn't define who he is or how talented of an actor he is. His weight has nothing to do with any of that. He is who he is and acts how he acts no matter if he's sporting a six-pack, gains weight, or loses it.

With that, let's all take a moment to appreciate this "What's My Snack?" video without judgment. You know, like how it should've been in the first place.