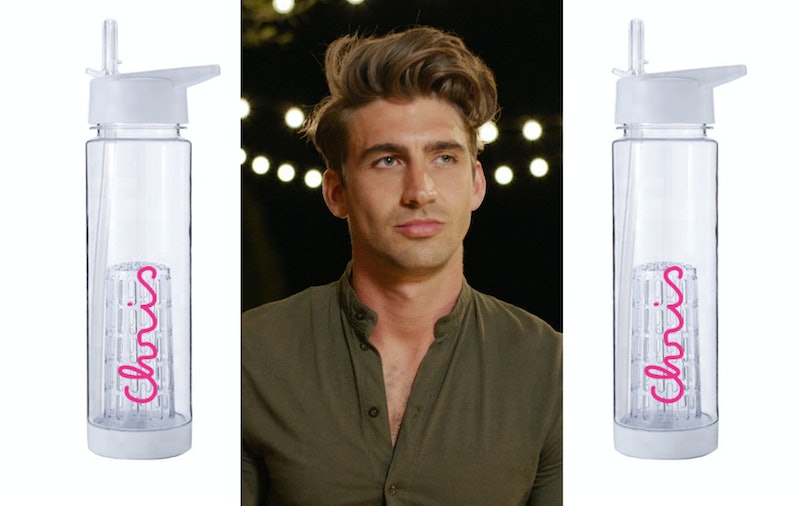 Yes, it really does feel like a thousand years since Love Island finished. Leaving fans with a lot more free time and the strange feeling of both utter despair and complete relief at it all being over. If you know, then you know. Anyhow, the obvious thing for former islanders to do is to fill up their cups post haste and take full advantage of the after-show glow. Good on them I say. And news that Love Island's Chris Taylor is selling his water bottle & other merch from the show is music to many fan's ears.

My first concern was "christ, how has he spent all his money so fast?" Well guys it turns out he is selling the swag for a good cause and not for his bank account. So what's it all for then? Prepare to go awwww because he is doing it all in aid of charity. And not just any charity, but the Dog's Trust. Which is basically double awwwww because, you know, dogs.

I guess you're wondering as well which sort of stuff he is selling? Old dirty socks? A handwritten joke book? Old pics of him and Harley?

Nope guys, he is flogging his OG Love Island merch. His personalised (and used) water bottle, suitcase, and wash bag, as well as an unwashed pair of swimming trunks. Um... I'll leave you to make your own judgements on that one. All of the above are signed and ready to go to the highest bidders. Which is pretty shocking when you hear how much people are actually prepared to put down for these items, which are all listed on eBay as we speak.

So the shorts are currently at £460, because some people are really into this kind of stuff. The suitcase, arguably the most useful of the lot, especially if you're called Chris, is at this moment going for £740. His wash bag, with only 17 hours to go (at time of writing) is at £510. Guys the most shocking of the lot is the water bottle. Which is finishing around the same time as the wash bag and is going for flipping £2,800. Wow the thirst is real. In more ways than one.

And guys, who knows, maybe some of these bidders are also making a bid for the reality star's heart while they're at it. Because in a super heartfelt Instagram post, Chris revealed that he and co-star Harley are no longer a thing. Describing the post as "serious for once", he explained that there were no hard feelings and that

"Both of us have been very busy with separate opportunities and haven’t had enough quality time for each other. We both have the upmost support and respect for one another and the decision was made amicably. I wish her all the best and will always be glad we rode the Love Island adventure together."

He followed with wishing her the best of luck in all of her endeavours.

Now let's hope he earns a whole heap of money for all those adorable dogs.