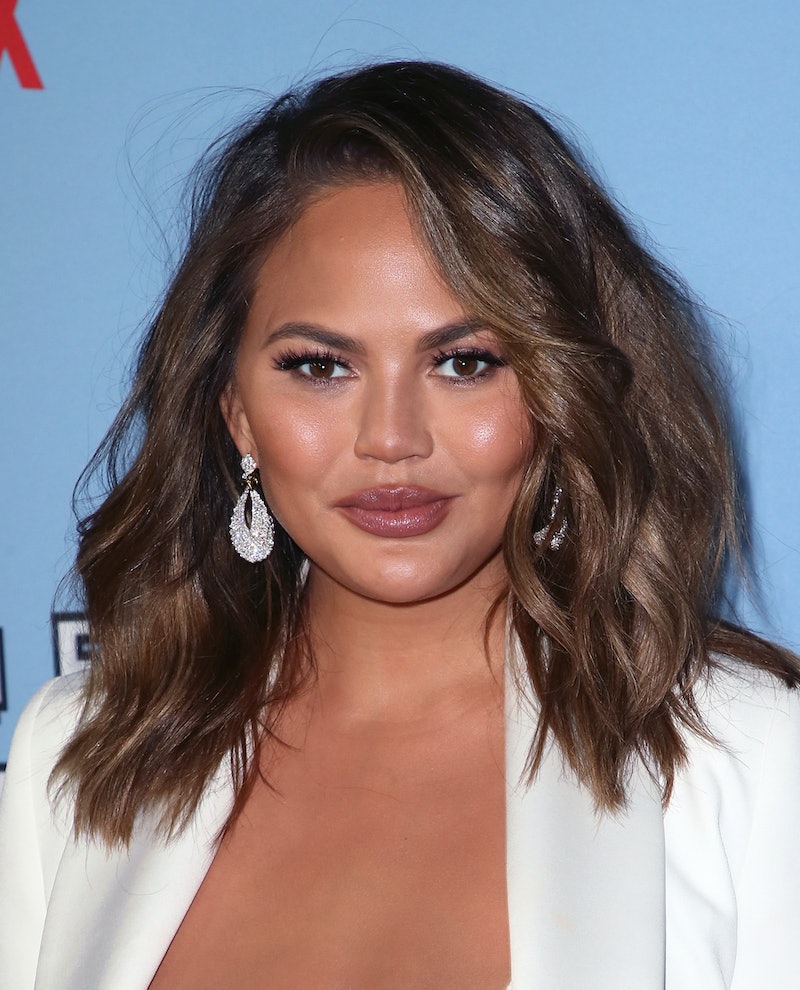 As fans of hers already know, Chrissy Teigen has a penchant for posting hilarious and relatable messages all over social media. Most recently, though, the Twitter star had a bit of a blunder. Teigen accidentally shared her email address with her 11.7 million followers, but without missing a beat, she managed to make the most of the silly situation.

This pretty major snafu happened while Teigen was live-tweeting her series Bring the Funny on Tuesday night. As Buzzfeed noted, the whole issue started when the cookbook author tweeted out a screenshot from the latest episode of the NBC series so that she could highlight host Amanda Seales' outfit. The only thing wrong with her post was that the photo actually featured her email in it, too, a fact which she was obviously not aware of at the time.

After quickly deleting the tweet, Teigen admitted her mistake by telling her followers, "F*ck I posted my email address lmao." But, the former swimsuit model decided to turn her lemons into lemonade by rolling with it. She wrote on Twitter that she received some kind messages and FaceTime requests, and that she actually engaged with a few of those lucky fans. Teigen described the situation by writing, "oh my god people are FaceTiming me. was 100% sure this would be a penis but nope just a nice stranger."

In one of those videos, the Bring the Funny judge and her mom, Vilailuck Teigen, got to exchange pleasantries with a fan named Ricardo. But, the convo didn't last too long, as Teigen explained that the family was about to have dinner.

In a subsequent video she posted on Twitter, Teigen could be seen in a clearly exasperated stance with her hands on her face and her computer right next to her. Unfortunately for her, the FaceTime calls continued to roll in, as Teigen posted yet another video that featured that classic ringtone. While it had to have been a stressful moment for her, you kind of can't blame the fans that wanted to follow in Ricardo's footsteps by having a chat with the charismatic star.

Luckily, Teigen got everything back under control eventually. She updated fans about a half hour after she originally let her email address slip that "everything disabled and changed emails. but I love you guys and thank you for the kind words lol."

According to Teigen herself, this whole email debacle paled in comparison to her other accidental, very personal reveal, she explained to one Twitter user that this was "not as bad as when I published my phone number on my dog's collar in my cookbook." In case you don't remember that debacle, in Teigen's 2016 Cravings, she featured a photo of her dog, Pippa, in the book. The only problem was that many readers noticed that Pippa's collar contained a phone number to call if she happened to get lost. Of course, Teigen subsequently changed her phone number, but not before receiving a "100 or so calls" and a flurry of "kind voicemails."

More recently, in July, Teigen committed another, technology-related blunder on Twitter. In order to promote Bring the Funny, the judge posted what she thought was a clip from the show. However, as she pointed out in a subsequent tweet, she accidentally shared the whole episode of the series (the Youtube video featuring the episode has since been deleted).

In true Teigen fashion, she took the mistake in stride as she joked to her followers, "Well it looks like I have been fired for posting the whole thing thank u all for your kind texts and DMs please send job opportunities to same number."

Thankfully, all of Teigen's devices (including any associated emails and phone numbers) are currently under control. But, of course, if you're still dying to share a message with the Twitter maven, no one can stop you from sending a tweet or two her way.

More like this
Chrissy Teigen & John Legend Reveal Their New Baby’s Name & Share First Photo
By Stephanie Topacio Long and Jake Viswanath
Twitter Is Having A Meltdown Over Buying Beyoncé Renaissance Tour Tickets
By Jake Viswanath
The Beyhive Is Mad At Harry Styles After Beyoncé’s Album Of The Year Snub
By Jake Viswanath
Beyoncé Has Officially Won The Most Grammys Ever & Twitter Is Losing It
By Jake Viswanath
Get Even More From Bustle — Sign Up For The Newsletter
From hair trends to relationship advice, our daily newsletter has everything you need to sound like a person who’s on TikTok, even if you aren’t.