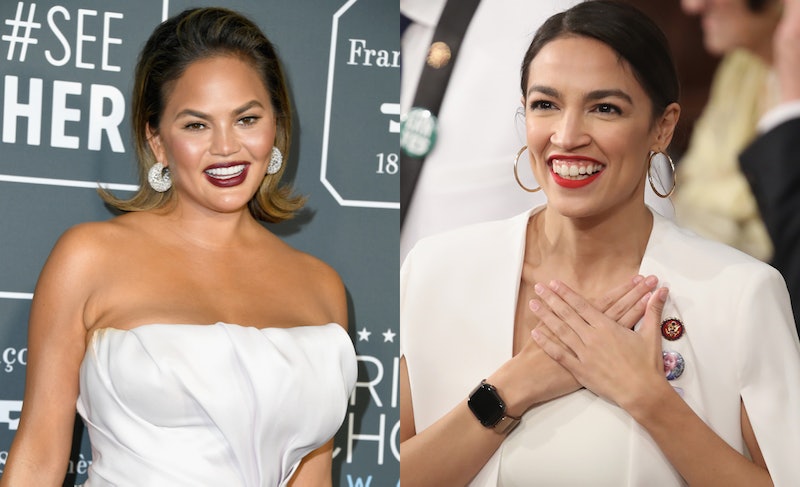 New York Rep. Alexandria Ocasio-Cortez and author and model Chrissy Teigen are both widely beloved on social media — and now, Twitter seems to have brought them together. In a Friday tweet, Teigen invited Ocasio-Cortez to watch the Grammys with her this weekend, and Ocasio-Cortez enthusiastically accepted.

"Hello my hero," Teigen tweeted at Ocasio-Cortez, "do you wanna come over and watch the grammys with us? there will be pizza."

Just a few hours later, Ocasio-Cortez responded to Teigen's invitation with an apparent attempt to poke fun at her own cooking abilities.

"Yes!" Ocasio-Cortez tweeted back. "we can live-tweet me burning something in the kitchen."

Teigen's husband, singer John Legend, will be at the Grammys this weekend, Business Insider reported, which means that Ocasio-Cortez and Teigen — and maybe even Modern Family's Jesse Tyler Ferguson — will be enjoying the show on their own. After seeing Teigen's initial invitation to Ocasio-Cortez, Ferguson chimed in, saying the New York lawmaker "can have my portion" of the pizza. Teigen urged Ferguson to "tell [Ocasio-Cortez] that we are normal!" noting that Ferguson would also be over to watch the Grammys.

Ocasio-Cortez's popularity has been steadily surging in the past year, ever since she first pulled off a major upset by defeating incumbent Rep. Joseph Crowley in New York's Democratic primary last summer. CNN reported that at 29 years old, Ocasio-Cortez is the youngest woman ever to have served in Congress.

Teigen didn't specify precisely why Ocasio-Cortez was her hero, but the freshman lawmaker seems to have inspired many people. For example, Ocasio-Cortez has been using social media ever since she won her midterm race to break down exactly what happens after someone is elected to Congress, in an attempt to make politics more accessible. And just this week, Ocasio-Cortez announced the rollout of an initiative she has championed to combat climate change; called the Green New Deal, this initiative proposes ways in which the United States can eliminate its carbon emissions while also revitalizing its economy.

A video of Ocasio-Cortez, in which she exposed some of the greatest flaws of existing campaign finance laws, also went viral this week — a video that Teigen retweeted shortly before issuing her invitation to Ocasio-Cortez. The video was filmed during a House Oversight Committee hearing on Wednesday, Business Insider reported.

The Twitter exchange between Teigen and Ocasio-Cortez prompted some delighted responses from their followers. One Twitter user responded to their tweets by saying, "This is the duo I didn’t know I needed!" Another expressed a desire to be "invited to this party of awesomeness," and even suggested that Legend could "craft a great jingle" for Ocasio-Cortez.

Teigen and Ocasio-Cortez also received a request to livestream their Grammys hangout for the benefit of their followers, and yet another user recommended that "this can be a pay per view event with the proceeds to charity."

People pointed out that while both women move in fairly different circles, they both are extremely influential on social media. Ocasio-Cortez — often referred to simply as "AOC" — has been breaking Twitter engagement records with her videos and tweets about politics, while Teigen is known for being candid on subjects ranging from postpartum depression to plastic surgery.