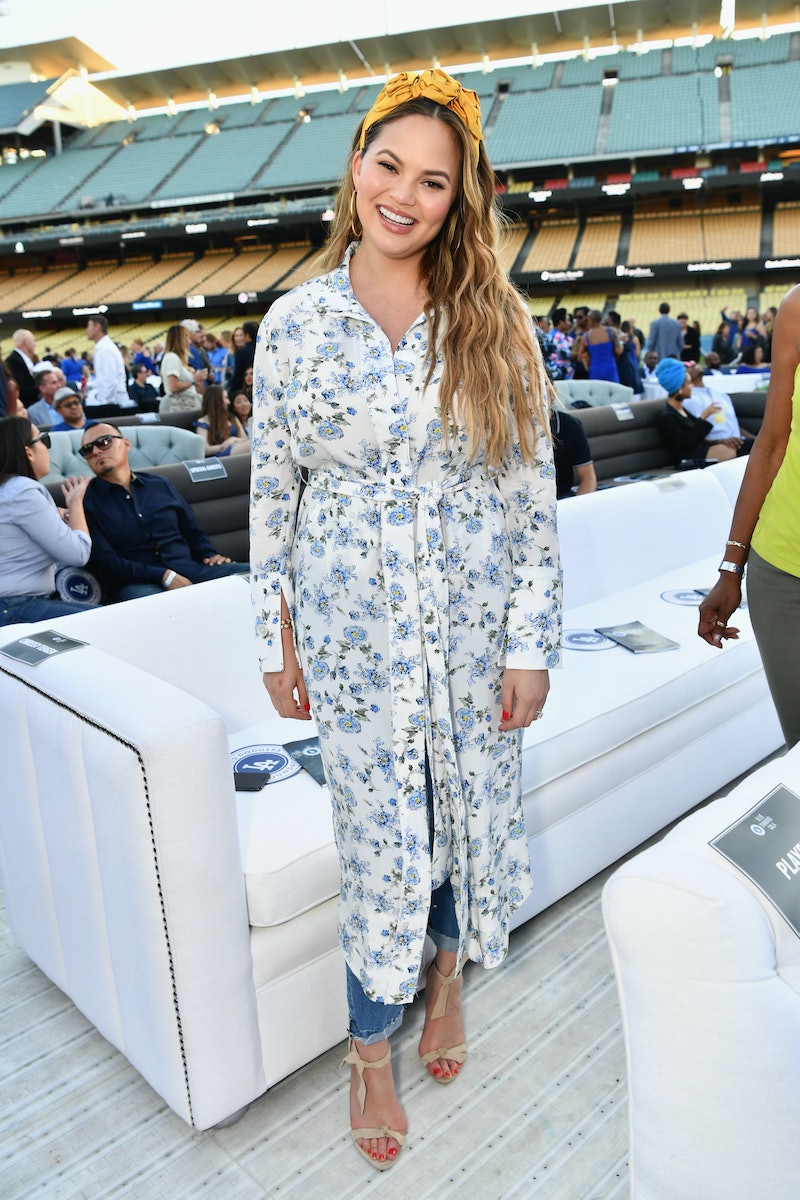 Seeing your child start school can be bittersweet for any parent, and Chrissy Teigen is no exception. Her and John Legend's daughter Luna just began preschool, and naturally the mom-of-two has a lot of feelings about it. In a recent phone conversation with Bustle, Teigen opens up about Luna's first week of school and what the milestone means to her. The cookbook author admits she cried about her daughter going to preschool, because Luna still "felt like such a baby" to her.

"I thought I would be fine," the 32-year-old recalls. "And it's actually much harder for me than it is her." Teigen compares the experience to when Luna was first vaccinated as a baby. She recalls telling her to "toughen up" before the shots — but when Luna started crying, Teigen did, too.

"I was like, 'It's gonna be fine, she's gonna go to school, it's not a big deal. It's just preschool,'" Teigen tells Bustle, while promoting her partnership with Pampers. "And then, just my day was basically just a 12-hour tear explosion of different emotions and different feelings."

Still, even though the experience brought up a ton of feelings, the model also has some amusing anecdotes. She admitted she hoped her daughter didn't "hit anybody" on her first day of school, and the comments turned out to be prescient. In an Instagram video Teigen shared later this week, Luna admitted to pushing a boy at school. Oops.

Teigen's honesty about Luna's school experience fits in with Pampers' #PureGoals campaign, which she's promoting on Instagram this week. In an Instagram Story video on Thursday, the Lip Sync Battle co-host explained she drives 45 minutes to Luna's school, even though there are other schools closer to their house, because she and Legend "want to do what's best" for their children. She then asked her fellow parents to share their own stories with the hashtag.

The cookbook author says that she loves spending time with her family, and that she and Legend have been able to apply their own interests to parenting. "He's doing a Christmas album now, so we're listening to Christmas singles in summertime," Teigen says of her Grammy-winning husband. "For him to be able to pick up Luna and dance with her to his music, and having her love that — you just kind of combine the things that you love."

Teigen also tells Bustle that she loves doing things with her family, because she considers herself "a kid at heart." She's using that love of wonder for good next month, too. She even shares that she's throwing a baby shower in September for one of her friends, and it will have a nostalgic "slumber party" theme.

As fans will recall, Teigen recently posted on Twitter that she's been purchasing vintage items on Etsy, and it sounds like a lot of those buys were for the epic upcoming party. Mystery solved.

"I bought all of these, like, Joey McIntyre posters," she says of her Etsy purchases. "I got a clear phone, all these different used sleeping bags. Lightly stained, apparently." Teigen explains that the baby shower will be inspired by teen sleepovers of yore — she even bought fake braces and retainers to really seal the deal. And because she's a cook, Teigen plans to make homemade Capri Sun pouches and pizza rolls to serve at the event.

It sounds like Teigen has maintained a sense of childlike wonder and optimism well into adulthood. But that doesn't mean she's not emotional about Luna growing up. She may have shed some tears over Luna's first days of school, but she and Legend are doing everything they can to make sure her experience is a good one.