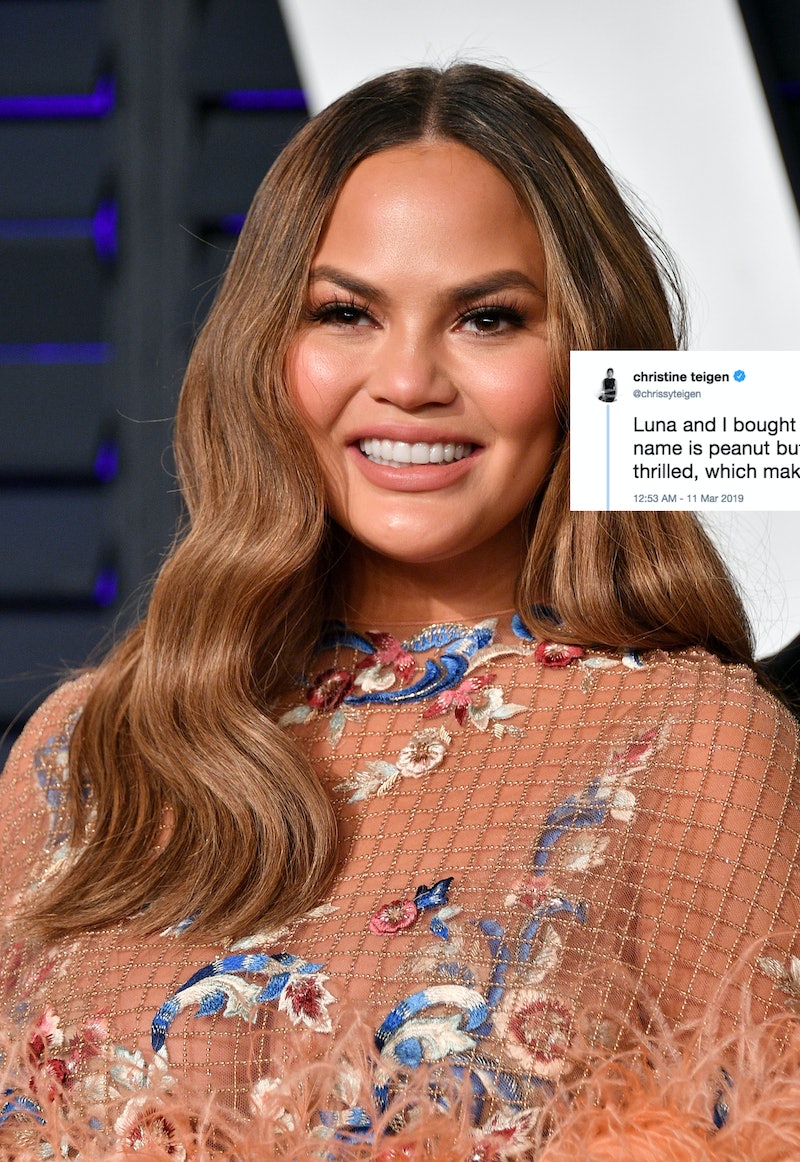 There's a learning curve for every new pet mom, right? On Sunday, Chrissy Teigen got her daughter Luna a pet hamster, and shared the whole saga on Twitter. The hamster won't be the first animal in the house, of course, since Teigen and John Legend love dogs. According to People, the couple has a French bulldog named Pippa as well as two other dogs, Penny and Pepper. However, this appears to be their first time adopting a hamster, and it turns out the care is a bit more difficult. Teigen documented the experience of buying the pet on social media, from the hilarious interactions with the pet store employees to setting up the hamster's new home.

On Twitter, Teigen first revealed the hamster's name, and that Legend wasn't too pleased by the new addition to the family. She wrote,

"Luna and I bought a hamster today. Her name is peanut butter. John is not thrilled, which makes me love her more."

The star went on to describe the somewhat confusing advice the family received from the pet store about hamster care. "They told us we can feed her anything. My mom said 'rice?' And they go 'no, not rice,'" Teigen wrote. "They also said 'don’t really touch her for a week. Then touch her a lot or she’ll bite you' it’s very confusing, being a hamster mom."

She went on to explain how little she knew about hamsters, telling fans that she tried to buy the pet a pal. This was also advised against by the professionals, and Teigen went on to solicit hamster advice from followers. She tweeted, "I said 'should I get two so they can have a friend?' And the lady said no, one will end up with a lot of bully scars. So any hamster tips are welcome."

At this point, fans demanded a photo of the hamster, but Teigen was having trouble finding her. "I just went to take a picture of her and I honestly can’t find her," she wrote.

It turns out Peanut Butter was too busy burrowing to be photographed, but the Lip Sync Battle host promised the hamster was adorable. Teigen replied to one fan, "she won't come out from her paper dust crap stuff but she is super cute."

Thankfully, fans didn't have to wait too much longer to catch a glimpse of Luna's pet. After finding the new hamster, Teigen posted a video of the pet chewing on the side of the cage. She captioned the post, "is this normal."

In the replies, several people tweeted that the hamster might need more space and biting was a sign of stress. The cookbook author went on to assure followers that the hamster had plenty of room to roam:

"Please don’t feel bad for her. We got her everything and more and a giant space to roam in. If I had a safe enclosure for a hamster farm, i would have that."

Then on Monday morning, Teigen updated fans on the hamster, revealing that it had already got free. She wrote, "welp the hamster got out. just what you all told me would happen." Hamster escapes can happen to even the most responsible pet owners, and Peanut Butter will likely make it home alright.

As of right now, there haven't been any more updates yet, but fans can likely look forward to more hilarious tweets as Luna and Teigen learn more about hamster care.

More like this
Chrissy Teigen Is Pregnant After Resuming IVF Following Her 2020 Pregnancy Loss
By Grace Wehniainen
Kathy Hilton Tried To Explain Why She Misidentified Lizzo As Precious On Live TV
By Jake Viswanath
Sophie Turner & Joe Jonas’ Fave Taylor Swift Album Is Full Of “Bangers”
By Sam Ramsden
The Sean Bean Intimacy Coordinator Controversy, Explained
By Sam Ramsden
Get Even More From Bustle — Sign Up For The Newsletter