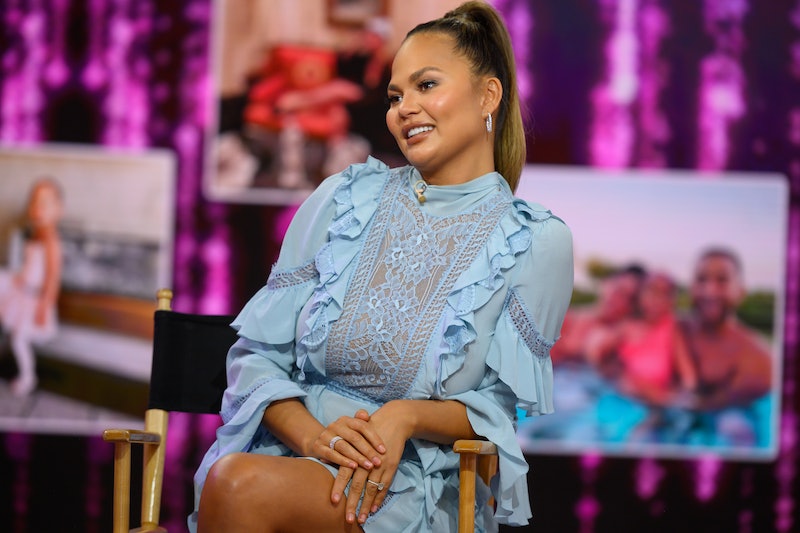 You can't keep a strong woman down, which is why it should come as no surprise that Chrissy Teigen clapped back at a body shamer who compared her figure to SpongeBob after she shared a video of herself in a one-piece swimsuit. "I never post thirst traps, so here I am trapping you in thirst... with thirst," she teased in the clip while standing in a front of a mirror. And while she received a lot of love from fans, there were a few responses that proved to be less than flattering and actually downright cruel. However, Teigen wasn't about to let any body shamers get her down.

After one troll commented that she was "shaped like Sponge Bob," the cartoon character, the 34-year-old model defended her "square" figure and how that hasn't seemed to stop her from reaching success. "I’ve been a square my whole life and let me tell you, it’s paid off nicely in many ways!" she wrote in response to one follower who came to her defense. And when another fan apologized for all the cruel comments and hate that was being sent her way, Teigen made it clear that she wasn't sweating the haters. "It’s ok I’ve been a rectangle my whole life and it’s gotten me pretty far!" she replied along with three heart emojis.

After seeing all of the backlash online, Jameela Jamil reached out to Teigen on Twitter to offer some support, writing, "I loved the video. Didn’t see a shape. Just saw fire." Teigen thanked her for the kind remarks and admitted that she's become used to her "right angle bod," adding, "You’d think people have seen it enough that it doesn’t shock them anymore but nope, lol."

Unfortunately, this isn't the first time Teigen has had to deal with online trolls. Just this past February, she posted an image of herself rocking John Legend-themed leggings on Instagram and was accused by one follower of photoshopping her butt to make it look bigger. "Maybe you've just never seen a girl in this position before but it's good for looking like you have an ass," she responded back, proving that she is now and forever the official comeback queen.

The list of examples goes on and on and isn't just reserved for her body image. From criticism about her parenting to insults directly from our commander in chief, Teigen deals with haters on a daily basis. Yet she refuses to let bullies silence her and continues to maintain a strong social media presence.