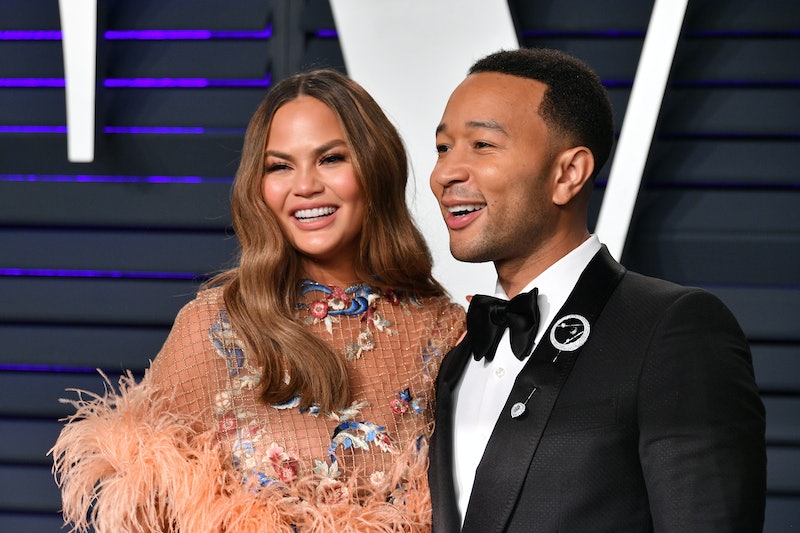 Chrissy Teigen and John Legend are a match made in heaven, and this week they raised the bar on what a solid relationship looks like. Chrissy Teigen and John Legend got matching tattoos, and the subject matter will give you feelings. On April 5, Teigen shared their tattoos on her Instagram, posting a snapshot of their arms. At first glance the tattoo looks like a scrawl of quick cursive or a heartbeat monitor. On closer inspection, you see that the tattoo consists of the names of each member of their family.

Teigen also got a tiny heart tattoo on the tip of her pointer finger, because the appointment was clearly all about love. In the Instagram photo that was posted, Teigen wrote the caption, "Hey guys please don’t talk to us unless u have tattoos we are a cool tattoo family now and we only want to talk to other tattoo families (srry if this seems harsh) ."

Most recently, Stone gave Lady Gaga her long-stemmed rose tattoo that climbed up her spine. Suffice it to say Teigen and Legend were in capable hands. "Thank you thank you @winterstone. You are not only incredibly talented but you are very kind and delightful and welcome over any time," Teigen added in her caption.

Stone wrote back underneath her unveiling post, writing, "Had so much fun tattooing you both! What an amazing loving couple, mom and dad you are! #tattoopeople#delicatelysharp." You have to love how Stone poked fun at Teigen's excitement with his #tattoopeople tag.

This new ink just might be Teigen's first tattoo. In 2016, leading up to her cover in Self magazine, Teigen answered some fan-asked questions as a promotion. One of the questions was if the supermodel turned cookbook writer had any tats.

"No, I do not have a tattoo," Teigen answered. "I would like to do a John something, but that’s always a bad luck thing.” It appears that she has changed her mind on that.

While couple's tattoos are often discouraged for the obvious reasons, it looks like Teigen and Legend took the risk. Plenty of couples have broken up right after their tattoo appointments, one of the most infamous cases (and cautionary tales) being Johnny Depp. After Depp broke up with his long-term girlfriend Winona Ryder in 1993, he famously changed his tat from "Winona Forever" to "Wino Forever."

But seeing how Teigen and Legend have been dating since 2007 and married since 2013, they're probably safe from any upcoming relationship upheavals. Like I said, a perfect match.