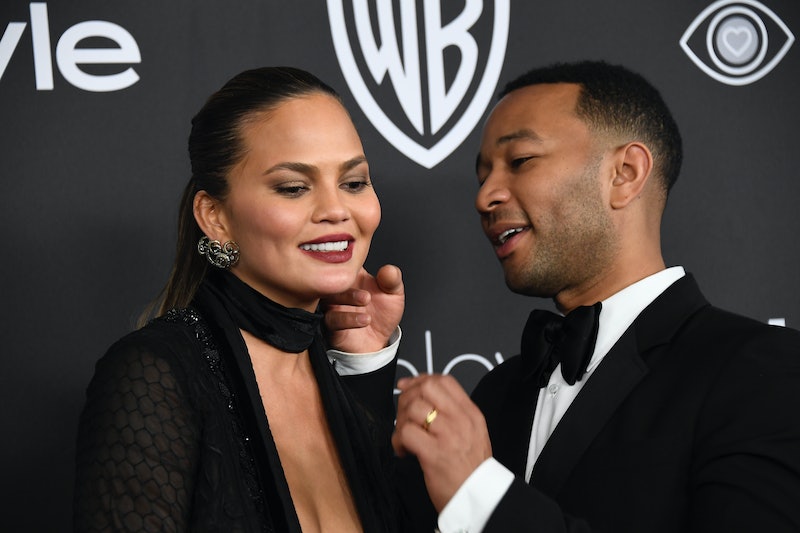 Not that I've been to any, but from magazines and behind the scenes pics, I've know that many lavish parties take place in Hollywood. Plenty of these are complete with ballgowns, tuxedos, chandeliers, ice sculptures — the works. But, perhaps no celebrity party is as cool as the understated Pajama Jam Party thrown by Chrissy Teigen and John Legend. As we all know, the first rule of truly enjoying a party is your level of comfort, and from the looks of it, this married couple totally nailed the whole thing.

Because they are so generous, both Teigen and Legend invited us all to the party (well, sorta) through their social media pages, where they showed off their matching fried chicken and Kentucky Fried Chicken onesies. Yes, onesies of those designs do actually exist and, yes, they can be pretty damn fashionable. As Teigen proclaimed, looking good while wearing one is no small effort, but it's possible. She tweeted, "The best part of a pajama jam party is my hair and makeup people trying to make a look out of a kfc onesie." They clearly succeeded, as the model looks like she could show up at a wedding with Colonel Sanders adorned on her one piece fuzzy suit, and no one would bat an eyelash.

Not to be outdone, Legend looked quite dapper in his onesie as well. He posed for Teigen's photo tweet and looked like he was actually in the middle of a real photo shoot.

It's all too good. In fact, if I were there, I would have anointed the two Onesie Prom King and Queen. They somehow made their silly getups look especially romantic when worn together, and they look totally in love looking upon each other.

To make the pajama party even better, Kourtney Kardashian came over and dressed her comfiest best, too. The reality star posted a picture of her snuggled between Teigen and Legend, and my jealousy knows no bounds.

Teigen also posted a short video on her Twitter of the morning after the party, and it looked... a lot like the night before. The benefits of being able to sleep in your party attire (with or without the "pretty filter").

And, in case you wanted to host your own similar celebrations, you should know the proper name of this kind of soiree. Legend dubbed the night the, "Deep fried Pajama Jammy Jam" and it's too good not to make this trend take off.