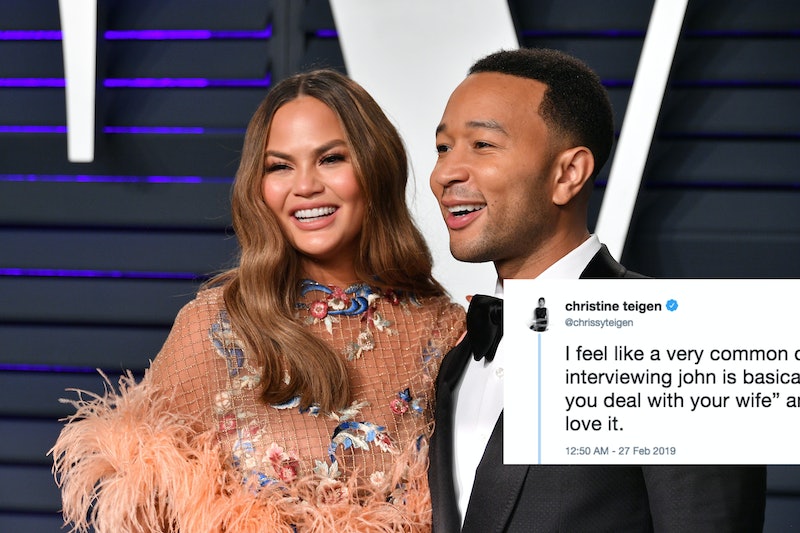 If you were presented with the opportunity to interview a famous figure who's a renowned singer, EGOT winner, and newly minted Voice coach, what might you ask? The possibilities are endless, right? Well, apparently, there's one question that John Legend has been getting a lot lately, and it's a real head-scratcher. Legend and Chrissy Teigen recently responded to the notion that he has to "deal with her" — yes, people are asking him how he "deals" with his wife — and like, seriously? Come on now.

Anyone who follows Teigen on social media knows that she's an open book. She never shies away from speaking her mind and has a knack for expressing herself in a way that's sharp, funny, and makes most fans say, "Same." Basically, if there were a list of "Celebrities You Want To Be Friends With IRL," she'd be at the top, without a doubt.

Some interviewers, however, seem to assume that Teigen's sparkling personality is like, a burden or something for her husband. At least according to a few recent tweets from the couple, who expressed their dismay at the idea that Teigen seeks permission from Legend before she speaks. (She definitely doesn't do that, by the way.)

"I feel like a very common question when interviewing john is basically 'how do you deal with your wife' and ... I don’t love it," Teigen tweeted on Feb. 26. She then started a thread on the topic, and further explained, "It happens a lot. 'does she ask you if certain things are okay to say?' ...it’s just very weird to me."

At one point, Legend chimed in on his wife's comments as well. "Yeah my wife is brilliant, savvy, funny as hell and clearly better at social media than me," he wrote. "She doesn't need my advice or censorship when it comes to how she communicates with the public." Yup. Nailed it. *Chef's kiss*

"wow can I have one thing without you being husband savior," Teigen jokingly responded. "jk love you (can I say this? please let me know)," she added, to which Legend quipped, "You have my permission. Thank you for asking." He gets it. And he gets her. And clearly loves her for it, too.

Teigen continued to vent her frustration about the seemingly common interview question and clarified that, no, she doesn't ask for Legend's permission before she speaks or tweets about certain things. Oh, and no, neither of them care. Period. The end. Thank you, next.

"he usually does the standard 'no...she knows what she’s doing...'" the star added in regards to how Legend handles the question. "but it’s not even that. It’s just that I am a different human than him?"

Teigen is undoubtedly a lot more outspoken than her husband when it comes to social media. Since they appear to have such different dispositions in general, it's understandable that people would be curious about the dynamics of their relationship.

To assume that Legend restricts her from voicing her opinions, or filters her personality, though ... well, it's totally antiquated, offensive, and misogynistic. Basically, do better, People Who Keep Asking Him This Question.